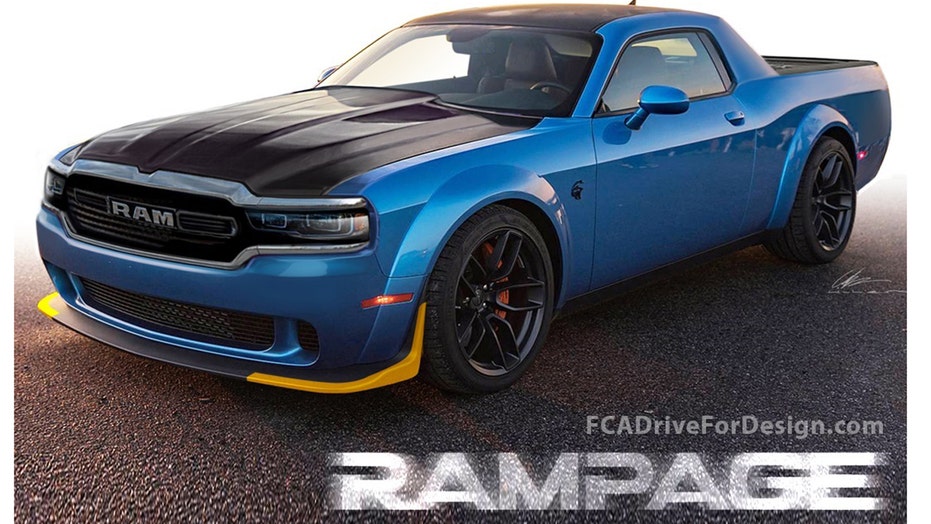 Now this is how you put the Ram in Rampage.

Fiat Chrysler Automobiles has reimagined the Dodge Challenger Hellcat as Ram pickup along the lines of a modern Chevrolet El Camino SS.

The muscle car-truck features a two-door, two-seat cabin, the grille from a Ram 1500 pickup and a short bed instead of a rear bench and trunk.

The 1982 Dodge Rampage had a similar layout, but was built on a compact car platform with front-wheel-drive and a four-cylinder motor.

Based on the “Hellcat” badge on the fender, the new one has a 717 hp supercharged V8 under the hood. Unfortunately, it has another feature that gives away the fact that it’s not destined for showrooms anytime soon.

In front, the ends of the chin splitter are painted yellow, which is an inside joke in the Mopar community since Dodge Challenger and Charger owners started leaving the protective yellow guards installed during shipping on their cars after delivery. The trend has become so divisive, that FCA design boss Ralph Gilles recently shared a rendering for a future Dodge Challenger that he said was rejected because the designer added yellow ends on the splitter.

So what’s the Rampage all about then? Turns out it’s just an eye-catching image dreamt up for a “sketch battle” the automaker is holding on its social media pages that challenges entrants to come up with an idea for a Ram of the future.

The deadline for entry is April 9 at 5 p.m. ET and there’s no prize, other than Internet fame. However, high school students can also enter an official Drive for Design contest that runs through April, with the top three finishers winning a trip to FCA’s design studio, a scholarship to the College for Creative Studies Precollege Summer Experience Transportation Design program and other prizes.