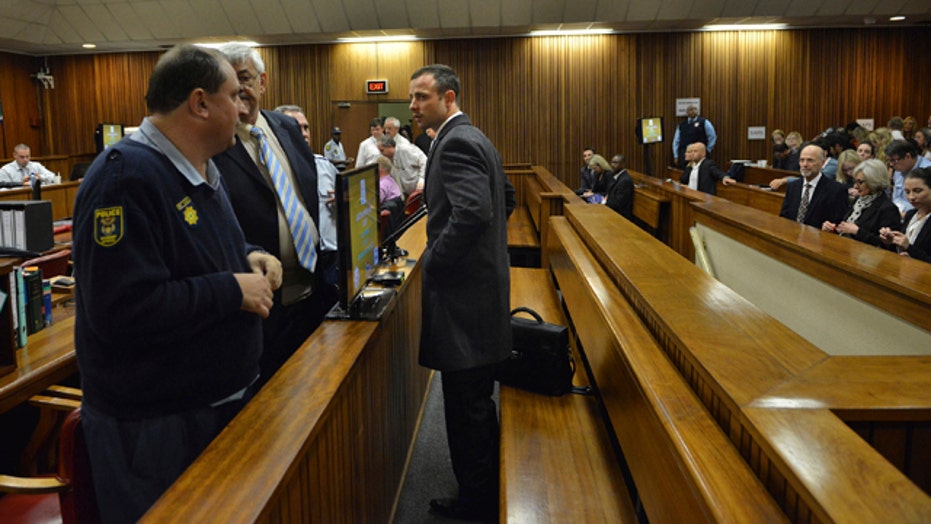 Witness breaks down during testimony at Pistorius trial

PRETORIA, South Africa – For two days, the witness in the murder trial of Oscar Pistorius kept her composure. Then, just as her testimony was about to finish, she broke down in tears at what she said was the memory of the screams she heard on the night that the double-amputee athlete fatally shot his girlfriend in his South African home.

Michelle Burger, a neighbor of Pistorius who took the stand on the second day of a trial watched around the world, remained calm through intense questioning by the chief defense lawyer. In a final exchange with the lead prosecutor on Tuesday, however, emotion washed over her as she recalled what she described as the terrified screams of a woman early on Valentine's Day last year.

"When I'm in the shower, I relive her shouts," Burger said in an apparent reference to her trauma just after the shooting, when a police captain took her statement. When Gerrie Nel, the prosecutor, asked her about her emotions at the time, she said the experience was "quite raw" and her voice broke.

Nel asked her how she was coping now.

Burger, a university lecturer, lives 193 yards from Pistorius' house, where his girlfriend, Reeva Steenkamp, died in what the runner said was an accident.

Burger testified that she heard a man and a woman shouting, then the sound of four gunshots. She said the woman's screams continued during the gunshots and quickly faded away after the final one. She was the first witness called by the prosecution, which contends that Pistorius intentionally killed Steenkamp after a loud argument.

Her testimony contradicts Pistorius' account. He says he fired four times through the toilet cubicle door, hitting Steenkamp three times in the head, arm and hip or side area after thinking she was a dangerous intruder. He has pleaded not guilty.

The defense contends that Burger may have been asleep when the gunshots were fired, and then mistakenly thought she was hearing gunfire when in fact it was the sound of Pistorius breaking the toilet cubicle door with a cricket bat after realizing he had shot his girlfriend.

During cross-examination of Burger, chief defense lawyer Barry Roux suggested that she was mistaken in saying that she heard a woman screaming and that it was actually Pistorius shouting for help in a high voice after accidentally shooting Steenkamp.

Giving sometimes grisly details of the killing of the 29-year-old model, Roux said Steenkamp was shot in the head, which would have resulted in brain damage and "no cognitive function" and so she wouldn't have been able to scream just after the last bullet struck, as Burger testified.

Roux said that an expert would later testify in the trial that "with the head shot, she (Steenkamp) would have dropped down immediately."

Burger disagreed. "I heard her voice just after the last shot," she said. "It faded away."

Her husband, Charl Johnson, also testified that "the last scream faded moments after the last gunshot was fired."

Burger also said that the man she heard -- before the sound of the gunfire -- was calling for help, a piece of testimony that muddied the prosecution's narrative that Pistorius was the aggressor. Challenged by Roux, Burger speculated that perhaps the voice was that of Pistorius ridiculing Steenkamp's calls for help. "Was it a mockery? I don't know. I'm not Mr. Pistorius," she said.

Pistorius, who faces a minimum of 25 years in prison without parole if convicted of premeditated murder, took notes during testimony and huddled with lawyers during adjournments. His collected demeanor contrasted with his sometimes distraught behavior during a bail hearing last year, when he sobbed in court. At one point on Tuesday he covered his ears, but it wasn't clear why.

Pistorius, 27, was born without fibula bones because of a congenital defect and his legs were amputated when he was 11 months old. He has run on carbon-fiber blades and was originally banned from competing against able-bodied peers because many argued that his blades gave him an unfair advantage. He was later cleared to compete. He is a multiple Paralympic medalist but he failed to win a medal at the 2012 London Olympics.

Steenkamp's mother, June, said in a television interview that she did not want to live with bitterness.

"I've lost everything that's important to me, and still, I can forgive. I can forgive," she told NBC's "Today" show. "One must forgive."

June Steenkamp was in court Monday, hoping to look Pistorius in the eye. But, she said, Pistorius "never looked my way, or he didn't have an opportunity to do that."

Judge Thokozile Masipa will ultimately deliver the verdict and decide on any sentence. South Africa has no trial by jury.

Tuesday's proceedings were interrupted when Masipa ordered an investigation into allegations that a South African television channel was broadcasting a photograph of Burger during her testimony -- against a court order guaranteeing privacy to witnesses who request it.

"I am warning the media," the judge said, "if you do not behave, you are not going to be treated with soft gloves by this court."