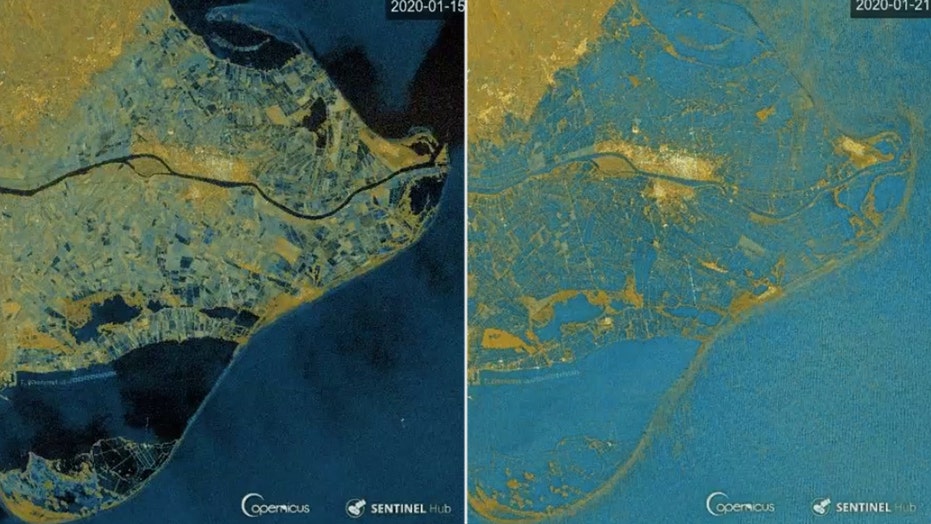 High winds knocked out power to thousands and also churned up massive waves that caused major damage to beaches around Barcelona, Valencia and on the Balearic Islands.

The Copernicus Emergency Management Service of the European Space Agency, which provides mapping products based on satellite imagery, said Wednesday the storm caused a surge that "ravaged" the Ebro delta south of Barcelona.

Before and after images of the Ebro delta flooded after the storm. (Copernicus Emergency Management Service)

Satellite photos from nearly a week apart show how much of the area was inundated with seawater.

Stormwaters surged nearly two miles inland and resulted in "severe damage" to rice paddies in the area, according to CEMS.

A man takes a snapshot of the waves hitting the breakwater in Barcelona, Spain, Wednesday, Jan. 22, 2020. (AP Photo/Joan Mateu)

The mayor of the delta region, Lluís Soler, described the flooding as "we've never had anything like this before," according to the BBC. The flooding impacted about 12 square miles of rice plants.

Fears increased that heavy rains expected later Wednesday could lead to several swollen rivers breaking their banks, among them the Onyar river that flows through the northeastern city of Gerona.

Massive waves and gale-force winds smashed into seafront towns, damaging many shops and restaurants and flooding some streets.

Residents were also told to avoid beachfront areas in the region due to the violent seas.

Traffic authorities said dozens of roads remained impassable because of the snow, including a major highway between the northeastern town of Figueres and the French border.

The storm has been blamed for at least seven deaths. The body of a missing man was found Wednesday in a flooded area near the town of Callosa, in southeastern Spain, the local Valencia regional government said.

It added that a woman was killed when her apartment building partially collapsed in the town of Alcoy, following heavy rains.

In the southeastern town of Nijar, a farmer was found dead in a plastic greenhouse that had been hit by a hail storm, according to the private Spanish news agency Europa Press.