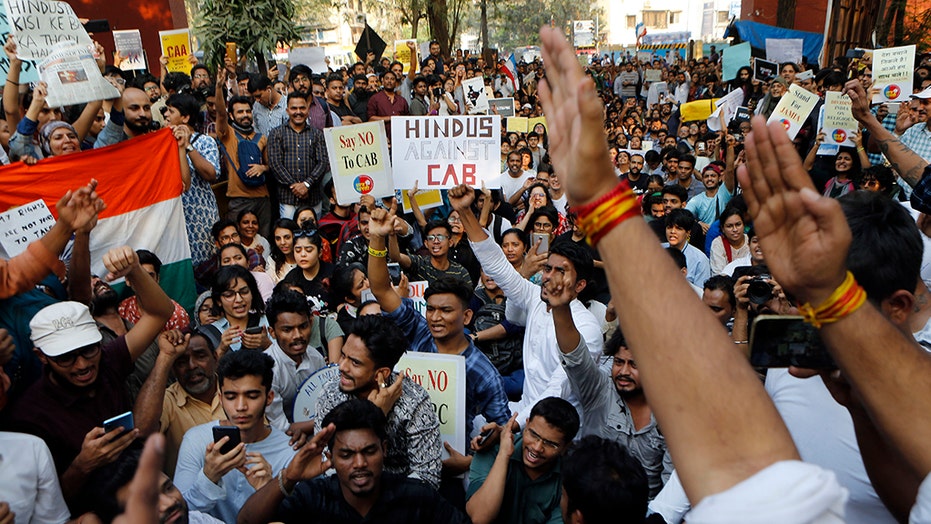 Fierce protests in cities across India continued Monday over a controversial new citizenship law that gives special treatment to Hindu and other non-Muslim migrants in the Asian nation.

Under the law, religious minorities such as Hindus and Christians in Bangladesh, Pakistan and Afghanistan who came to India before 2015, will have a path to Indian citizenship on the grounds that they were being persecuted in the Muslim-majority countries.

The Indian Parliament's decision to green-light the law last week has led to days of unrest and has presented a widespread challenge to Prime Minister Narendra Modi, who critics claim is pushing a partisan agenda.

As the demonstrations started up again Monday in Kolkata, New Delhi and Mumbai, Modi took to Twitter to try and ease growing tensions.

"No Indian has anything to worry regarding this act," he tweeted. "This act is only for those who have faced years of persecution outside and have no other place to go except India."

He added, "The need of the hour is for all of us to work together for the development of India and the empowerment of every Indian, especially the poor, downtrodden and marginalized. We cannot allow vested interest groups to divide us and create disturbance."

Overnight, protests were held at the Indian Institute of Technology as well as the Tata Institute of Social Sciences in Mumbai.

Anger with Modi and the parliament was further fueled by allegations of police brutality at a university in New Delhi on Sunday. Officers stormed Jamia Millia Islamia University and fired tear gas to break up a protest there. In all, up to 100 people were injured in the incident. There were similar protests at the Aligarh Muslim University in Uttar Pradesh.

The most violent protests took place in Assam, a state in the northeastern part of the country. According to local reports and wire services, mobs torched buildings and train stations, furious that the law would help Hindu immigrants from Bangladesh become lawful citizens.

D. Raja, a general secretary of the Communist Party of India, said Sunday, "The country is burning, the government has made a mockery of the constitution."

The protests, which have left six people dead, began in Assam on Thursday before spreading to other parts of India.

Bollywood celebrities like actress Konkona Sen Sharma and director Mahesh Bhatt have used their public platforms to criticize police action and have asked others to speak up.

"We are with the students! Shame on you @DelhiPolice," Sharma tweeted.

West Bengal Chief Minister Mamata Banerjee, who is a lightning rod of controversy herself and who has been accused of silencing the voices of journalists and students in Kolkata in the past, defiantly said she will not allow the new law in her state.