The Vietnamese woman accused of killing Kim John Un’s estranged half-brother more than two years ago in a daring chemical weapons attack could be released from prison as early as May after pleading to a lesser charge of causing hurt by potentially deadly means.

A Malaysian court sentenced Doan Thi Huong on Monday to three years and four months in prison, with her incarceration retroactively dated to the day of her arrest, Feb. 15, 2017 -- two days after authorities said Huong and an accomplice approached Kim Jong Nam in a crowded airport and smeared a nerve agent on his face.

However, her attorney says that, under Malaysian laws, Huong could be released by the first week of May if granted a one-third reduction in her sentence for good behavior.

Vietnamese Doan Thi Huong leaves Shah Alam High Court in Shah Alam, Malaysia, Monday, April 1, 2019. The Vietnamese woman who is the only suspect in custody for the killing of the North Korean leader's brother Kim Jong Nam pleaded guilty to a lesser charge in a Malaysian court Monday and her lawyer asked for leniency. (AP Photo/Vincent Thian)

“I am happy,” the 30-year-old Huong told reporters as she left the courtroom Monday, adding she thought the plea deal represented a fair outcome.

Siti Aisyah was released March 11 following high-level lobbying from Indonesia’s government. Huong sought to be acquitted after Aisyah was freed, but prosecutors rejected her request. 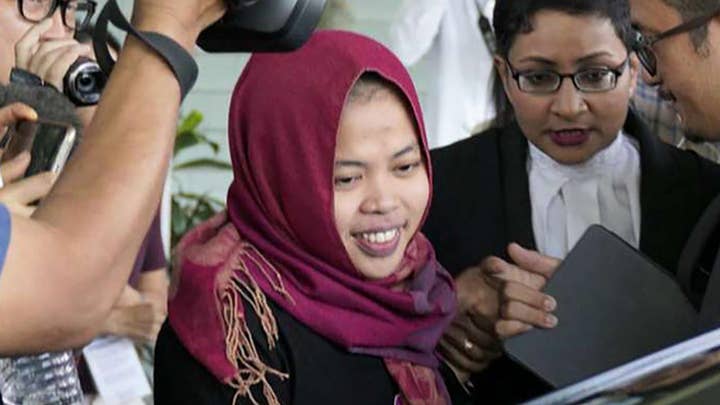 The two women had been the only suspects in custody after four North Korean suspects fled Malaysia immediately after the attack on Kim Jong Nam, which occurred in a Kuala Lumpur airport terminal on the morning of Feb. 13, 2017.

Aisyah and Huong had argued they were duped by North Korean spies. The pair maintained that they believed they were participating in a prank for a TV show and did not know they actually had been commissioned to take part in a high-profile murder. They were arrested and accused of smearing VX nerve agent on Kim Jong Nam’s face.

Lawyers for the women have previously said they were pawns in a political assassination with clear links to the North Korean Embassy in Kuala Lumpur, and that the prosecution failed to show the women had any intention to kill. Intent to kill is crucial to a murder charge under Malaysian law.

Malaysian officials have never officially accused North Korea and had made it clear they didn't want any trial politicized.

Huong's lawyer told the court Monday her guilty plea to the lesser charge showed she "has taken responsibility" for her actions. In asking for a lenient sentence, he also told the court that her move saved judicial time.

Hisyam Teh Poh Teik had urged the judge to take into account Huong's honesty, her acceptance of responsibility and the acquittal of her co-defendant.

"She is neither a criminal nor has the propensity to commit a crime," the lawyer said.

Huong, the youngest of five children, has a promising future with a degree in accounting, but she is also "naive and gullible," he said.

They "exploited her weakness and manipulated her to carry out their evil designs under the camouflage of funny videos and pranks," he said.