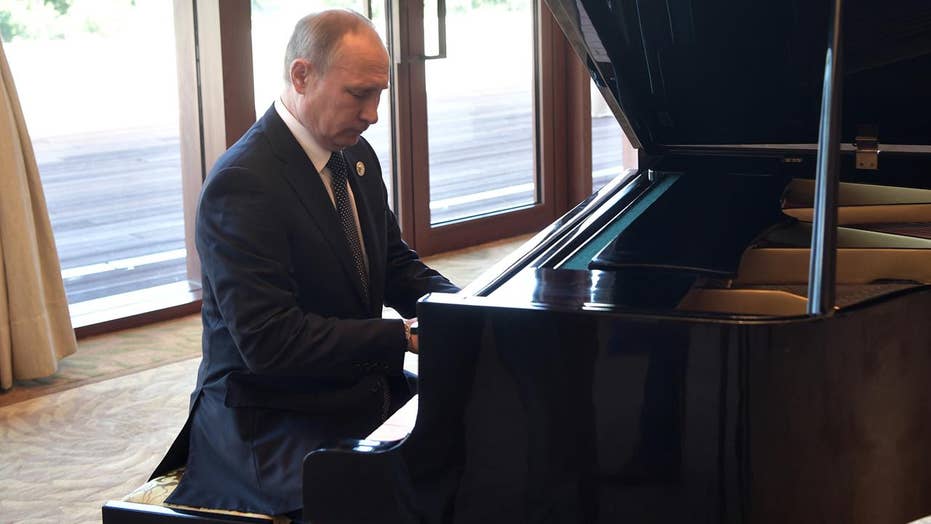 But does he know 'Chopsticks'? Putin shows off piano skills

Russian President Vladimir Putin was captured on video Sunday playing a few tunes on a piano while waiting to meet with Chinese President Xi Jinping.

Putin was in Beijing on a state visit to discuss a $1 trillion infrastructure plan aimed at reviving the ancient Silk Road. When Putin arrived at Xi’s residence, he passed the time by playing some songs on the piano.

Russian state television captured and posted a video of Putin playing excerpts of “Moscow Windows” and “City on the Free Neva,” both Soviet classics, according to NPR.

When asked at a news conference Monday in Beijing about the performance, Putin said he was playing the instrument to pass the time.

“It’s a pity that the piano was out of tune. It was quite hard to play, even for me, someone who plays with two fingers,” Putin said, according to Reuters.

WHERE DOES PRESIDENT TRUMP STAND ON RUSSIA?

When reporters asked Putin which song he would play when he meets with President Donald Trump, Putin said they “need to meet first, talk and then choose the tune to match.”

President Trump and Putin have not scheduled a meeting yet, but the two have spoken over the phone several times since Trump was elected, most recently on May 2. Last week, Trump met with Russian Foreign Minister Sergey Lavrov and Russian ambassador Sergey Kislyak at the White House.

This isn’t the first time Putin has showed off his musical skills. In 2010, he played the piano and sang "Blueberry Hills" with a jazz band at a charity concert.