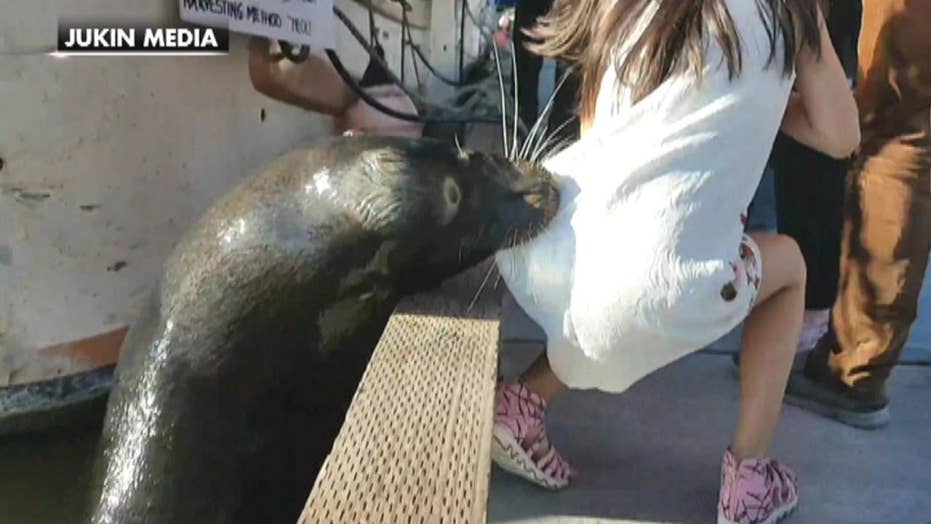 Canada's CBC News reports that an adult jumped into the water and rescued the girl, who was not hurt.

College student Michael Fujiwara recorded the terrifying scene at the Steveston Fisherman Wharf in Richmond, B.C., with his cell phone, according to the station.

“The sea lion actually attracted a lot of attention from the visitors there, including the young girl,” he told the Vancouver Sun. “She and her family, I guess, they came, they started feeding the animal bread crumbs or whatever it was, and then I guess the animal got a little too comfortable.”

The video shows the animal grabbing the girl who is wearing a white dress and sitting on the edge with her back to the water. Suddenly, she is seen being grabbed from behind by the sea lion and dragged into the water.

A family member dove in after her.

"They were pretty shaken up," Fujiwara told the CBC. "Her family were just in shock."

Andrew Trites, the director of the Marine Mammal Research Unit at the University of British Columbia said the sea lion wasn’t at fault.

"My first reaction to the video is just how stupid some people can be to not treat wildlife with proper respect," he told the CBC. "This was a male California sea lion. They are huge animals. They are not circus performers. They're not trained to be next to people.