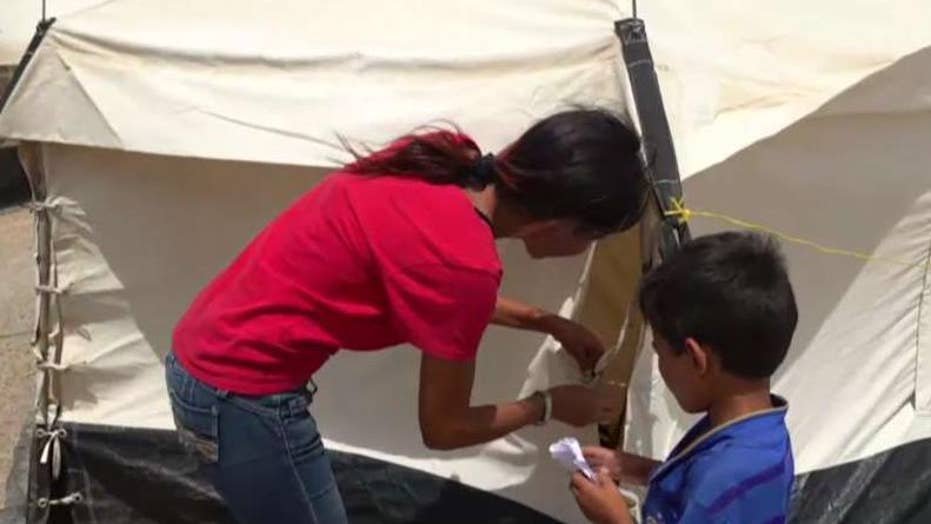 MAICO, Colombia – When you ask Colombians what La Guajira desert is known for, many will say a vacation.

It’s long been known as a tourist spot. But instead of vacationers, the desert in Maicao, Colombia is home to a growing number of Venezuelan migrants.

Among cities in the La Guajira region, the border city of Maicao tops the list as having one of the highest concentrations, per capita, of refugees and migrants from Venezuela, according to the United Nations Refugee Agency (UNHCR).

In March, the UN Refugee Agency opened a 60-tent facility which it calls an “Integrated Assistance Centre.” It was opened, the UN said, at the request of Colombian national and local authorities. About 300 people currently live at the center. Fox News toured the site this week to see the consequences of the Venezuelan crisis firsthand.

SLIDESHOW: INSIDE LOOK AT A COLOMBIA CAMP TAKING IN VENEZUELA REFUGEES

Dozens arrived by bus on Tuesday, and UN officials say they expect to reach capacity by Thursday.

US LIFTS SANCTIONS FOR VENEZUELAN GENERAL WHO DEFIED MADURO

“It’s a transient center that provides basic services for a total of 350 people at a time – basic services like food, water, temporary accommodation, and protection services,” said Marco Rotunno, communications officer for UNHCR.

Rotunno said 50 percent of the center’s residents are children.

Noelis Navas is 11 years old. She told Fox News she and her two little brothers came to the center last week. She said they left Venezuela, with their mother, a couple of months ago.

“We had to work very hard, selling candy to get money for the bus tickets [to Colombia],” Noelis said.

Once in Colombia, the family had nowhere to stay and ended up sleeping on the streets. Noelis’ mother, Maria Delcarmen Rodriguez, told Fox News it was devastating.

“I would cry at night,” Delcarmen Rodriguez said. “But I didn’t want to let my kids see me crying.”

Life in Colombia was far from good, but they say life in Venezuela was worse. More often than not, their days were filled with hunger and fear.

When asked if it was scary, 11-year-old Navas told Fox News: “Yes. There’s a lot of crime happening there, people want to kill and steal for food.”

“I was in sixth grade,” she explained. “How can I study if I can’t eat? In any second I could faint because I wouldn’t eat. The light was going away. There wasn’t any water.”

Many of the residents of UNHCR's refugee center were going hungry in Venezuela and didn't feel safe in an unstable country.  (Stephanie Bates/Fox News)

Now, they say, things are looking up. Delcarmen Rodriguez said she has faith for today and tomorrow.

“I’ve got a lot of faith in God,” she said. “Venezuela will prevail, with or without [President Nicolás] Maduro.”

At the UN center, Delcarmen Rodriguez and her children have something they didn’t have last week: a warm meal and hope.

Noelis Navas said when she grows up she wants to be a veterinarian.

“I like chickens,” she said with a giggle, “because they are very cute.”

UN Refugee Agency has plans to expand the center and say they expect to double the number of beds in September, eventually growing to a capacity of 1,400.