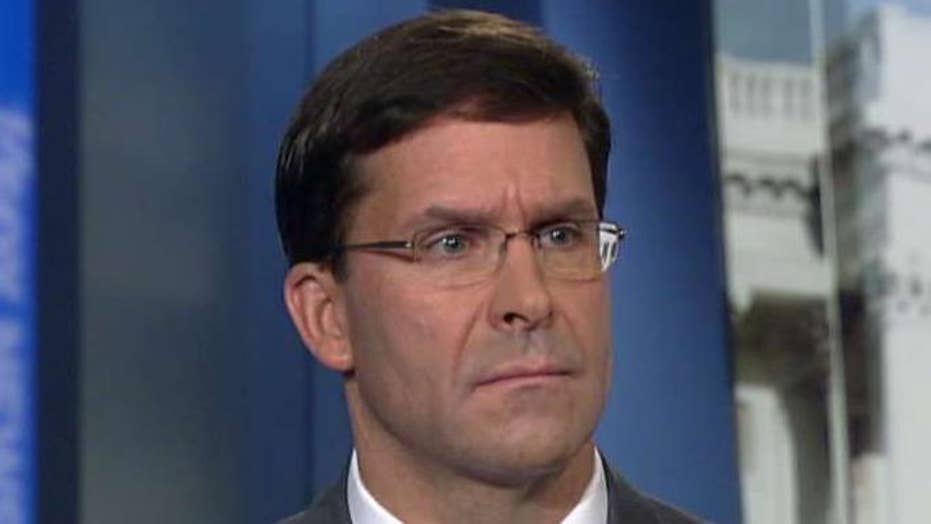 In addition, the U.S. military will continue its efforts to prevent a resurgence by Islamic State group (ISIS) terrorists, he said.

“Things could change between now and whenever we complete the withdrawal,” Esper told reporters while flying to the Middle East from Washington, according to the Associated Press, “but that’s the game plan right now.”

“Things could change between now and whenever we complete the withdrawal, but that’s the game plan right now.”

The U.S. departure from Syria will take “weeks not days,” Esper said, and involve both aircraft and ground convoys as about 1,000 troops relocate, Reuters reported.

Esper’s comments were the first specific details on where American troops will go as they leave Syria, according to the AP. Fox News reported last week that President Trump said only that troops would be redeployed "in the region."

The 55-year-old Pentagon chief, who assumed the office permanently July 23 after serving as acting defense secretary for about three weeks following the departure of former Defense Secretary James Mattis, said he has spoken to his Iraqi counterpart about the plan to shift the more than 700 troops from Syria into western Iraq, the AP reported.

Esper, who previously served as Army secretary, did not rule out the possibility that U.S. forces relocated to Iraq could still conduct counterterrorism missions inside Syria. But he said those details will be worked out over time.

The U.S. defense chief was traveling as a fragile cease-fire, negotiated by the U.S. and Turkey, was underway in Syria – but according to Reuters some Turkish military vehicles crossed into Syria on Saturday, and Turkish officials claimed aboyt 14 “provocative attacks” had been launched from the Syrian side.

In Iraq, U.S. troops were heading to a country that has seen violent political protests in recent week, leading to more than 100 deaths, Reuters reported.

Trump ordered the withdrawal of most of the U.S. troops in Syria after Turkish President Recep Tayyip Erdogan said his forces were about to invade Syria to push back Kurdish fighters that Turkey views as terrorists.

Critics of the president say the plan amounts to an abandonment of the Kurds, who have helped the U.S. military combat ISIS, but Trump argued that the Kurds have not always been the pro-American allies their supporters claim them to be.

Meanwhile, a group of House Democrats, accompanied by one Republican, traveled to Syria neighbor Jordan on Saturday, where they held talks with Jordan’s King Abdullah II and other Jordanian leaders about the Syria situation. Results from those talks were not immediately known early Sunday in the U.S.