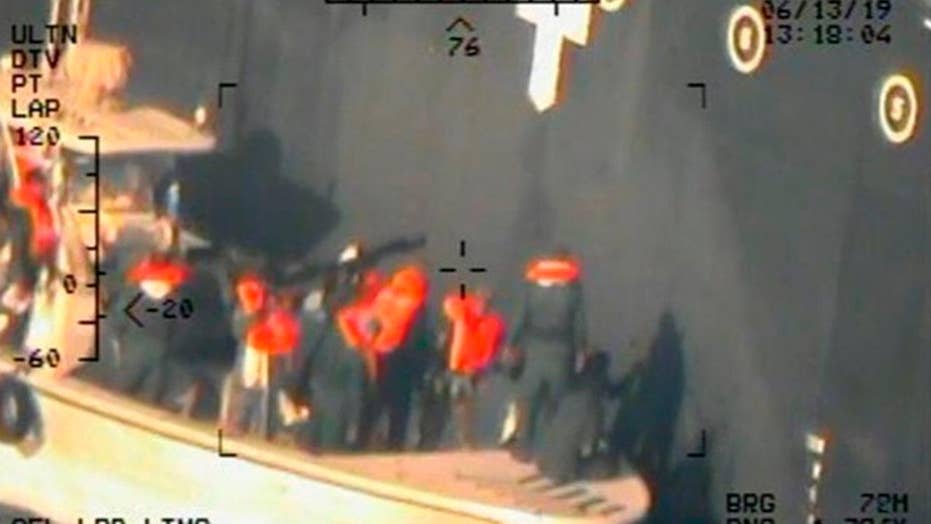 The Defense Department releases 11 images from the attacks on two oil tankers in the Gulf of Oman as they point the finger at Iran; Lucas Tomlinson reports.

A squadron of American F-15E Strike Eagles arrived in United Arab Emirates on Thursday as part of reinforcements against the Iranian threat as announced last month by the Pentagon.

President Trump announced the additional military presence in the Middle East last month, saying additional 1,500 troops will be sent together with a squadron of U.S. Air Force jets.

The arrival of the U.S. jets on Thursday coincided with an attack on oil tankers in the Strait of Hormuz, an attack that the U.S. says was perpetrated by the Iranian regime.

Secretary of State Mike Pompeo said Iran was responsible for the “blatant assault” on oil tankers, an assessment he based on “intelligence, the weapons used, the level of expertise needed to execute the operation, recent similar Iranian attacks on shipping, and the fact that no proxy group operating in the area has the resources and proficiency to act with such a high degree of sophistication.”

President Trump, meanwhile, told “Fox and Friends” Friday that the attack had “Iran written all over it.’

“Iran did do it and you know they did it because you saw the boat,” he said, before pointing to the video showing the Iranians removing the unexploded mine. “They're a nation of terror and they've changed a lot since I've been president, I can tell you,” he added.

U.S. officials also released a video on Friday supposedly showing Iran’s Revolutionary Guard removing an unexploded limpet mine from one of the vessels.

U.S. Central Command (CENTCOM) released additional images Monday showing the aftermath of mine attacks against the oil tankers, including some images purporting to show Iranian forces removing an unexploded device from the hull of one of the vessels.

Acting Defense Secretary Patrick Shanahan said he had also approved a request from CENTCOM to send approximately 1,000 additional troops to the Middle East "to address air, naval, and ground-based threats" in the region.

None of the announced 1,000 troops are U.S. Army or Marine Corps infantry or U.S. Special Operations Forces, according to U.S. officials. All the additional troops are support troops for the fighter squadrons currently deployed, the Patriot anti-aircraft missile batteries and engineers.