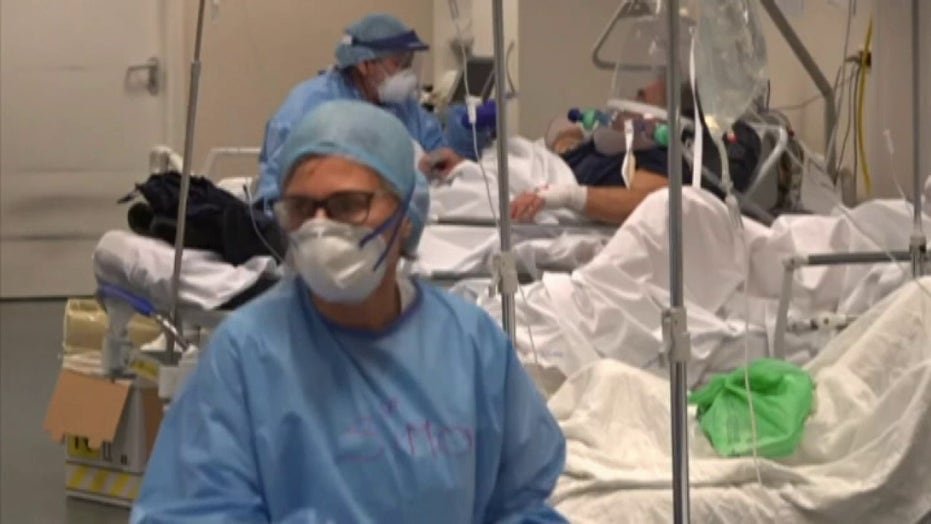 Three American couples that arrived in India earlier this month to finalize long-awaited adoptions are now suddenly stuck in the country until at least April 15 because of the newly implemented national coronavirus lockdown.

They are now pleading with the U.S. Embassy or any airline to fly them and an estimated 1,000 Americans stuck in India back to the United States.

Chris Santa Maria and his wife Caeli and their adopted daughter from India. (Family Photo)

“We knew there would be just unknowns with the adoption process, but we definitely weren’t anticipating the whole country to completely shut down,” Chris Santa Maria, 30, told Fox News.

The American couples are all coincidentally staying at the same New Delhi hotel, which they’re not allowed to leave because of the Prime Minister Narendra Modi’s strict three-week coronavirus lockdown lasting until at least the middle of April.

The couples say they’re at the mercy of their hotel for food and water, which so far has been hospitable. However, food is starting to run low and they’ve begun to mildly ration any freshwater bottles they get their hands on. They say the streets and stores are being guarded.

“As Americans, you know when we’re used to being able to get clean water whenever we want, it starts a little bit of panic within you,” Rose Barnes, 34, told Fox News.

Michael Cannon and Rose Barnes. 34, and their daughter Camille are stuck in India after going to the country to adopt a child. (Family Photo)

“We don’t know for sure, but it seems like the hotel is kind of running out of food, like our portions have gotten smaller,” Santa Maria said.

The couples praise the U.S. Embassy in New Delhi but say so far there’s been little hope of a flight to bring them home.

CORONAVIRUS SENDS INDIA INTO LOCKDOWN AS TRAINS HALTED, MODI SAYS 'PLEASE SAVE YOURSELF'

India’s 21-day shutdown affects the country’s 1.3 billion residents and is considered the world’s largest coronavirus lockdown. Johns Hopkins University reports that there have been at least 716 coronavirus cases in India – but the country’s dense cities are a major concern for the spread of the highly contagious virus.

All three couples say they arrived in India earlier in March and were fully aware of the growing coronavirus scare – but they did not expect the situation to escalate to India’s national lockdown.

“We got the visa, we got everything we need to fly out, and now there’s this 21-day lockdown in India where now we can’t even – literally can’t get out,” Santa Maria said.

Santa Maria and his wife, Caeli Santa Maria, 30, are from the Chicago area and adopted an Indian daughter but they have a 2- and 4-year-old back home.

“With just all the coronavirus, all the fear and anxiety along with that, and you know being away from our children, being away from families is really difficult -- so we would just ask if there’s anything these airlines can do to get some flights here to India to go home that would be much appreciated,” Chris Santa Maria said.

Barnes and Michael Cannon, 34, are from California and brought their first adopted daughter, 8-year-old Camille, with them to India – but because of the COVID-19 pandemic, they have not been granted the ability to take their newly adopted daughter back home with them. They’ll have to return to the United States, quarantine, then make plans to return to India for several weeks again to finalize the adoption.

“It’s really hard to think of going through this very difficult scenario and not even having the prize at the end of it,” Barnes told Fox News. “Going through it and knowing that after this travel ban is lifted, we still have to come back and do this whole trip over again.”

Michael and Whitney Saville and their adopted daughter Grace. They are all stuck in India because of the country's coronavirus lockdown. (Family Photo)

Michael, 33, and Whitney Saville, 31, are from the Atlanta area. They were able to officially adopted their daughter, Grace, but they have three boys between the ages of 7 and 4 back in the U.S.

“To have kids on two separate continents right now has been difficult so we just want to get home as fast as we can,” Whitney Saville said.

She said she and her husband tried to immediately book a flight home when word of India’s lockdown got around.

“We actually tried to get Mike a flight home to be with our children at home and we just weren’t able to get anything. Everything booked up so quickly,” she said. “So there are just a lot of people who want to get home and just aren’t able to.”