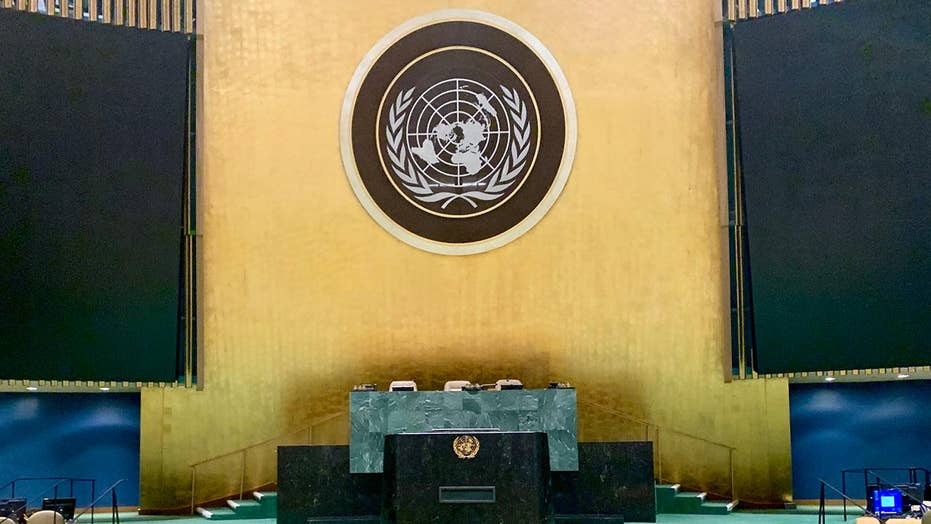 UN General Assembly kicks off after months in the making

As world leaders descend on New York City for the 74th United Nations General Assembly, behind the scenes thousands of workers prepare for a jam-packed week of events. Logistics of finding space for over 600 meetings, credentialing thousands of international journalists and making sure everyone in and around the UN is safe when 95% of the world’s leaders are in the same place is a huge undertaking—and planning began as early as October, right after last year’s UNGA.

UNITED NATIONS -- It's been almost a year of planning for one of the most high-security events in the world.

Thousands of law enforcement officers will be securing New York City as many of the world's leaders -- some highly controversial and greatly despised -- descend on New York City for the 74th United Nations General Assembly. While it holds heavy political weight, it poses a logistical challenge for a city accustomed to big events and heightened security.

Nearly 200 world leaders will be rubbing elbows and making their points in front of the international community at UNGA, as thousands of workers continue to prepare for a jam-packed week behind the scenes.

“Each of the members has their own set of agendas, their own needs in terms of infrastructure and support…the United States all the way down to the tiniest island state … they are completely swamped trying to prepare for this,” said Jonathan Wachtel, global affairs analyst and former communications director for the U.S. Mission at the U.N.

The 74th opening session of UNGA, which lasts a few weeks, started on Sept.17, but the general debate begins Tuesday.

Wachtel called UNGA the world series of international diplomacy and says, just like a baseball game, unexpected things are always bound to happen.

“There are a lot of personalities here," Wachtel said. "We've had weird situations in which [former Libya Prime Minister] Muammar Qaddafi, for instance, spoke endlessly at the podium in the UN General Assembly and made a translator nearly collapse from exhaustion. [Former Soviet Union leader] Nikita Khrushchev banged his shoe on the General Assembly podium back in the 1960s and a few years ago, the Venezuelan president, Hugo Chavez, spoke right after the U.S. president, George W. Bush, and said that the podium smelled like sulfur.”

A total of 640 meetings on a variety of world issues were requested for this year's General Assembly. (Allie Raffa/Fox News)

UN officials begin some preparations as early as October, right after the last UNGA ended, but planning kicks into high gear over the summer months.

Logistics of finding space for more than 600 meetings on humanity’s greatest challenges — from universal healthcare coverage to the threat of climate change — can be tricky, along with having enough translators on hand for each of them.

“Our legal office is involved in events, our economics department, there's the other offices that deal with the logistics, a squadron of interpreters to make sure that everyone understands what's happening at all the meetings," said Farhan Haq, deputy spokesman for the UN Secretary-General. "There are hundreds for the six official languages of the UN. It's a very busy time for them…a very busy time.”

From making seating arrangements for high-level meetings and preparing food and catering services to providing Wi-Fi and power for thousands of international journalists and photographers, every single department is involved in making the event run smoothly.

“We received close to 4,000 requests from members of the media—that's everybody from the big mainstream media organizations to bloggers. Those numbers are on top of the journalists that cover the UN on a year-round basis…” said Tal Mekel, chief of the United Nations Media Accreditation and Liaison Unit, or MALU.

Police said they expect more than 60 demonstrations outside the United Nations, foreign consulates and Trump Tower at various times during the week. (Allie Raffa/Fox News)

But the biggest test during the world’s highest diplomatic platform is the necessary round-the-clock security surrounding the UN and the diplomats.

With 95 percent of the world’s leaders in more than 100 motorcades at any given time around one of the busiest and largest cities in the world, keeping everyone at the UN and around the city safe is a herculean task for law enforcement.

"Since the end of last year's General Assembly, we've been planning how to best protect the various sites and all the people inside them, while also minimizing the impact on New Yorkers," said New York Police Commissioner James O'Neill at a recent news conference.

The event costs the NYPD alone $20 to $30 million and can impose complete lockdowns in Midtown Manhattan, setting off gridlock as diplomats navigate their way to and from the UN building.

“Many who are flying in on private aircraft come into smaller airports, like Teterboro,” in New Jersey, said Brian Higgins, a former Bergen County, N.J., police chief. “So the movement of those diplomats through this New York City area is a very big undertaking. It is a massive coordination effort with other entities.”

Higgins said just about every location world leaders travel to is swept by an explosives team.

“Just think of the amount of resources for just the explosives threat alone, then you have quick response forces and some smaller arms response teams, the average New York City police officer, UN-provided security and all these other security forces coming with their national leader,'' Higgins said.

Robert McCrie, a security expert and professor at John Jay College of Criminal Justice, said the event has a record of safety that law enforcement officials work hard to preserve.

“Every one of those heads of state has someone or some group that doesn't like them…being head of a state is a dangerous business,” he said. “But there has been no serious incident during the week of the General Assembly to anyone of significance and that's something that all the persons in this community concerned with security want to maintain.”

Haq said the result is always worth the hassle.

"It's a very useful event, because it's a wakeup call to us to understand and to play our role as citizens, not only of the United States but citizens of the world," said former communications director to the U.S. Mission to the U.N. Jonathan Wachtel. (Allie Raffa/Fox News)

Staffers say because of a constantly shifting political climate, they’ve learned to be prepared to make last-minute adjustments to any event and to always expect the unexpected.

“For example, the world leaders’ speaking order is reflected in the list of speakers to the General Assembly by order of seniority but sometimes the country's position on that may change, depending on whether they come last minute with their prime minister or foreign minister or the head of their delegation here in New York,” said Haq. “There are bits of drama, but we’re the stage on which this is happening.”