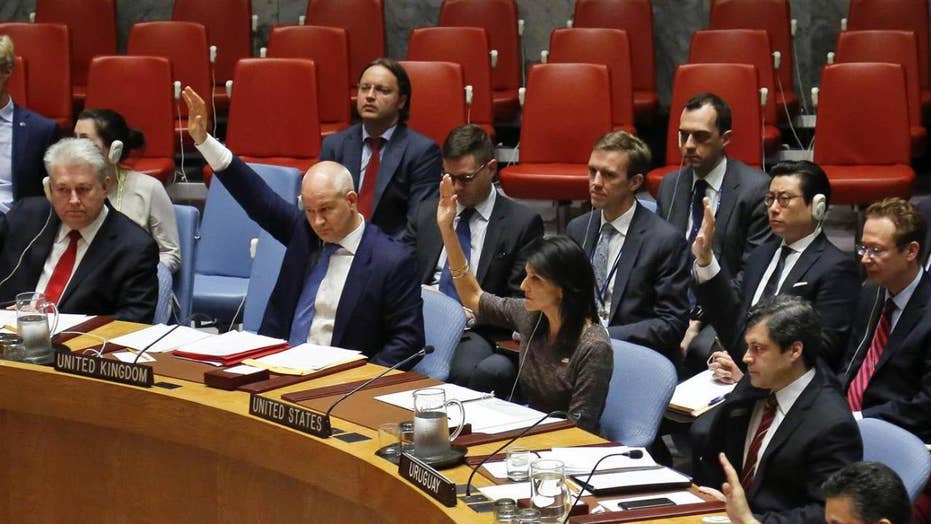 Pyongyang says act was akin to war; Lucas Tomlinson reports from the Pentagon.

North Korea’s regime is planning to launch a satellite that observers warn could be a Trojan horse for more weapons tests,  a South Korean newspaper reports.

North Korea is being sanctioned by the United Nations over its nuclear and missile launches and is currently not allowed to carry out any launches using ballistic missile technology, which includes satellites.

“Through various channels, we've recently learned that the North has completed a new satellite and named it Kwangmyongsong-5,” the Joongang Ilbo daily reported, quoting a South Korean government source.

The isolated North Korean regime has called the sanctions an “act of war” that’s been “rigged up the U.S.”

A view of the Hwasong-15's test. State media said that the missile was launched from a newly developed vehicle, and that the warhead could withstand the pressure of re-entering the atmosphere. (Reuters)

The South Korean newspaper reports that the communist regime’s plan is to put a satellite with cameras and telecommunication devices into orbit.

Pyongyang launched its Kwangmyongsong-4 satellite in February 2016, which much of the international community viewed as a disguised ballistic missile test.

A spokesman for the South Korean military reportedly said there was “nothing out of ordinary at this moment,” but added that Seoul was watching out for any provocative acts, “including the test of a long-range missile disguised as a satellite launch.”

North Korea is believed to have successfully put a satellite into orbit in December 2012 after years of failures dating back to 1998.

Tensions between the United States and North Korea have soared as the isolated regime has continued to test atomic and intercontinental ballistic missiles in defiance of the international community, most recently on Nov 29.

“The North Korean regime's continuing unlawful missile launches and testing activities signal its contempt for the United States, its neighbors in Asia, and all members of the United Nations," U.S. Secretary of State Rex Tillerson said in a statement this month to the United Nations. "In the face of such a threat, inaction is unacceptable for any nation."