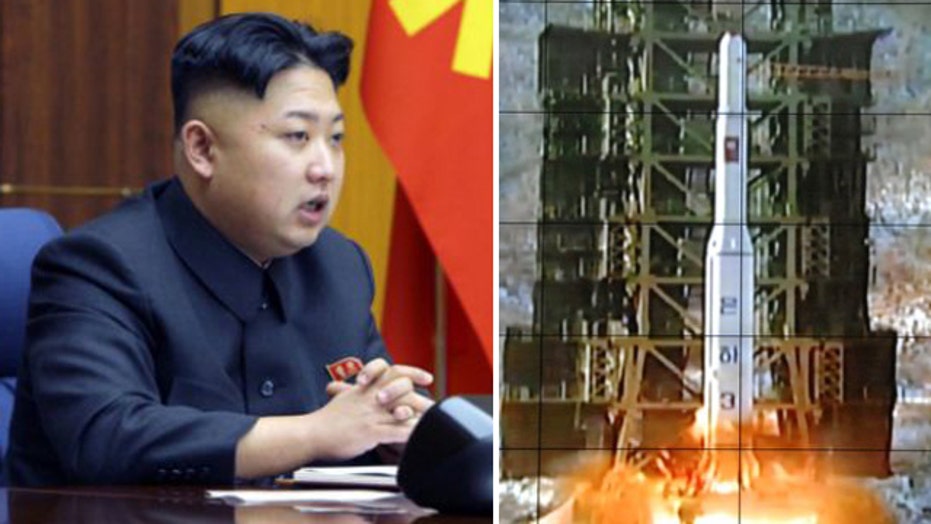 "The top priority now is to defuse the tensions, bring down heat ... bring the situation back on the track of diplomacy, on negotiations," Li said.

Immediately before the vote, an unidentified spokesman for Pyongyang's Foreign Ministry said the North will exercise its right for "a preemptive nuclear attack to destroy the strongholds of the aggressors" because Washington is "set to light a fuse for a nuclear war."

The statement was carried by the North's official Korean Central News Agency, which issued no immediate comment after the Security Council vote.

In Pyongyang, Army Gen. Kang Pyo Yong told a crowd of tens of thousands that North Korea is ready to fire long-range nuclear-armed missiles at Washington, which "will be engulfed in a sea of fire."

The White House responded by saying the U.S. is fully capable of defending itself against a North Korea ballistic missile attack.

Although North Korea boasts of nuclear bombs and pre-emptive strikes, it is not thought to have mastered the ability to produce a warhead small enough to put on a missile capable of reaching the U.S. It is believed to have enough nuclear fuel, however, for several crude nuclear devices.

The United States has long been concerned that North Korea could eventually pose a missile threat to U.S. territory. The Defense Department first began to operate a ground-based missile defense system in late 2004 with such a potential threat in mind.

"Taken together, these sanctions will bite, and bite hard," U.S. Ambassador Susan Rice said after the vote.

"North Korea must wake up from its delusion of becoming a ... nuclear weapons state and make the right choice," said South Korea's U.N. Ambassador Kim Sook said. "It can either take the right path toward a bright future and prosperity, or it can take a bad road toward further and deeper isolation and eventual self-destruction."

Tensions have escalated following a rocket launch by Pyongyang in December and its third nuclear test on Feb. 12. Both acts defied three Security Council resolutions that bar North Korea from testing or using nuclear or ballistic missile technology and from importing or exporting material for these programs.

The new sanctions resolution is the fourth against North Korea since its first nuclear test in 2006.

It condemns the latest nuclear test "in the strongest terms" for violating and flagrantly disregarding council resolutions. It bans further ballistic missile launches, nuclear tests "or any other provocation" and demands that North Korea return to the Nuclear Nonproliferation Treaty. It condemns all of North Korea's ongoing nuclear activities, including its uranium enrichment.

But the resolution also stresses the council's commitment "to a peaceful, diplomatic and political solution" to North Korea's nuclear program and urges a resumption of six-party talks.

The success of new sanctions could depend on enforcement by China, where most of the companies and banks that North Korea is believed to work with are based.

The resolution strengthens inspections of suspicious cargo heading to and from the country and calls on states to step up "vigilance" of possible illegal activity by North Korean diplomats. In a measure targeted at the reclusive nation's ruling elite, the resolution bans all nations from exporting expensive jewelry, yachts, luxury automobiles and racing cars to the North.

All countries would now be required to freeze financial transactions or services that could contribute to North Korea's nuclear or missile programs.

The resolution identifies three individuals, one corporation and one organization that will be added to the U.N. sanctions list. The targets include top officials at a company that is the country's primary arms dealer and main exporter of ballistic missile-related equipment, and a national organization responsible for research and development of missiles and probably nuclear weapons.

To get around financial sanctions, North Koreans have been carrying around large suitcases filled with cash to move illicit funds. The resolution expresses concern that these bulk cash transfers may be used to evade sanctions.

The resolution also bans all countries from providing public financial support for trade deals, such as granting export credits, guarantees or insurance, if the assistance could contribute to the North's nuclear or missile programs.

The resolution also requires states to inspect suspect cargo on their territory and prevent any vessel that refuses an inspection from entering their ports. And a new aviation measure calls on states to deny aircraft permission to take off, land or fly over their territory if illicit cargo is suspected to be aboard.