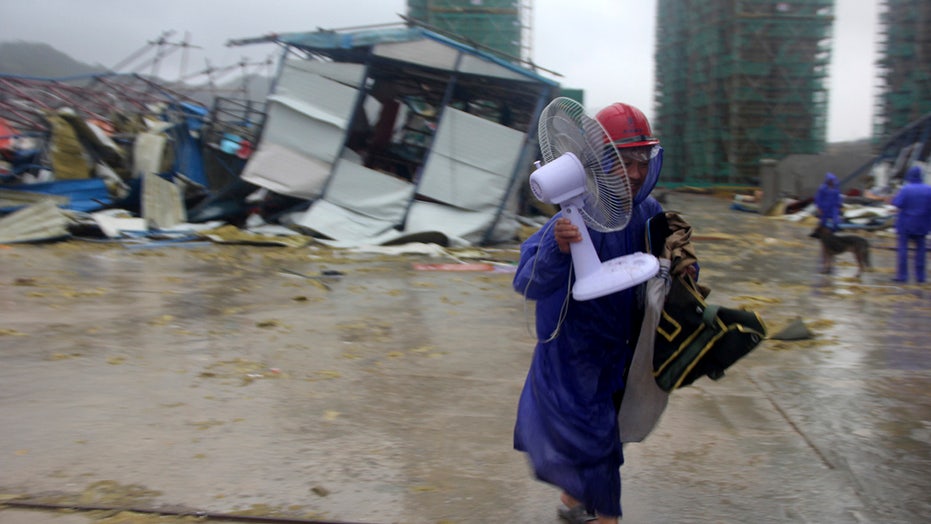 Nearly two dozen people have died and more than 1 million forced from their homes as Typhoon Lekima continued to batter down on China’s eastern coastline.

The deadly storm made landfall Saturday morning in Wenling, which is between Taiwan and mainland China’s financial capital Shanghai.

Lekima was initially designated a “super typhoon” but it weakened slightly before making landfall with sustained winds of 116 miles per hour.

In this Aug. 9, 2019, photo released by Xinhua News Agency, a man uses his mobile phone to record waves crashing on the shore as typhoon Lekima approaches the Shitang Township of Wenling City in eastern China's Zhejiang Province. Typhoon Lekima stuck the coast south of Shanghai, knocking down houses and trees. (Xinhua via AP)

China's state-run Xinhua news agency reported that at least 22 people were killed while more than 200 houses collapsed and 3,200 were damaged by the storm’s strong winds and heavy rain.

The deaths occurred in Yongjia County on the outskirts of Wenzhou, a major port city, the report said.

A fatal landslide happened when a dam broke in the region and a river that was blocked rose more than 30 feet before breaking through the debris and flooding nearby homes.

More than 1 million people were evacuated before the storm struck – which included 253,000 in Shanghai alone.

Emergency crews battled to save stranded motorists from floods.

Authorities said the storm is expected to weaken further before it reaches Shanghai, but warn that major flooding is still a concern.

“Now the disaster zones are mainly in the rural-urban integration zones,” Fu Songliang, head of a rescue for Ningbo City’s fire service, told Reuters. “These are low-lying areas. When the flooding from mountainous areas converges and comes down, these areas are quite seriously affected.”

State TV said 3,023 airline flights in Shanghai, Hangzhou and other cities and some train services were canceled. Authorities in Shanghai also shut down the high-speed magnetic levitation train to Pudong International Airport.

Meanwhile, Shanghai Disneyland was shut for the day.