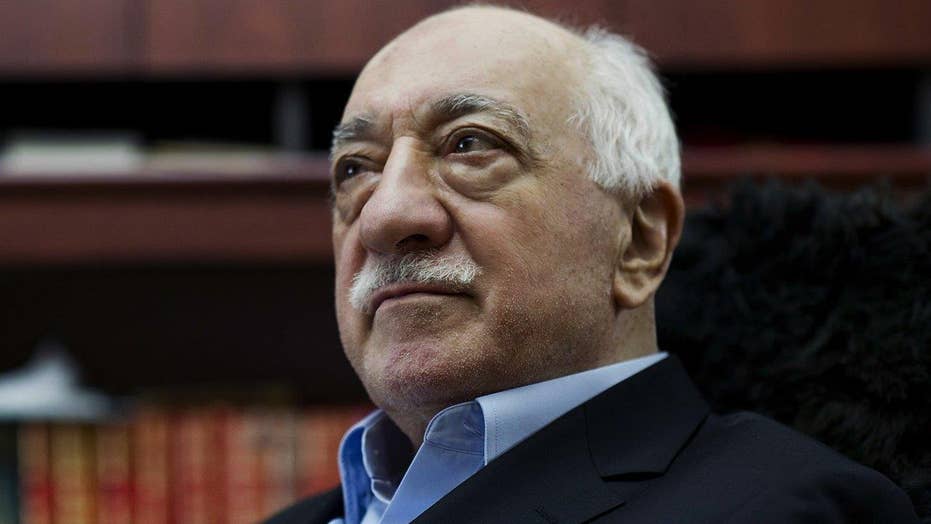 Extradition talks for Turkish cleric living in US

Sources say discussions expected to go on for months

As Turkey presses the Obama administration to hand over a Pennsylvania-based cleric, claiming he spearheaded last month’s coup attempt, the Muslim nation's media is pointing an accusatory finger at a respected American academic -- and in a bizarre twist, an infamous San Quentin death-row inmate convicted of killing his wife.

Once a key ally of the U.S., Turkey has become a hotbed of anti-American rhetoric, with government-controlled media openly accusing the CIA and other Americans of taking part in a plan to assassinate President Recep Tayyip Erdogan. The accusations have dominated headlines in newspapers in the wake of the plot, and have included such improbable claims as the involvement of California death row prisoner Scott Peterson.

“I am stating this very clearly: The United States of America planned to directly murder Turkey’s president and implemented this plan,” said Ibrahim Karagul, editor-in-chief of a largely circulated pro-Erdogan newspaper, Yeni Safak.

Turkey accuses Pennsylvania-based cleric Fethullah Gulen and his followers within Turkey’s government and military of fomenting the coup. Gulen and Erdogan, once friends and political allies, became sworn enemies after a 2013 corruption probe targeting Erdogan. Gulen, who operates a profitable chain of private schools in the U.S., vehemently denies involvement in the coup.

While Turkey presses on for the extradition of Gulen, U.S. officials say Ankara has offered neither evidence nor a formal extradition request.

Another widely circulated, pro-Erdogan newspaper, Aksam, used its front cover earlier this month to reveal purported details about the coup. It accused Henri Barkey, a respected Lehigh University professor, director of the Woodrow Wilson Center and renowned expert on Turkey, of having gathered a group of 16 people on an island called Buyukada, near Istanbul, on the day of the coup “to hold a top secret meeting.”

“According to intelligence sources,” the article stated, “Fethullah Gulen sympathizer Henri Barkey was going to get immediately involved, support the coup plotters, and run a biased broadcast on the coup.”

Barkey told FoxNews.com the allegations were “ridiculous,” but acknowledged holding the gathering – to discuss the state of Iran. He said the meeting was planned more than six months in advance.

Erdogan is shown speaking after an emergency meeting of the government in Ankara last month. (Associated Press)

“It is ridiculous, of course,” Barkey said. “There’s a conspiracy culture in Turkey that has taken over. I was taken aback, but you are dealing with journalists who are not journalists. They are hacks.

“They just make things up,” he said. “And they describe incredibly detailed conspiracies. It is easy for them to do.”

The claim that Peterson, who is on death row in San Quentin State Prison in California for the 2001 murder of his wife, was at the island gathering and has been assigned by the CIA to carry out assassinations in Turkey, underscores the bizarre nature of the media accusations.

Mensur Akgun, director of Global Political Trends Center in Turkey, who is believed to have attended the meeting, attempted to correct Aksam by announcing on Twitter that the Scott Peterson that was at the meeting was a journalist working for The Christian Science Monitor.

“Your claims are lies from beginning to the end,” he tweeted. “Why is your correspondent not getting in touch with me?”

The anti-U.S. climate has sent a deep wave of unease washing over Americans who have lived and worked in Istanbul and Ankara for years.

“I have not been really worried since the beginning of the coup, but the rising talk of anti-Americanism is starting to get uncomfortable,” said a 34-year-old American freelance journalist who asked not to be identified and has been working in Istanbul for the past four years. “I have been used to the accusations of being a spy and all, but I fear that especially those who blindly support Erdogan are going to look at me as though I myself tried to kill their President. The thought of this actually gives me goosebumps.”

More than 200 people were killed in the July 15 coup attempt, in which members of the military briefly commandeered tanks, aircraft and communications channels. In the aftermath of its failure, Erdogan has led a brutal and widespread crackdown targeting those suspected of supporting Gulen. Some 23,000 people have been detained or arrested and 82,000 have been dismissed or suspended from their jobs.

Barkey, who as an academic, insists he has allegiance to neither Erdogan nor Gulen, dismissed rumors that the coup was staged by Erdogan to flush out his enemies, and did not discount the possibility Gulen played a role.