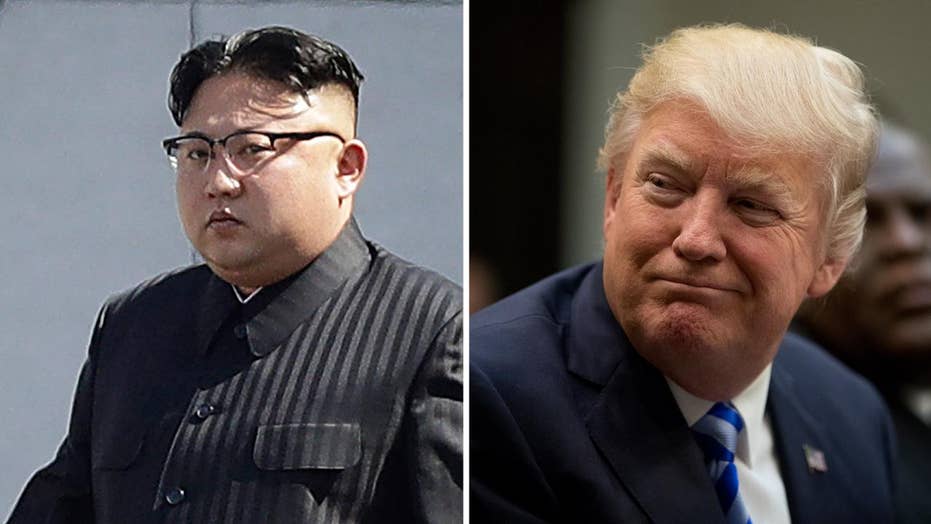 Why tension between the US and N. Korea will only get worse

With Trump and Pence taking a hardline stance on North Korea and its nuke missile testing, prospects for lessening the tension seem dim - and terrifying #Tucker

President Trump isn't spelling out his North Korea strategy, but it sounds like the rogue nation - which just vowed to continue testing missiles on a weekly basis - won't like it.

Speaking exclusively to "Fox & Friends" Tuesday, the commander-in-chief hinted at his own growing frustration with dictator Kim Jong Un, and indicated he won't  appease the tyrant's continued saber rattling.

Asked what would happen if North Korea were to test another missile – as it has vowed to do – Trump cryptically replied: “We’ll find out.”

A senior North Korean official said Monday the Hermit Kingdom has no intention of stopping its missile and bomb tests.

Han reiterated North Korea’s position that it would react with a “nuclear pre-emptive strike by our own style and method” should the U.S. plan a military attack on the country.

Tensions have escalated over North Korean moves to accelerate its weapons development. The North conducted two nuclear tests and 24 ballistic missile tests last year, defying six Security Council sanctions resolutions banning any testing, and it has conducted additional missile tests this year including one this past weekend that failed.

North Korea’s deputy U.N. ambassador Kim In Ryong said during a news conference that the U.S. was turning the Korean Peninsula into “the world’s biggest hotspot” and creating “a dangerous situation in which a thermonuclear war may break out at any moment.”

He said the Trump administration's deployment of the Carl Vinson nuclear carrier task group to waters off the Korean Peninsula again "proves the U.S. reckless moves for invading the DPRK have reached a serious phase of its scenario."

"The prevailing grave situation proves once again that the DPRK was entirely just when it increased in every way its military capabilities for self-defense and pre-emptive attack with a nuclear force as a pivot," he said.

Kim spoke on the a day Vice President Pence kicked off his 10-day Asian tour in South Korea. Pence travelled to the demilitarized zone separating the North and South and warned Pyongyang that after years of testing the U.S. and South Korea with nuclear ambitions, “the era of strategic patients is over.”

Pence, on Tuesday, reassured Japanese Prime Minister Shinzo Abe that the U.S. is ready to work closely with its Asian allies in the region to achieve “a peaceable resolution and the denuclearization of the Korean Peninsula.”

"We appreciate the challenging times in which the people of Japan live with increasing provocations from across the Sea of Japan," Pence said. "We are with you 100 percent.”

At the outset of their meeting, Pence reiterated to Abe his statement in South Korea that the United States has run out of patience with Pyongyang's moves.

"While all options are on the table," Pence said, "President Trump is determined to work closely with Japan, with South Korea, with all our allies in the region, and with China" to resolve the problem.