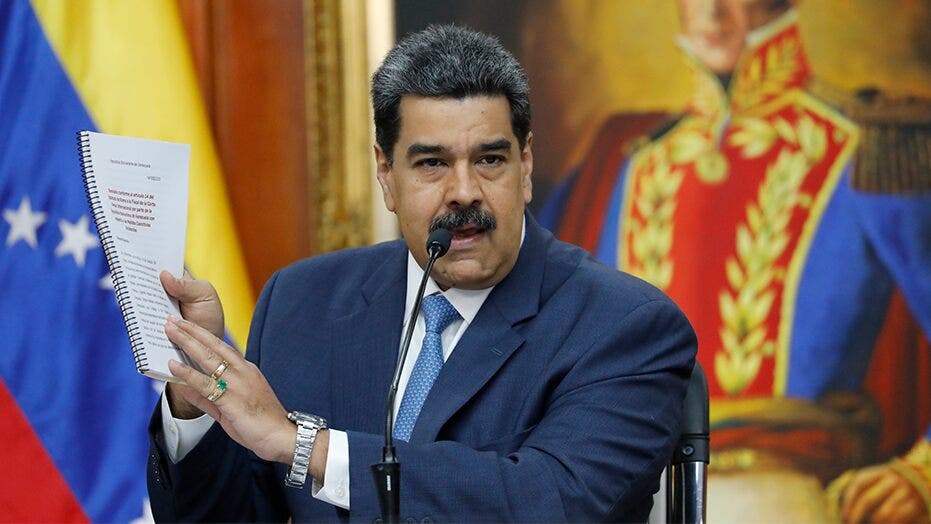 A Trump administration official secretly met with a representative of Venezuelan President Nicolas Maduro last month to negotiate the embattled leader's peaceful exit amid an economic crisis in the oil-rich nation.

Venezuelan President Nicolas Maduro holds up a copy of his country's case taken to the International Criminal Court regarding U.S. sanctions during a press conference at Miraflores presidential palace in Caracas. A Trump administration official reportedly met with a Maduro ally in September in an attempt to negotiate Maduro’s exit from power.

Mike Pompeo, the secretary of state, was not aware of the meeting beforehand, the news outlet said.

The talks weren't successful, people with knowledge of the meeting said, according to Bloomberg. It still isn't clear if Rodriguez and Maduro were open to Maduro leaving office.

Rodriguez, along with spokespeople for the White House National Security Council and the State Department, declined to comment to Bloomberg about the meeting.

Trump's relationship with Maduro has long been fractured. Tensions hit a tipping point earlier this year when a rogue attempt by private contractors, which included several former U.S. Special Forces soldiers, to kidnap Maduro failed. Trump has denied any U.S. involvement in the coup.

Trump did not publicly recognize Maduro as Venezuela's leader. During his State of the Union address in February, Trump honored Venezuelan opposition leader Juan Guaidó, who was in attendance.