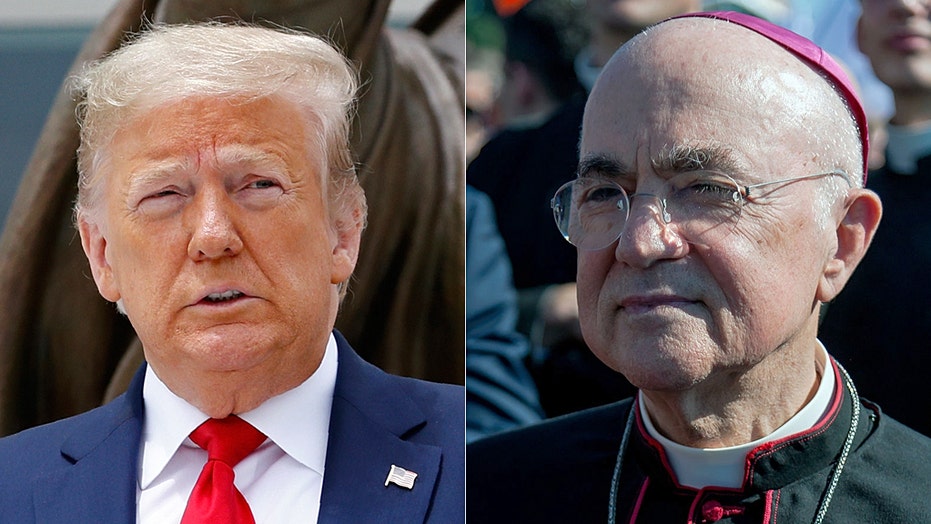 A Catholic archbishop said the "deep state" is "fiercely waging war against" President Trump amid the coronavirus pandemic and riots following the death of George Floyd.

Archbishop Carlo Maria Vigano of Rome urged Trump on Sunday to fight against the so-called "deep state," mainstream media, and the "deep church" in an open letter shared by LifeSiteNews.

"In recent months we have been witnessing the formation of two opposing sides that I would call Biblical: the children of light and the children of darkness," Vigano writes, adding that the deep state has "decided to show their cards, so to speak, by now revealing their plans."

Archbishop Carlo Maria Vigano of Rome, the former Apostolic Nuncio to the United States, threw his support behind President Trump in the "eternal" fight between good and evil in an open letter, Sunday, June 7, 2020. (AP/Getty)

He believes investigations will bring to light mishandling of the COVID-19 crisis as well as what was behind the riots in several cities across the nation after Floyd died while in police custody on Memorial Day.

The former Apostolic Nuncio to the United States slammed Washington, D.C.'s Archbishop Wilton Gregory, who claimed Trump "egregiously misused and manipulated" the Saint John Paul II National Shrine by visiting it last week before signing an international religious liberty order. Trump was criticized for holding up a Bible at St. John's Church after part of it was burned during a protest. Critics claim Trump used tear gas to clear protesters but officials, including Trump, deny it.

Vigano said Gregory and other religious leaders aligned with him "are subservient to the deep state, to globalism, to aligned thought, to the New World Order which they invoke ever more frequently in the name of a universal brotherhood which has nothing Christian about it, but which evokes the Masonic ideals of those want to dominate the world by driving God out of the courts, out of schools, out of families, and perhaps even out of churches."

Gregory has reportedly called on his priests to dress in black and protest Trump at 11 a.m. Monday morning in Lafayette Park.

Vigano said attacks on Trump for visiting the shrine are "part of the orchestrated media narrative which seeks not to fight racism and bring social order, but to aggravate dispositions; not to bring justice, but to legitimize violence and crime; not to serve the truth, but to favor one political faction."

He praised Trump for his actions as president.

"For the first time, the United States has in you a President who courageously defends the right to life, who is not ashamed to denounce the persecution of Christians throughout the world, who speaks of Jesus Christ and the right of citizens to freedom of worship," Vigano wrote, adding, "And I dare to believe that both of us are on the same side in this battle, albeit with different weapons."

Vigano believes Americans "are mature and have now understood how much the mainstream media does not want to spread the truth but seeks to silence and distort it, spreading the lie that is useful for the purposes of their masters."

The majority of good people must wake up, "come together and make their voices heard," he said, adding that the most "effective" way is through prayer.

Vigano offered to pray for Trump and first lady Melania Trump, and the nation as a whole.