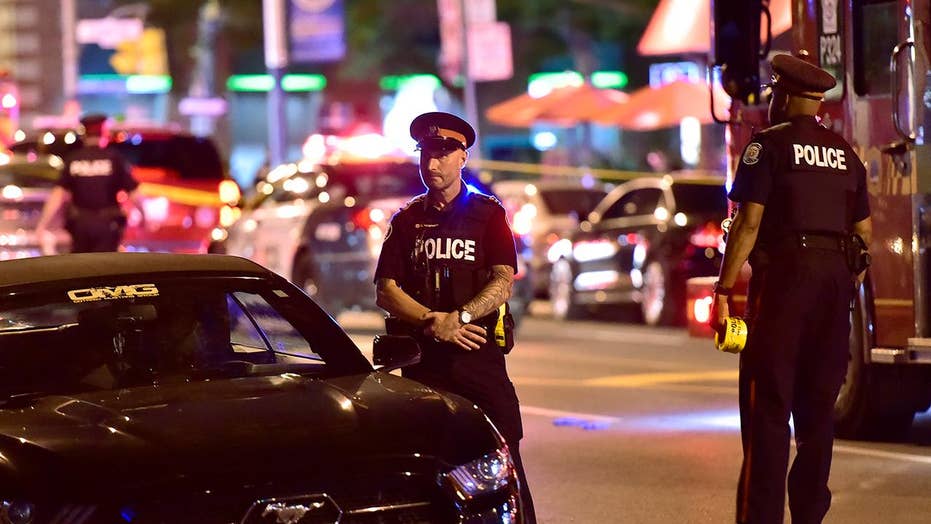 Bryan Llenas reports on the investigation into the motive of the deadly shooting.

Terrorism was not being ruled out as a motive after a gunman fired into packed Toronto restaurants and cafes Sunday, killing two people and injuring 13 others before dying in a gun battle with police, officials said.

Ontario's Special Investigations Unit said in a news release two people were killed by a man who “fired shots at groups of people several times” while walking along Danforth Avenue.

Toronto Police Chief Mark Saunders said cops were investigating "every possible motive, including terrorism." Saunders said the victims were an 18-year-old woman and 10-year-old girl. The 13 other victims ranged in age from 10 to 59-years-old

"I'm looking at every single possible motive for this," the Canadian top cop told reporters. "When you have this many people struck by gunfire, it's a grave concern."

Police were trying Monday to determine what prompted a 29-year-old man to go on a shooting rampage in a popular Toronto neighborhood. (Christopher Katsarov/The Canadian Press via AP)

Saunders said it was not clear if the gunman was killed by police or if he killed himself, but the Toronto Sun reported the suspect killed himself after the gunbattle. The SIU said the suspected gunman, a 29-year-old man, was located by police on Bowden Street and "an exchange of gunfire took place." The man fled the area and was located, deceased, on Danforth Avenue, according to the SIU.

Det. Sgt. Terry Brown of Toronto's homicide unit said during a news conference the shooting was a "very rapid and fluid incident," and there are "several scenes within the scene." He said that some people have "life changing injuries," and authorities are working to get a search warrant for the suspect's home.

SIU spokeswoman Monica Hudon said the agency is still working on identifying the shooter's identity and that authorities have the man's handgun.  Hudon did not disclose any information on a possible motive for the rampage.

Police are photographed investigating a car with a bullet hole within the scene of a mass shooting in Toronto on Monday, July 23, 2018. (Christopher Katsarov/The Canadian Press via AP)

A spokesperson with the Toronto Police told Fox News that officials are not identifying the gunman or other victims as of now. Investigators in the city's forensic, homicide, guns and gangs, and victim services units are on scene in addition to Toronto Police's canine unit, according to police.

Authorities received a call shortly after 10 p.m. about the incident in Toronto's Greektown neighborhood, a lively residential area with crowded Greek restaurants and cafes.

Witnesses reported hearing many shots and described the suspect walking past restaurants and cafes and patios on both sides of the street and firing into them.

Police work the scene of a shooting in Toronto on Sunday, July 22, 2018. (Nathan Denette/The Canadian Press via AP)

John Tulloch told the Canadian Press he and his brother had just gotten out of their car when he heard about 20 to 30 gunshots.

"We just ran. We saw people starting to run, so we just ran," he said.

Police secure a perimeter around the scene of a mass shooting in Toronto. (Christopher Katsarov/The Canadian Press via AP)

A video from one witness shows a man dressed in black clothes and a black hat walking quickly and firing three shots from the sidewalk into at least one shop or restaurant.

The gunman can be seen firing into a restaurant in Toronto's Greektown neighborhood. (Instagram/Arielanise)

Dr. Najma Ahmed, a trauma surgeon with St Michael's Hospital and acting head of the trauma surgical unit, told reporters at a brief news conference on Monday that there were five patients at the hospital, including three who underwent "immediate lifesaving surgery." All five patients are in serious and critical condition, she added.

Another witness to the rampage told CP24 he was standing 10 to 15 feet away from the alleged gunman.

“He looked around 35, long hair, black hat. He had a dark shirt with long sleeves rolled up and black pants,” the man told the television station. “He was skinny, but he had this horrible look in his face, like he was under the influence or something.”

Andrew Mantzios told The Globe and Mail he heard gunshots ring out around 10 p.m. and saw a man dressed in all black walking towards the group of people he was with carrying a handgun.

“He had this horrible expression on his face,” Mantzios said.

Mantzios told the newspaper the gunman then fired at a group of people in the street.

“And then a lady tried to run and she fell down,” he said. “He turned around and shot her point blank, two or three times.”

"It's not gang related. It looks like someone who is very disturbed," Fletcher said.

Witnesses said the alleged gunman was someone who appeared to be "very disturbed." (Nathan Denette/The Canadian Press via AP)

Toronto Mayor John Tory said the city will be "relentless" in finding out what led to the shooting rampage, which he described as a “cowardly act of violence.”

"This is an attack against innocent families and against our entire city," he told the city council on Monday.

"My thoughts are with everyone affected by the terrible tragedy on the Danforth last night in Toronto, and may the injured make a full recovery," he posted to Twitter. "The people of Toronto are strong, resilient and brave - and we’ll be there to support you through this difficult time."

Over the past weekend, Toronto police deployed dozens of additional officers to deal with a recent spike in gun violence in the city. The city's mayor has previously said the city has a gun problem.

The mass shooting comes a few months after the driver of a van plowed into pedestrians on a Toronto sidewalk, killing 10 people and injuring 14. Authorities have not disclosed a motive in that incident. But they have said the suspect, Alek Minassian, posted a message on social media referencing a misogynistic online community before the attack.