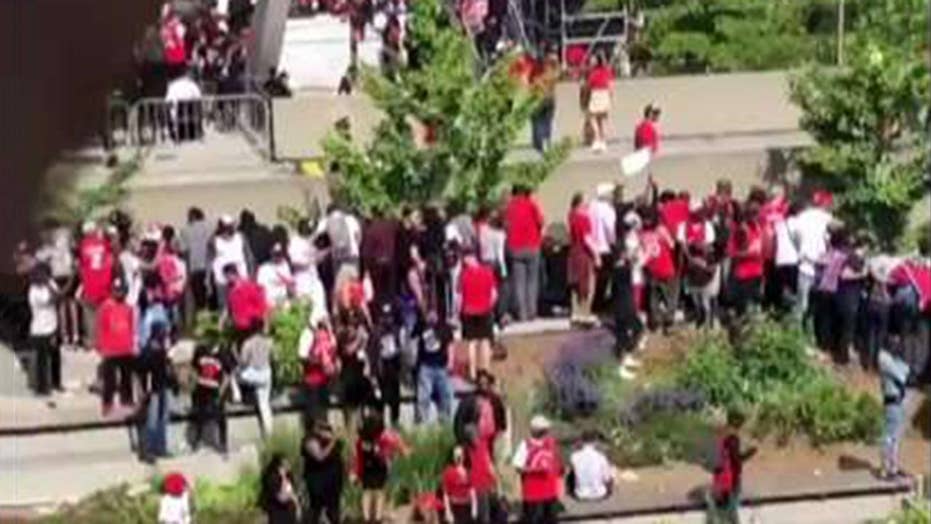 At least four people were injured and three were in custody Monday after police said shots rang out near the Toronto Raptors' victory rally and parade, as videos from the scene showed many in the crowd running.

Raptors fans had packed the streets of downtown Toronto to celebrate the newly crowned NBA champions.

Toronto police tweeted that four victims have been located and that their injuries were not life-threatening. They also said three people were in custody and two firearms were recovered. Investigators are asking anyone with video to contact them to assist in their investigation.

Witnesses showed photos and videos of "chaos" and uncertainty after the shots. Some were seen hiding or ducking behind anything they could find, including cars. The large crowds reportedly forced the delays in the rally, which had been scheduled to end earlier in the afternoon.

“I’m on the roof of city hall and something is happening. People are running including what looks to be cops and security,” Jennifer Pagliaro tweeted.

Francine Kopun tweeted a video of people running and wrote, “Shots fired at Nathan Phillips Square. This is shot at the north side of city hall.”

Andrew Brown-Kerr, 25, was in the crowd when he heard popping sounds, he told The Star. “We tried our best to escape,” Brown-Kerr said. "We saw a lady get trampled, a pregnant woman fall. We saw some kids getting trampled and parents trying to protect them.”

Nathan Phillips Square is City Hall square in Toronto. It is near the main business and shopping malls, as well as University of Toronto.

Catherine Herridge contributed to this report.