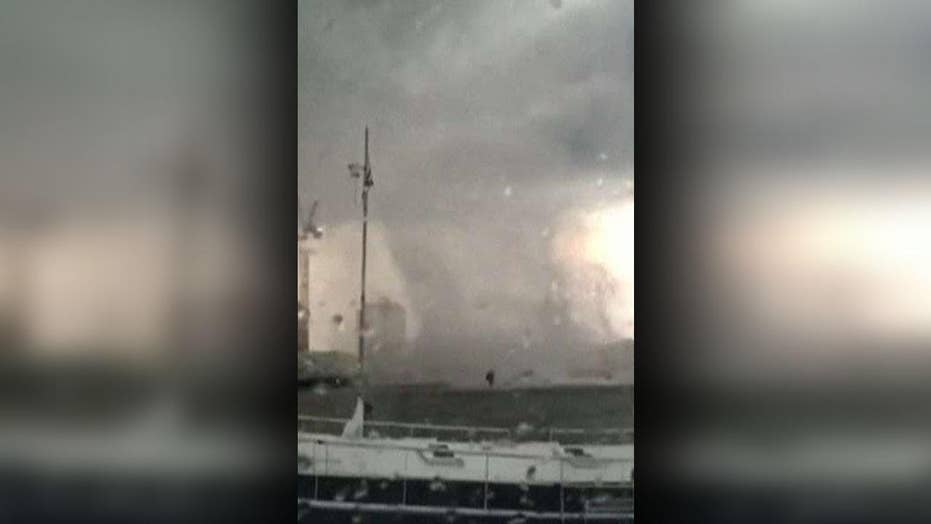 Tornadoes rip through Amsterdam and Luxembourg

Nearly two dozen people were injured after a tornado ripped through the southern part of Luxembourg on Friday while another twister swept through Amsterdam as severe storms rocked northern Europe.

Amateur footage obtained by the Associated Press showed the rare tornado in Amsterdam as it ripped through the Dutch capital on Friday night.

No one was injured, but there were a handful of reports of damage from the unseasonal storms.

TORNADO SAFETY: HOW TO SURVIVE WHEN TWISTERS STRIKE

In Luxembourg, 19 people were injured after a tornado left a path of destruction in the southwestern Luxembourg communities of Pettingen and Kaerjeng.

A tornado hurls objects, including doors and roofs, through the air, as seen from inside a car with a cracked windshield, in Pettingen, Luxembourg, Friday Aug. 9, 2019. (Photo via AP)

The Luxembourg Times reported Saturday that more than 100 homes were now uninhabitable, and one person was in serious condition after suffering a heart attack during the twister. Debris and damaged cars were left strewn around the area, while at least four power poles were destroyed.

The tornado in the southwestern Luxembourg communities on Friday has left a path of destruction that made up to 100 homes uninhabitable, according to local media reports. (Photo via AP)

Photos posted to Twitter showed the extensive damage after the storm moved through.

"Architects are going to come and survey the damage. Meanwhile, we will coordinate to cover the roofs," Paul Schroeder, director general of Luxembourg's fire and rescue service, told residents, according to Luxembourg French-language newspaper L'Essentiel.

The tornado was less destructive in nearby eastern France, but local media reported that dozens of roofs were ruined and cars were damaged in the communities of Longwy and Herserange.

Tornadoes are very unusual in Europe, where fierce gales that are more the norm also created hazardous conditions.

In southern Germany, 15 soccer players were injured by a lightning strike while practicing in Rosenfeld-Heiligenzimmern. The group all sustained minor injuries, and were transported to area hospitals.