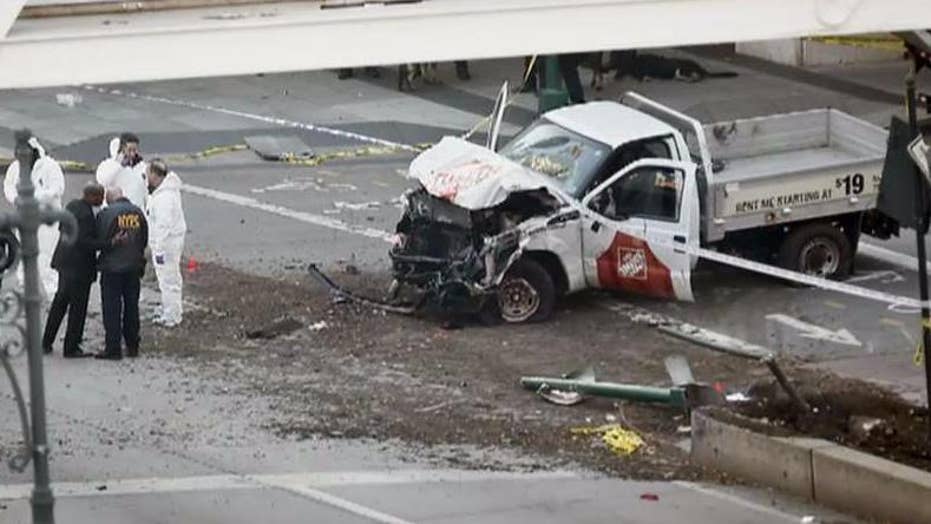 ISIS has told followers to use vehicles and knives in attacks. At least 11 attacks have involved vehicles in the last year. #Tucker

At least eight people have died and 12 people were left injured Tuesday after a suspect crashed a truck into a crowd in New York City.

The driver jumped out of the truck with a fake gun in each hand and was shot by police, authorities said.

“In NYC, looks like another attack by a very sick and deranged person. Law enforcement is following this closely. NOT IN THE U.S.A.!” President Donald Trump tweeted.

The attack was being investigated by the FBI as terrorism — and comes after a string of recent vehicle attacks in Europe.

Below is a timeline of recent vehicle attacks in the United States and Europe.

In the late afternoon on Oct. 31, Sayfullo Saipov, 29, from Uzbekistan, drove a rented truck down a bike path filled with pedestrians and cyclists, leaving at least eight people dead and 12 others injured.

The incident occurred around 3 p.m. near the World Trade Center in lower Manhattan.

Saipov, who moved from Uzbekistan to the United States in 2010, later crashed into a school bus, injured two adults and two children. He then exited the vehicle and yelled “Allahu akbar,” which means “God is great” is Arabic. He also was holding a two weapons which were later determined to be a pellet gun and a paintball gun.

The suspect was taken into custody after an NYPD officer shot him in the abdomen.

New York City officials later confirmed that the attack was carried out in the name of ISIS.

On Aug. 18, an Audi plowed into pedestrians on the promenade in Cambrils, a coastal town south of Barcelona. One person was killed.

An officer fatally shot four attackers as they got out of the vehicle with weapons, the Guardian reported. A fifth attacker stabbed a bystander and was shot by a different officer, according to the paper.

Investigators believe the attackers belonged to the same cell responsible for an attack in Las Ramblas.

A van plowed into a group of people at Las Ramblas promenade in Barcelona, killing at least 13 people and injuring 130 others.

ISIS claimed responsibility, and the driver was killed Aug. 21 after a manhunt.

In August, white nationalists came to Charlottesville to protest the removal of a statue of Robert E. Lee.

A man, who was later identified as 20-year-old James Alex Fields Jr., rammed his car into a group of counter protesters at the rally.

A driver rammed a vehicle into a group of soldiers in the French capital, leaving six of them injured.

A prosecutor later pressed charges against Algerian national Hamou Benlatreche of attempted murder of security forces in connection with a terrorist enterprise.

Prosecutor Francois Molins said investigators found images in Benlatreche’s phone that were connected to ISIS, such as a flag and photos of its leaders.

During Ramadan, a man drove into pedestrians around the Finsbury Park mosque in northern London. One person, a 51-year-old man, was killed, and others were hurt.

Three men drove onto the sidewalk of London Bridge before getting out of a van and stabbing people at Borough Market. Eight people were killed and 48 others were injured.

The attackers were killed by police, and ISIS claimed responsibility for the attack.

One woman was killed and another 22 were injured after a Bronx man plowed into a crowd of pedestrians in Times Square.

The driver, Richard Rojas, was taken into custody following the incident. Rojas was later charged with murder.

New York City Mayor Bill de Blasio said at the time of the incident that there was no indication the crash was related to terrorism.

A hijacked beer truck rammed into a group of shoppers in the Swedish capital. Five victims ultimately died.

The suspect, a 39-year-old man from Uzbekistan named Rakhmat Akilov, was taken into custody. Akilov was reportedly an ISIS sympathizer.

A few days after the attack, Akilov’s lawyer said his client “admits to a terrorist crime,” the Guardian reported.

A man in a rented SUV plowed into pedestrians on Westminster Bridge, killing four people. He later ran onto the grounds of Parliament and fatally stabbed an unarmed police officer.

The suspect was fatally shot by police. ISIS claimed responsibility for the attack.

Twelve people died after a driver used a hijacked truck to plow into a Christmas market in Berlin.

The attacker was killed in Italy several days later by police.

ISIS claimed responsibility, reportedly saying that the attacker “is a soldier of the Islamic State and carried out the attack in response to calls for targeting citizens of the Crusader coalition.”

The driver of a tractor-trailer targeted Bastille Day revelers in the southern French city, killing 86 people. The 31-year-old driver was fatally shot by police.

Fox News’ Jake Gibson and the Associated Press contributed to this report.