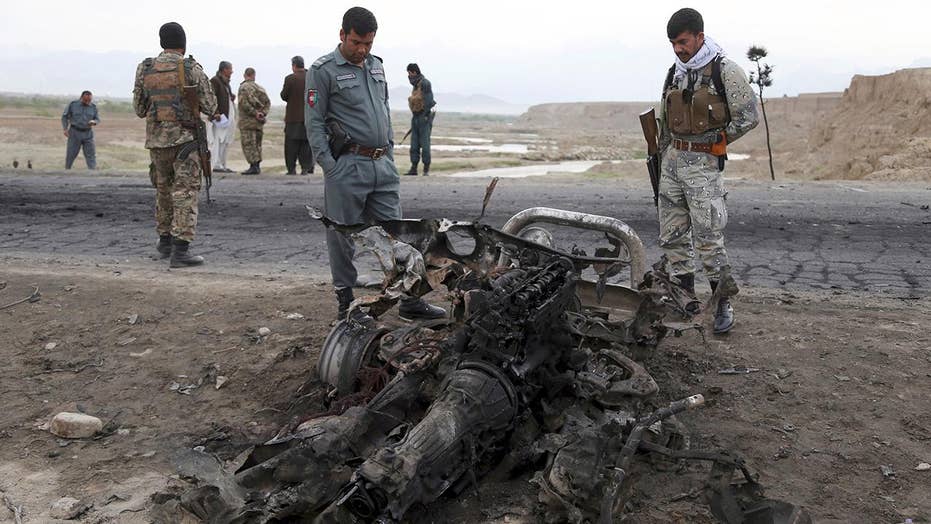 A suicide car bomber rammed his vehicle into a U.S. armored vehicle outside of Bagram Air Base; Lucas Tomlinson has the details.

Three US troops and 1 contractor were killed by an improvised explosive device Monday near Bagram Air Base in Afghanistan, the Pentagon announced. In addition, three U.S. service members were wounded in the blast.

The Taliban claimed responsibility for the attack, adding that a suicide bomber detonated his explosives-laden vehicle near the NATO base in Bagram district, in Parwan province.

The injured were evacuated and were receiving care, the Pentagon said. The names of those killed were being withheld for 24 hours until the notification of next of kin has been completed, as per Defense Department policy.

The Afghanistan government is criticizing the meeting as a power grab as terror attacks continue in the region; Trey Yingst reports.

The deadly blast unfolded as the Trump administration -- including Zalmay Khalilzad, an Afghan-born former U.S. ambassador to Afghanistan and Iraq -- is engaged in peace talks with the Taliban.

Chief Executive Abdullah Abdullah said he supported U.S. efforts to pursue a cease-fire with the Taliban, who effectively control half of Afghanistan and have refused to negotiate with his government. Abdullah Abdullah shares power with President Ashraf Ghani in a U.S.-brokered unity government.

Abdullah spoke to The Associated Press on Sunday at the World Economic Forum in Jordan.

Abdullah said the Taliban could partake in elections and even compete for the presidency if they renounce violence. He said Afghans want peace, but "they don't want to live the way that the Taliban want them to live."

The Taliban have held talks with a U.S. envoy in recent months while continuing to carry out daily attacks on Afghan forces. The insurgents dismiss the Afghan government as a U.S. puppet.

Seven US troops (8 Americans, including the contractor today) have been killed in action this year in Afghanistan. 13 were killed last year. In 2010, 437 American troops were killed in combat there, according to the Pentagon.

Monday marked the first loss of life for U.S. forces in Afghanistan since two U.S. Army soldiers were killed late last month. There are 14,000 U.S. troops currently deployed to the country.