When U.S. Army private Bowe Bergdahl was brought back from captivity in 2014 in a controversial exchange involving the release of five Taliban officials from Guantanamo Bay, it was hard to imagine that those five men would one day be rubbing shoulders with U.S. top brass in a bid to bring peace to blood-swathed Afghanistan.

According to multiple sources connected to the protracted talks, having "the five" in key delegation roles has some scratching heads. One U.S. intelligence source called it "a snub to us all," and a clear power play. But in any case, some experts insist that Bergdahl may have inadvertently become the key player in ushering an end to America's longest war.

Michael Ames, the co-author of a new book “American Cipher: Bowe Bergdahl and the U.S. Tragedy in Afghanistan” with war veteran Matt Farwell, also told Fox News that these five officials "now form the core of the Taliban delegation meeting with U.S. diplomats about the future in Afghanistan," and he pointed out that it was because of the exchange that the dialogue was sparked and renewed.

“They have a seat at the table at the upscale Doha resort hosting the talks," he said.

According to Ames, U.S. officials were first told about the plans for the five men in secret talks held in 2010 in Germany.

“From the start of those talks, the Taliban made the release of its five officials a necessary step to move forward in negotiations,” he claimed. “The most outspoken of the five is Mullah Khairkhwa, who, at the start of the war, was known by U.S. authorities as a friend of [former Afghanistan president] Hamid Karzai's. Khairkhwa was attempting to join Karzai's U.S.-backed regime when he was detained and sent to Guantanamo.” 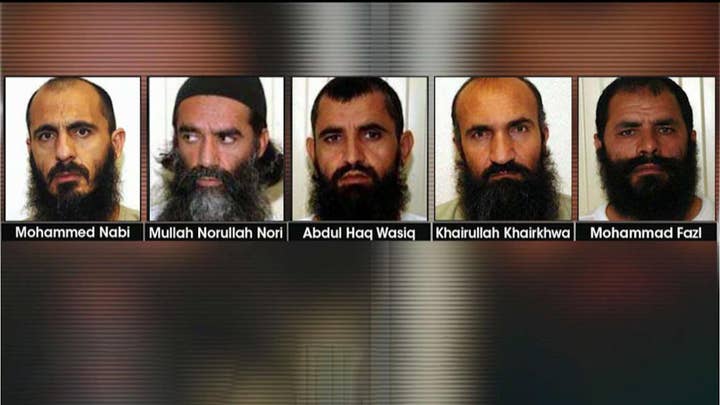 Documents obtained by the New York Times also indicated that those five senior Taliban officials who were held for some 13 years at Guantanamo and exchanged for Bergdahl held prominent positions across from U.S diplomats and generals – led by America’s senior envoy Zalmay Khalilzad – in Doha, Qatar last month.

But as far as the talks themselves go, much of it is kept under lock-and-key.

"Nobody really knows what the real talk is," a former Afghan diplomat said. "But everyone is worried that the Taliban morality won't change if the U.S. accepts them into the government."

However, another high-ranking official in Kabul told Fox News that progress in forming an agreement is slow but not stopped. The source noted that the Taliban and its Gitmo Five have agreed not to use the nation as a launchpad or planning base for foreign attacks, but a central point of contention is that they want no U.S. troops to stay and they want the pullout as soon as possible.

"The talks aren't perfect and the Taliban knows that while they keep attacking they have an advantage," the source continued. "But everyone knows these talks are needed. It's the only way forward."

EX-TALIBAN HOSTAGE ACCUSED OF ACTING LIKE EXTREMIST 'CAPTORS' TOWARDS HIS WIFE, TYING AND FORCING HER TO HAVE SEX

Yet in Ames’s view, Bergdahl – directly or indirectly – may very likely be looked at from the lens of the history books as a fundamental mediator of peace if and when a deal comes to fruition.

Dubbed the “Bergdahl Five,” the men had differing roles in the Taliban government when it controlled much of Afghanistan prior to 9/11, ranging from the minister of intelligence and governor to commander of the Taliban army. They were also documented to have had less-than-stellar Guantanamo behavior records, “including throwing milk at guards and tearing up their mattresses in protest,” the Times reported.

The men have remained in Doha since their 2014 release and remain under surveillance by authorities.

The intense, protracted talks are the closest the U.S. has come to potentially ending the almost 18-year stalemate war. However, they have also heightened tensions between the U.S and the Afghan government given that the Taliban refuses to talk to Kabul’s leadership, deeming them illegitimate, and going over their heads to discuss terms of a troop withdrawal with American officials.

Following a 2017 guilty plea on charges of desertion and misbehavior, Bergdahl was dishonorably discharged from the U.S. military and fined, but received no jail time.

“American Cipher” offers an array of counterclaims to what the authors deem “popular misconceptions” concerning Bergdahl’s desertion from his 2009 post in Afghanistan, which led to him being held for five years by the brutal, Taliban-aligned Haqqani network.

“When Bergdahl came home, he was a historically valuable source of intelligence about terror hideouts in western Pakistan. His memories led to multiple classified reports and drone strikes that took out scores of militants in the summer of 2014,” Ames said.

He also claimed in the book that Bergdahl's father, Bob, made plans to travel to Pakistan and offer himself to the Taliban in exchange for his son and in early 2014, attempted to fly to Afghanistan to raise awareness of his son's plight but was intercepted by U.S. authorities in Dubai.

Ames also asserted that much of the “traitor” narrative and other notions that Bergdahl, now 33, was a Taliban sympathizer or had “joined” the insurgency was perpetuated by the Taliban themselves.

“As for his health,” Ames added. “Bergdahl was in solitary confinement and subject to torture and neglect for five years; the psychological and physical scars will be with him for life.”