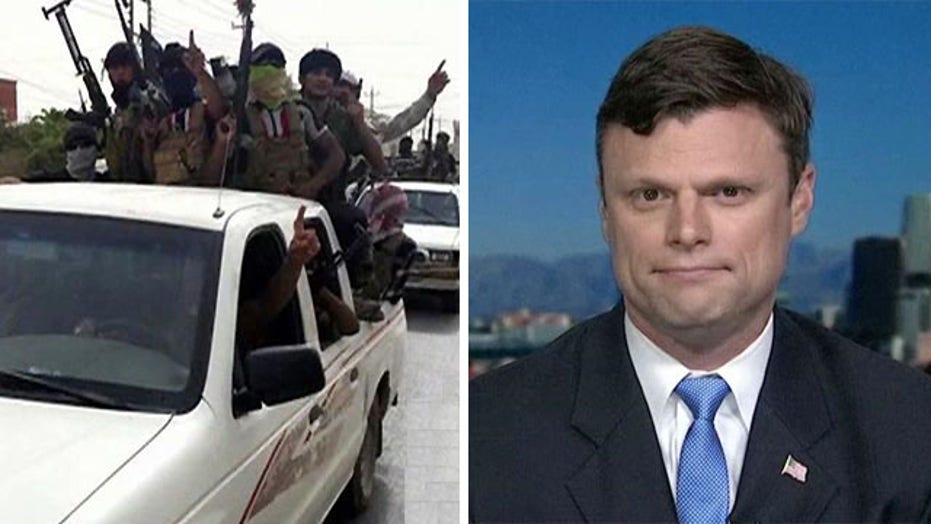 Chaos in Iraq continues to grow

Christian Whiton weighs in on the violence

Thousands of Shiite Muslims across Iraq took up arms Saturday and joined security forces in the fight against Al Qaeda-inspired militants who have invaded and taken over huge chunks of territory north of Baghdad.

The Al Qaeda splinter group, known as the Islamic State of Iraq and the Levant (ISIS), has been on the move, conducting an offensive in the western region of the country and now threaten stability in the nation’s capital.

Their push has caused hundreds of young Iraqi men to pour into volunteer centers across Baghdad, answering a call by the country's top Shiite cleric to join the fight against Sunni militants advancing in the north.

Dozens climbed into the back of army trucks, chanting Shiite slogans and hoisting assault rifles, pledging to battle the ISIS, which has launched a lightning advance across the country.

The massive response to the call by the Iranian-born Grand Ayatollah Ali al-Sistani, issued via his representative Friday, comes as sectarian tensions are threatening to push the country back toward civil war in the worst crisis since U.S. forces withdrew at the end of 2011.

"Given the current threat facing Iraq, defending the land, honor and holy places is a religious duty," Ayatollah Sistani said, according to The Wall Street Journal.

The volunteers were first taken to an assembly center in eastern Baghdad, where they were handed military uniforms, and later went to Taji, home of Iraq's largest military base north of Baghdad, to undergo basic training. State-run television aired footage of the volunteers being drilled, still in their civilian clothes.

The mobilization unfolded against a backdrop of religious and nationalist fervor. State-run television aired a constant flow of nationalist songs, clips of soldiers marching or singing, as well as interviews with troops vowing to crush the militants. Other broadcasts included archival clips of the nation's top Shiite clerics and aerial shots of Shiite shrines.

The development came as the Pentagon said Saturday that the aircraft carrier USS George H.W. Bush will be repositioned to provide President Obama "additional flexibility" in the conflict-torn nation.

Obama said Friday his administration would not send U.S. troops into combat. He made clear that any U.S. involvement likely would be limited, pressing the embattled Iraqi government to develop a "political plan" and make a "sincere effort" to resolve sectarian divisions.

However, Secretary of Defense Chuck Hagel ordered the carrier to be moved Saturday from the North Arabian Sea to the Arabian Gulf. The aircraft carrier will be accompanied by a guided-missile cruiser and a guided-missile destroyer, said Rear Adm. John Kirby, a Pentagon press secretary. The Nimitz-class carrier has been in the region since February.

The ships carry Tomahawk missiles, which could reach Iraq. The Bush is carrying fighter jets that could also easily get to Iraq, where the fast-moving Islamic insurgency is gaining territory.

In Baghdad, fallout from the stunning advance in the north was beginning to affect daily life for the city's 7 million inhabitants.

Some food prices rose dramatically. Army troops went house-to-house searching for militants and weapons in neighborhoods close to vital government installations. The streets of the capital were quieter than usual, and military and police checkpoints made extra efforts to check cars and passenger IDs.

The price hikes were partly the result of transportation disruptions on the main road linking the capital with provinces to the north, but they might also be a telltale sign of a nervous city.

"We were not prepared for this sudden spike in the prices of foodstuff, vegetables and fuel," said Yasser Abbas, a government employee from Baghdad's sprawling eastern Sadr City district.

"I do not know how the poor people in Baghdad will manage their life in the coming days. God be with them until this crisis is over because hunger is as dangerous as bullets."

Prime Minister Nouri al-Maliki, a Shiite widely resented by Sunnis for his perceived sectarian policies, denied the call by Grand Ayatollah al-Sistani was directed against Sunnis, saying it was in fact meant to protect the country and its holy shrines.

"Talk of Sunnis and Shiites must be dropped," he said, calling for the unity of all Iraqis.

Many volunteers, however, said they had enlisted to protect their faith and shrines at risk in the city of Samarra north of Baghdad and elsewhere. The militants have threatened to march all the way south to the holy cities of Najaf and Karbala, home to two of the most revered Shiite shrines.

Fighters from the Al Qaeda splinter group, drawing support from former Saddam Hussein-era figures and other disaffected Sunnis, have made dramatic gains in the Sunni heartland north of Baghdad after overrunning Iraq's second-largest city of Mosul on Tuesday. Soldiers and policemen have melted away in the face of the lightning advance, and thousands have fled to the self-ruling Kurdish region in northern Iraq.

On Saturday, insurgents seized the small town of Adeim in Diyala province after Iraqi security forces pulled out, said the head of the municipal council, Mohammed Dhifan. Adeim is about 60 miles north of Baghdad. There was no official confirmation of the loss of the town.

Jawad al-Bolani, a lawmaker and former Cabinet minister close to Prime Minister Nouri al-Maliki, said a military offensive was underway Saturday to drive the insurgents from Tikrit, Saddam's hometown north of Baghdad, although fighting in the area could not be confirmed.

Major-General Qassim al-Moussawi, spokesman for the Iraqi military's commander in chief, said Iraq's armed forces have "regained the initiative" in the north and northeast, blunting ISIL advances and regaining control of some localities.