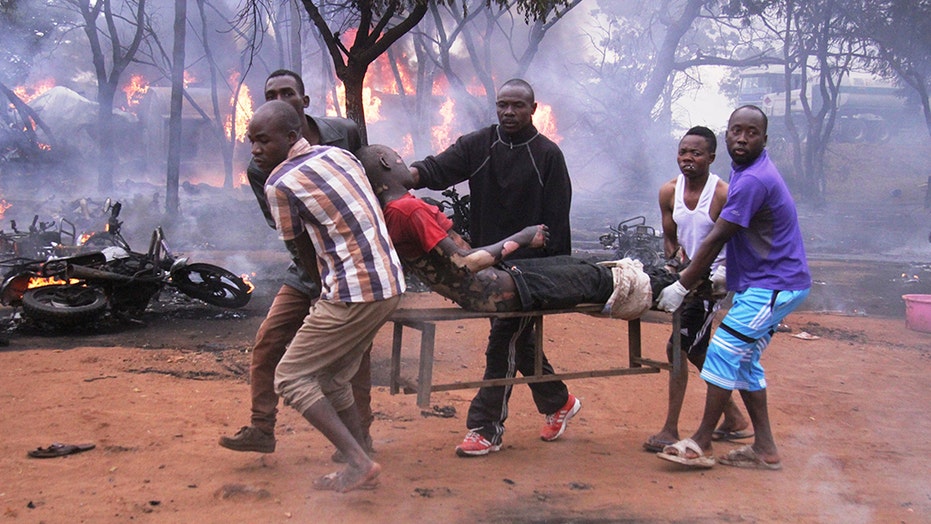 A damaged tanker truck exploded in Tanzania Saturday, with at least 62 people burning to death, making it one of the worst incidents of this kind in the country.

At least 70 people more were injured, many suffering from serious burns, in the incident in the town of Morogoro – about 120 miles west of Dar es Salaam, Tanzania's economic capital – as people were trying to siphon fuel out of the tanker truck.

Tanzanian government spokesman Hassan Abbasi said the news of the deaths was “received with sadness” and sent condolences to the families of the victims.

Witnesses told the Associated Press that a crowd had gathered around the fuel tanker after it was involved in an accident early Saturday. People then rushed to try to siphon fuel, but the tanker burst into flames.

An injured man is carried from the scene as a petrol tanker burns in the background. (AP Photo)

“The fire was huge and it was challenging to rescue victims,” Daniel Ngogo, who saw the explosion, told Reuters. “The situation is really bad. Many people died here -- even those who were not stealing fuel -- because this is a busy place.”

People getting killed in explosions while stealing fuel from incapacitated tankers are fairly frequent in East Africa, though the Saturday explosion is among the deadliest in Tanzania. Those stealing the fuel usually sell it to motorists for cheap.

Destroyed motorbikes and debris litter the scene as the tanker burns in the background. (AP Photo)

In 2013, a similar incident killed at least 29 people on the outskirts of the Ugandan capital, Kampala, as scores swarmed around the scene of an accident.