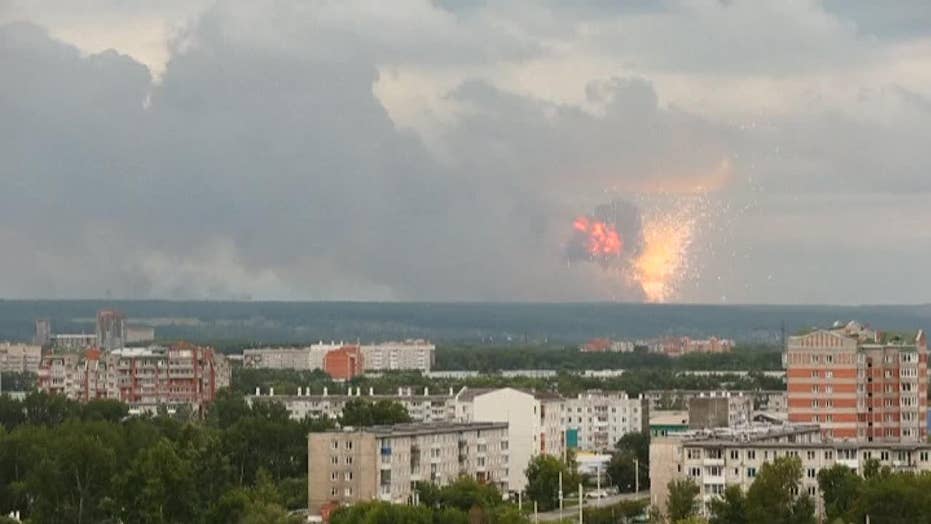 A new explosion at a Russian military ammunition depot in Siberia has been reported, with initial reports suggesting at least five were injured.

The new blast came after the Russian arms depot’s arsenal near the city of Achinsk in eastern Siberia's Krasnoyarsk region was reportedly hit by lightning.

Russia’s Tass news agency reported that there were five victims. Some reports suggested two people have died, but that remains unconfirmed.

Medical officials told the agency that one victim is an elderly woman, while the other four victims – two policemen and two members of the military, are severely injured.

Authorities reportedly also declared an evacuation from a nearby village of Kamyanka due to the adverse weather conditions.

US ENDS ARMS TREATY WITH RUSSIA

The latest incident comes just days after massive explosions were recorded at the same facility, injuring at least eight people and prompting the evacuation of thousands on Monday.

Russia's Defense Ministry said a fire triggered the explosions at a storage facility for gunpowder charges near the city of Achinsk in eastern Siberia's Krasnoyarsk region.

In this photo taken on Monday, Aug. 5, 2019, a family watches explosions at a military ammunition depot near the city of Achinsk in eastern Siberia's Krasnoyarsk region, in Achinsk, Russia. Russian officials say powerful explosions at a military depot in Siberia left 12 people injured and one missing and forced over 16,500 people to leave their homes. (AP Photo/Dmitry Dub)

Video posted online of the explosion reportedly shows the shock wave traveling through low-hanging clouds in the area.

Authorities declared a state of emergency in the region and ordered the evacuation of residents of several districts in Achinsk, as well as towns and villages within 12.4 miles of the depot.

Regional Gov. Alexander Uss said 6,000 people were being evacuated under the order.

Ammunition depot explosions are not unusual in Russia. After the most recent incident in May 2018, a fire raged for almost a week before water drops from military aircraft and helicopters helped put out the blaze.

Another explosion occurred in Russia after a rocket engine exploded during a test Thursday, killing two people and injuring four others, according to Russia’s Defense Ministry. Local officials reported a slight increase in radiation levels in a nearby city.