The Pentagon says they believe the crew of one of the two oil tankers damaged near the Strait of Hormuz has been detained by Iran; Lucas Tomlinson reports.

The crew of the Norwegian-owned tanker Front Altair has been held by the Iranians for nearly 48 hours after they were first rescued by another merchant vessel following attacks on oil tankers in the Gulf of Oman early Thursday, according to U.S. officials.

The detention of the 23 sailors follows attacks on Front Altair and another oil tanker that the U.S. pinned on Iran, calling it an attempt to escalate tensions in the region.

The crew of the Norwegian ship was first rescued by the Hyundai Dubai, according to U.S. officials, but Iranian gunboats quickly surrounded the ship and demanded the crew be turned over. The captain ultimately relented and ordered his crew to surrender.

The 23 crew members are now being held in Iran. It’s not immediately clear what the next steps are.

Pictures and footage from Iran's English-language Press TV showed the crew members, saying they are all in "full health". The 23 crew members, who were apparently in the Iranian southern port town of Bandar-e-Jask, appeared to be watching a speech by Supreme Leader Ayatollah Ali Khamenei.

A picture obtained by AFP from the Iranian news agency Tasnim on June 14, 2019 shows what they say are some of the crew of the oil tankers which were targeted in suspected attacks in the Gulf of Oman, after they were reportedly rescued by the Iranian navy on June 13, 2019 in the Iranian southern port town of Bandar-e-Jask.  (STR/AFP/Getty Images)

"This video refutes false reports by some media outlets claiming that Iran avoided help the sailors working on the vessel," Press TV said, without elaborating. They added that 11 of the crew were Russian, 11 Filipino and one Georgian.

Furthermore, U.S. officials told Fox News that 4 tug boats contracted to pull the Norwegian-owned tanker have been prevented from doing so by Iranian gunboats that have surrounded the stricken tanker.

U.S. officials say all 21 sailors from the Kokuka Courageous, the other tanker that was hit, have been treated and returned to their ship and are preparing to tow the strick vessel back to port after they were rescued by the American guided-missile destroyer Bainbridge.

USS Mason, another guided-missile destroyer, has been dispatched to the scene to ensure the Iranian vessels stay away from all commercial shipping. The incidents took place roughly 20 miles from Iranian shores near the Strait of Hormuz, a strategic waterway where 20 percent of the world's oil flows through each year.

Secretary of State Mike Pompeo forcefully blamed Iran for the attacks on both tankers. 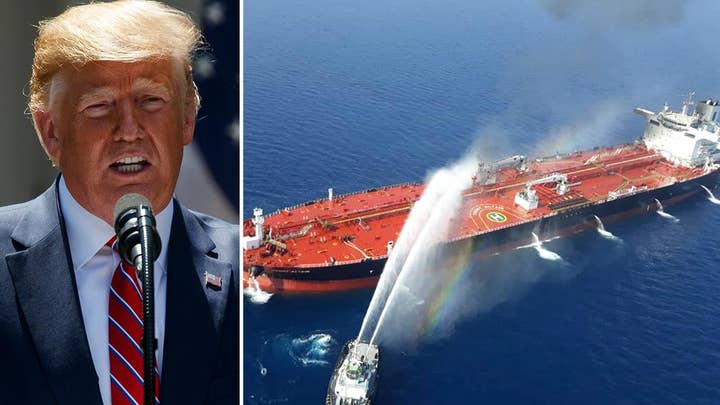 “This assessment is based on intelligence, the weapons used, the level of expertise needed to execute the operation, recent similar Iranian attacks on shipping, and the fact that no proxy group operating in the area has the resources and proficiency to act with such a high degree of sophistication,” Pompeo said at the State Department Thursday afternoon.

Late Thursday night, the U.S. military released video showing what it claims is an Iranian Islamic Revolutionary Guard boat removing an unexploded mine from the hull of the other tanker - a Japanese-owned vessel--damaged in the Gulf of Oman as Japan's Prime Minister visited Tehran.

President Trump followed up Pompeo's accusations by directly pointing the finger at Iran.

In an interview with "Fox & Friends" Friday, he said: "Iran did do it and you know they did it because you saw the boat", adding that the use of the limpet mine had "Iran written all over it".

Iran has denies it played any role in the attacks. The Iranian mission to the United Nations accused the United States and its Gulf allies of warmongering in a statement Thursday evening, Iran “categorically rejects the U.S. unfounded claim with regard to 13 June oil tanker incidents and condemns it in the strongest possible terms"