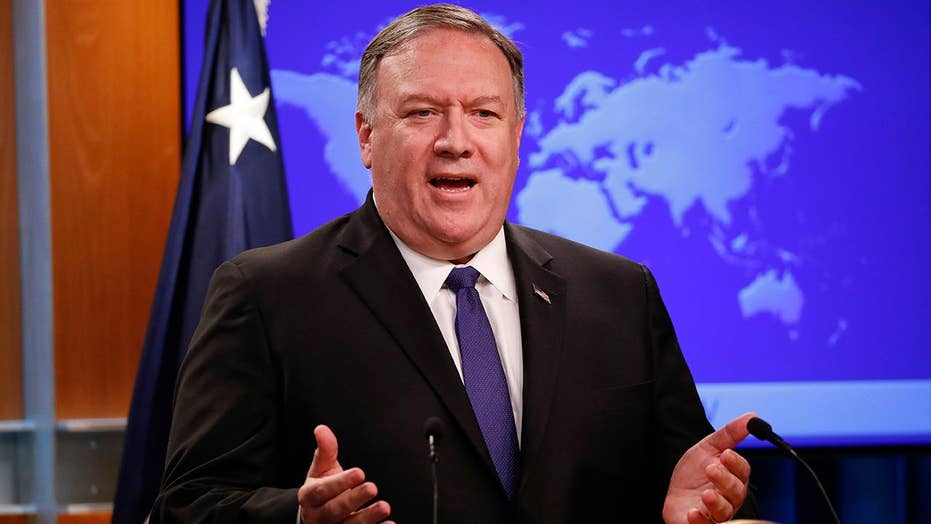 Secretary of State Mike Pompeo cites intelligence on the weapons and resources used and level of expertise required; Rich Edson reports from the White House.

Secretary of State Mike Pompeo was right to call the world’s attention Thursday to Iran’s unprovoked attack on oil tankers in the Gulf of Oman earlier in the day. Pompeo said the U.S. holds Iran responsible for this dangerous aggression – a clear warning to the mullahs who rule the Islamic Republic that the U.S. will ensure they face consequences.

It would be irresponsible for the Trump administration to turn a blind eye to what Pompeo called Iran’s “blatant assault.”

Unfortunately, bad behavior by Iran is nothing new. Iran and its proxies have been attacking targets in the Gulf region for a month now. The U.S. has thus far not retaliated, but that time may soon be upon us. Quite understandably, the patience of the Trump administration is quickly running out.

The latest Iranian targets were an airport in Saudi Arabia where 26 people were wounded, along with the two tankers in the Gulf of Oman.

Speaking to reporters to explain how the U.S. knows Iran is responsible for the attacks, Pompeo said: “This assessment is based on intelligence, the weapons used, the level of expertise needed to execute the operation, recent similar Iranian attacks on shipping, and the fact that no proxy group operating in the area has the resources and proficiency to act with such a high degree of sophistication.”

A senior government official advised me that the identification of Iran as the culprit "was just the first step and there would be more to follow."

Iran’s offensive started soon after the nation’s rulers said they would disrupt the flow of oil flow through the Straits of Hormuz, as four tankers were being attacked while anchored near the United Arab Emirates.

There was little doubt then that Iran was responsible for the attack, but opinions varied as to what U.S. response was warranted. The stakes were raised when Iranian proxies – Houthi rebels in Yemen – hit an oil pipeline with a drone attack a day later.

This first wave of assaults did not trigger a military retaliation from the U.S., based partly on a desire from allies in the region to avoid an escalation.

There is a saying that “rubble don’t make no trouble.” Since the U.S. has made good-faith efforts to deal with Iranian attacks via nonviolent means, it may be a good time to turn some of Iran’s military equipment into smoking wreckage.

But now we have a second wave of Iranian attacks. The U.S. reluctance seems to be nearing an end, because Iran has raised the stakes and has shown no self-control.

It seems that the Iranian regime either feels the U.S. will not take military action, or wants to see how far it can go before provoking an American response.

Either way, the Iranians are asking for trouble.

President Trump has been making a concerted effort to get Iran into negotiations for a new nuclear deal. The maximum pressure sanctions campaign that Trump has ordered on Iran was designed specifically for that purpose and is having a crippling impact on the Iranian economy.

Iran’s leaders would be wise to take President Trump seriously. They won’t be able to take the U.S. to the cleaners as they did when President Barack Obama was in office.

Obama made concession after concession – including ignoring Iran’s regional aggression – in a desperate attempt to get deal delaying Iran’s ability to acquire nuclear weapons. But the deal did nothing to curb Iran’s dangerous military activities, including its support of terrorists, threats to Israel and other bad behavior.

President Trump wisely pulled out of the deeply flawed nuclear deal, which gave Iran far too much in return for far too little.

Obama’s nuclear deal would – at best – have slowed Iran’s nuclear weapons ambitions for a few years, simply kicking the problem of Iranian nukes down the road for another president to deal with.

President Trump doesn’t want to enter the political campaign season with a potential or actual war with Iran underway – but he is too responsible to want to simply hand off problems to his successors.

If the Iranians think Trump will hesitate to do what needs to be done to keep the U.S. and our allies safe and to keep vital oil shipping lanes open, they are making a dangerous miscalculation.

Assuming there is sufficient proof of Iran’s complicity in any of the recent attacks, it is time for the U.S. to show the Iranians they are in danger of being forced to pay a price far higher than economic sanctions for their continued military adventurism.

Some potential ways to send a message the Iranians will understand could include a U.S. cruise missile strike on an Iranian Revolutionary Guard Corps naval base that houses some of the fast attack boats Iran uses to harass and attack foreign ships.

It would also be a good idea for the U.S. to conduct a joint strike with Saudi Arabia on a Houthi rebel base in Yemen. This would serve a dual purpose.

First, a joint strike would back up our warning that we would not differentiate between attacks by Iran and its proxies. Iran is responsible for both. Second, such a strike would support the Saudi and UAE fight against Iranian efforts to cement a foothold in Yemen that menaces much of the world’s oil flow.

At this point, it is more dangerous for America to fail to respond to Iran. Passivity would signal Iran’s rulers that they are not constrained from shutting down the two main sea lanes for shipping Middle East oil.

President Trump would be at a significant disadvantage in any attempt to limit Iranian aggression, let alone start a negotiation, if the Iranians conclude they can act recklessly and suffer no consequences.

There is a saying that “rubble don’t make no trouble.” Since the U.S. has made good-faith efforts to deal with Iranian attacks via nonviolent means, it may be a good time to turn some of Iran’s military equipment into smoking wreckage. This could be the wakeup call Iran needs to hear to curb its dangerous behavior.