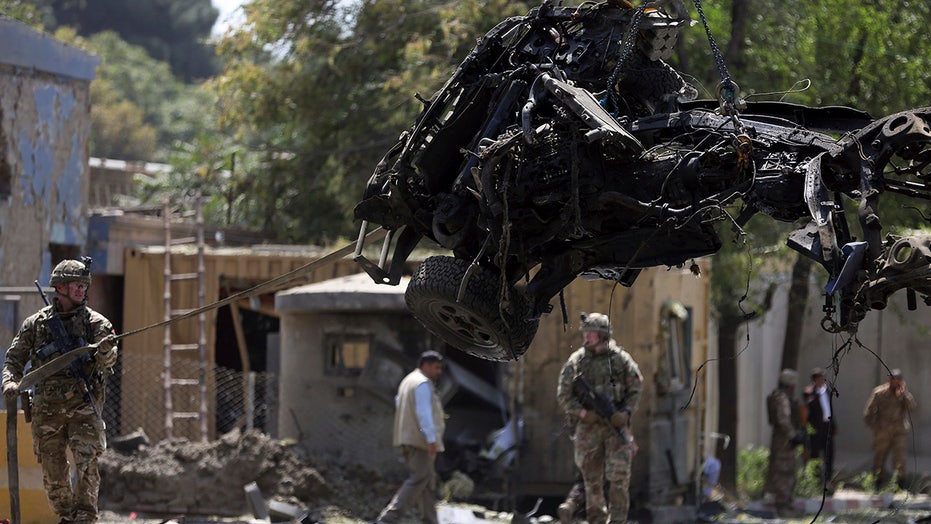 An American service member was among at least a dozen people killed in a Taliban suicide car bomb near the U.S. Embassy in the Afghan capital of Kabul on Thursday.

The U.S. soldier, along with a Romanian soldier and at least 10 Afghan civilians were killed in the attack. Another 42 people wounded in the explosion that rocked the busy diplomatic district.

It was the second such attack this week, seemingly underscoring the government warnings that a preliminary U.S.-Taliban deal on ending America’s longest war is moving dangerously quickly.

Both the U.S. and the Taliban have stepped up attacks on one another amid the U.S.-led peace talks that attempt to end nearly two decades of war, officials say. Thursday’s bombing took place following a ninth round of peace talks Sunday.

"Peace with a group that is still killing innocent people is meaningless," Afghan President Ashraf Ghani said in a statement.

A NATO Resolute Support mission statement said the two service members were "killed in action," without providing details or releasing their names pending notification of their families.

The American soldier was the fourth U.S. service member killed in the past two weeks in Afghanistan.

Interior Ministry spokesman Nasrat Rahimi said 12 vehicles were destroyed in the explosion. Hours later, the Taliban set off a car bomb outside an Afghan military base in a neighboring province, killing four civilians.

The Taliban said that in the Kabul attack, they targeted vehicles of "foreigners" as they tried to enter the heavily guarded Shashdarak area where Afghan national security authorities have offices. The NATO Resolute Support mission is nearby, and British soldiers were at the scene, retrieving what appeared to be the remains of a NATO vehicle. Neither the NATO mission nor the British high commission commented on the attack.

Footage widely shared on social media showed the suicide bomber's vehicle turning into the checkpoint and exploding — and a passer-by trying to sprint away just seconds before. "We all saw on security camera who were targeted!" presidential spokesman Sediq Seddiqi tweeted.

US REACHES DEAL ‘IN PRINCIPLE’ TO PULL 5,400 TROOPS FROM AFGHANISTAN: REPORT

The explosion at the checkpoint, which has been targeted in the past, follows a Taliban attack against a foreign compound late Monday that killed at least 16 people and wounded more than 100, almost all of them local civilians.

U.S. envoy Zalmay Khalilzad has been in Kabul this week briefing the Afghan president and others on the U.S.-Taliban deal to end nearly 18 years of fighting that he says only needs President Donald Trump's approval to become a reality. Khalilzad has not commented publicly on this week's attacks.

Many senior Afghan officials are wary of any so-called deal and say the ramped-up attacks over the past weeks killing dozens of innocent civilians, Afghan and American forces and wounding hundreds are proof the Taliban is not looking to make peace.

In a recent interview with Fox News, Afghanistan’s ambassador to the United States, H.E. Roya Rahmani said, “I am wondering if, on the one hand, you are negotiating peace and on the other hand you continue to kill the party that is sitting across from you on the table. How does that work?”

British soldiers arrive at the site of a car bomb explosion in Kabul, Afghanistan, Thursday, Sept. 5, 2019. A car bomb rocked the Afghan capital on Thursday and smoke rose from a part of eastern Kabul near a neighborhood housing the U.S. Embassy, the NATO Resolute Support mission and other diplomatic missions. (AP Photo/Rahmat Gul)

The American service member killed in Kabul today was the 16th this year, exceeding last year’s total.  At the height of U.S. military involvement in 2010, nearly 500 U.S. troops were killed in Afghanistan.

"The Taliban have been very clear they are not interested in joining the Afghan government,” he told Fox News. “They are interested in overthrowing the government and putting in place an Islamic Emirate of Afghanistan version 2.0."

An injured man is carried into a hospital after a car bomb explosion in Kabul, Afghanistan, Thursday (AP)

The Taliban want all of the approximately 20,000 U.S. and NATO troops out of Afghanistan immediately, while the U.S. seeks a withdrawal in phases that would depend on the Taliban meeting certain conditions, such as a reduction in violence.

The U.S. also seeks Taliban guarantees that they will not allow Afghanistan to become a haven from which extremist groups such as Al Qaeda and the local affiliate of the Islamic State group can launch global attacks.

The deal is meant to be followed quickly by intra-Afghan talks that the U.S. would like to see begin ahead of Afghanistan's presidential election on Sept. 28.