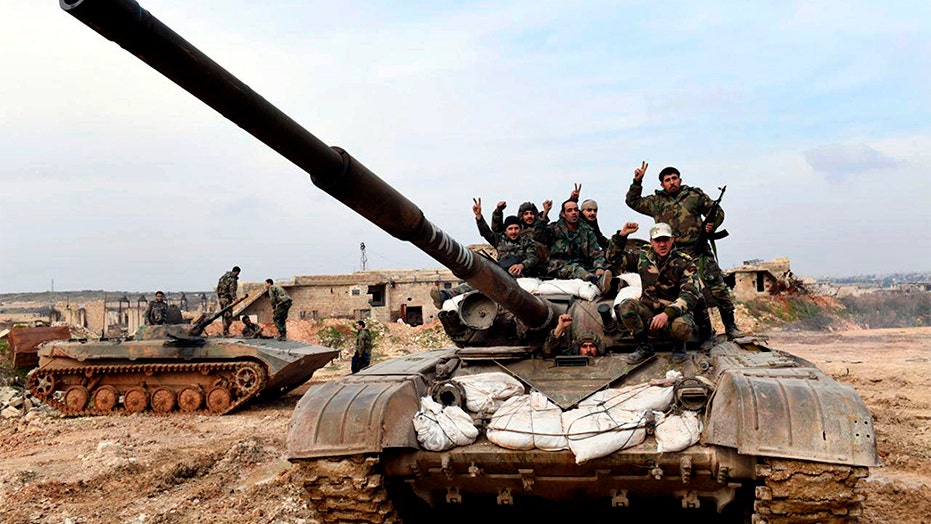 Syrian government forces backed by Russia have finally captured one of the largest and most strategic rebel-held towns following weeks of intense bombardment, military officials and activists announced Wednesday.

The town of Maaret al-Numan in the northwestern Idlib province, which had been in rebel hands since 2012, sits on the highway linking Damascus with Aleppo and is considered critical to President Bashar Assad's forces. Its capture is the latest in a series of military triumphs for Assad, whose forces have retaken control of most of the country from rebel fighters, largely because of blanket air support from Russia, which helped turn the tide in the nearly nine-year civil war.

Syrian government forces have been on the offensive for more than a month in Idlib province, the last rebel stronghold in the country and an area dominated by Al Qaeda-linked militants. The province is home to some 3 million people, many of them internally displaced.

Syrian army soldiers flash the victory sign as they stand on their tank in western rural Aleppo, Syria, on Monday. (AP/SANA)

In recent days, the Syrian government has captured more than a dozen villages there as the insurgents' defenses began to crumble.

The Britain-based Syrian Observatory for Human Rights, an opposition war monitor, said insurgents withdrew from Maaret al-Numan late Tuesday. Syrian troops had left a road west of Maaret al-Numan opened apparently to give a chance for insurgents to pull out and to avoid street battles inside the town.

But the push appears to have angered Turkey, which backs the opposition and has for years coordinated with Russia during the conflict. Turkish President Recep Tayyip Erdogan expressed frustration with Moscow over its failure to halt Syrian government attacks in Idlib.

Erdogan said Russia is not loyal to agreements reached with Turkey over the situation in Idlib, including a cease-fire that collapsed earlier this month. He said he is in contact with the Russians to tell them to stop the bombing “in Idlib or our patience will run out.”

Syrians drive through the city of al-Mastouma, in Idlib province, as they flee a government offensive on Tuesday. (AP)

“Only God knows where our destination will be, where we will find a house. We do not know anything, maybe we will sleep in the car,” one woman who was among those fleeing with her family Tuesday told the Associated Press. She declined to give her name, fearing for her safety.

Farther north, government forces have launched an offensive on the western suburbs of Aleppo in an attempt to push insurgents away from Syria's largest city. Around noon Wednesday, Syrian troops captured a major suburb west of Aleppo, according to state media.

Maaret al-Numan sits on the highway linking Damascus with Aleppo, once Syria's main commercial hub. With the town's fall, government forces are now closer to retaking the critical north-south highway.

Syria's nearly nine-year conflict has left more than 400,000 people dead and displaced half of Syria's population, including more than 5 million who are refugees, mostly in neighboring countries.