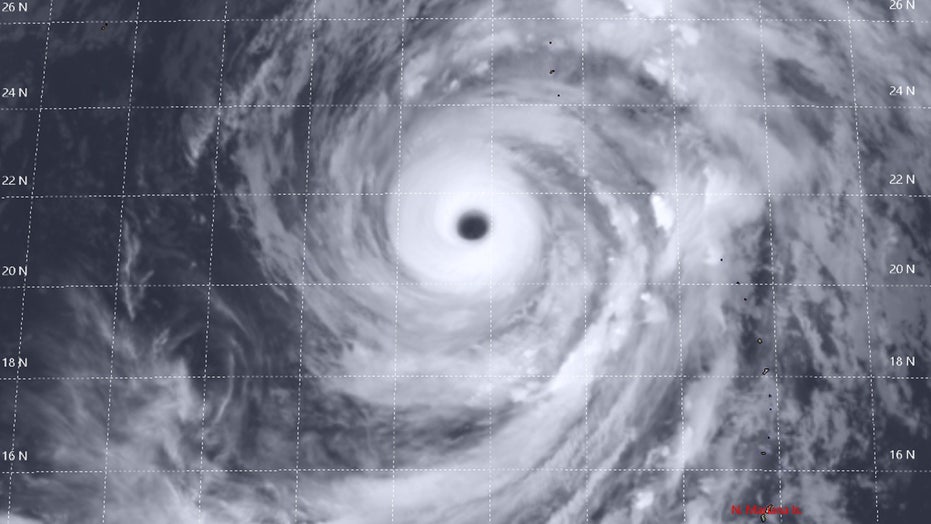 The strongest storm currently on the planet is roaring across the northwestern Pacific Ocean Wednesday as forecasters warn the super typhoon is taking aim at the Tokyo region by this weekend.

The National Weather Service in Guam said that Super Typhoon Hagibis has maximum sustained winds of 160 mph and is located about 665 miles north-northwest of Guam, moving northwest at 7 mph.

"Hagibis is expected to track towards the north-northwest through Saturday morning before turning northeast along the east coast of Japan," the NWS said. "A gradual increase in forward motion is also expected through the weekend."

SUPER TYPHOON HAGIBIS INTENSIFIES AT ONE OF THE FASTEST RATES ON RECORD, MAY IMPACT JAPAN BY WEEKEND

The storm – currently with winds the equivalent of a Category 5 hurricane in the Atlantic – is forecast to maintain its strength through late Wednesday, and weaken as it approaches Japan.

Super Typhoon Hagibis can be seen on Wednesday in this satellite photo. (Joint Typhoon Warning Center))

Hagibis exploded in intensity early Monday morning, ramping up from a tropical storm to a super typhoon with 160 mph in less than a day.

A super typhoon is a term utilized by the Joint Typhoon Warning Center to describe typhoons that reach maximum sustained winds of at least 150 mph, which is equivalent to a strong category 4 or higher on the Saffir-Simpson scale in the Atlantic basin, according to the National Oceanic and Atmospheric Administration.

In Japan, disaster management officials are preparing for the storm's arrival this week as a possibly a Category 1 or 2-equivalent storm.

The storm's large size could bring widespread damage across the country, with heavy rain, strong winds, and storm surge.

"The thing is the storm might skirt along the coast for quite a long time," NHK Meteorologist Tsietsi Monare said Wednesday. "So much of the coastal regions of Japan could be affected. And also the winds stretch so far out they could reach many many places of Japan causing destruction to power lines."

Japan's Meteorological Agency has described the storm as "violent," and East Japan Railway Company has said it may suspend train operations if the forecast doesn't change,  according to the Japan Times.

The storm's potential arrival comes as two high-profile sporting events are set to take place this weekend in Japan. The Rugby World Cup has six scheduled matches on Saturday and Sunday when the worst of the storm is forecast. The Japanese Grand Prix is also scheduled to take place in Suzuka on Sunday afternoon.

Besides sporting events, many in Japan are closely watching the forecast due to many wedding ceremonies that are reportedly planned for Sunday. Japanese broadcaster NHK said that Sunday is considered a "lucky day" on the Japanese calendar, and many have marked it for their special day.

The broadcaster reported that one bride-to-be had already said she was losing sleep over stress from the oncoming storm.