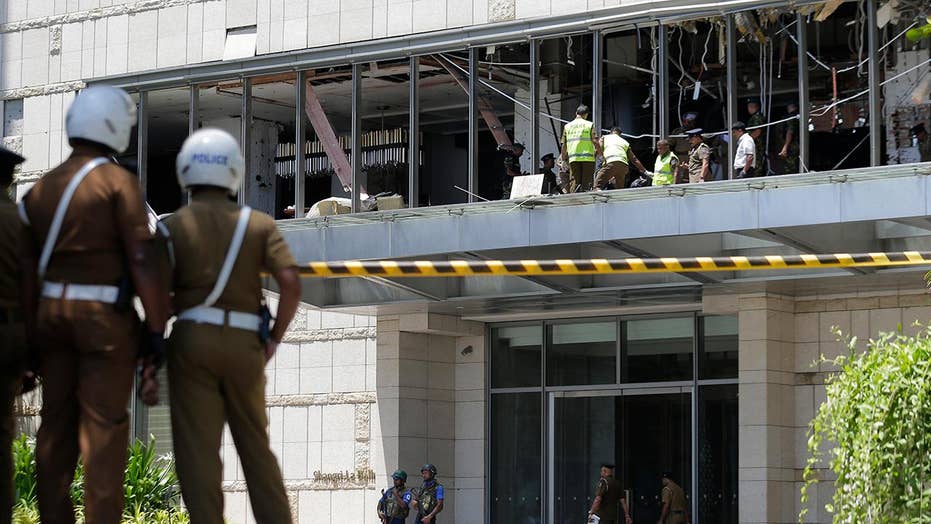 Over the past three years, radical Islamic cleric Zahran Hashim, alternately known as Mohammed Zahran, has amassed an online following of thousands for his hate-filled online sermons – sometimes delivered before a banner depicting the Twin Towers – that are composed of impassioned calls for “all non-Muslims be eliminated.”

But despite reportedly being known to authorities, Hashim’s videos – which have since been removed for violating YouTube terms – were seemingly left unchecked, according to The Telegraph.

Over the past three years, radical Islamic cleric Zahran Hashim, alternately known as Mohammed Zahran, amassed an online following of thousands for hate-filled online sermons – sometimes delivered before a banner depicting the enkindled Twin Towers – and composed of impassioned calls for “all non-Muslims be eliminated.” (YouTube)

Sri Lanka government spokesperson Rajitha Senaratne said Monday that authorities believe a small extremist group known as the National Thowfeek Jamaath (NTJ) – despite having generated little cause for concern with the exception of slashing Buddha statues in 2017 –  were the orchestrators.

Moreover, one of NJT’s leaders Hashim may have had additional terrorist ties.

ISIS – which was officially run out of its self-designated “caliphate” in Syria just weeks ago – also capitalized on the chance to insert itself into the narrative. According to the Middle East Media Research Institute (MEMRI), an ISIS media activist used the encrypted messenger app Telegram this week to publish photographs of three armed Sri Lankan men posing in front of the trademark black ISIS flag, claiming that the men – now all dead – carried out the bombings.

“Pictures of some of the brothers who carried out the attacks in Sri Lanka, may Allah accept them,” the photo caption declared.

One of the featured individuals is believed to be Hashim, who is described as a “well-known preacher who has expressed ISIS sympathies in the past.”

“The ISIS claim of responsibility lends credence to the veracity of the assertion that the men depicted in the photographs were indeed among the perpetrators,” MEMRI stated in its threat report, highlighting that the ISIS media wing Amaq also claimed responsibility. More than 30 members of Sri Lanka's minority Muslim population were documented to have fled abroad to fight with ISIS in Iraq and Syria in recent years, according to officials.

A relative of a blast victim grieves outside a morgue in Colombo, Sri Lanka, Sunday, April 21, 2019. More than hundred were killed and hundreds more hospitalized with injuries from eight blasts that rocked churches and hotels in and just outside of Sri Lanka's capital on Easter Sunday, officials said, the worst violence to hit the South Asian country since its civil war ended a decade ago. (AP Photo/Eranga Jayawardena)

Sri Lankan authorities suspect that there are “international terror groups which are behind the local terrorists,” and are said to be investigating funding sources. Officials also said Tuesday that they believe the onslaught was "in retaliation" to the New Zealand mosque terror attack that claimed the lives of fifty people in Christchurch last month.

Nonetheless, Hashim had developed a reputation as a preacher who "copied" ISIS propaganda videos with his animated and vehement postings who has long espoused vocal support for the world's most dangerous terrorist brand. The pro-ISIS "Al-Ghuraba" media channel in Sri Lanka, which operated across Facebook and YouTube as its primary platforms, reportedly featured his inflammatory videos. The videos often advocated the notion that only Muslims are acceptable rulers and he routinely railed against Christians, Buddhists, and Hindus.

Unconfirmed local reports have since indicated he once studied in neighboring India; but became a controversial figure within the Muslim community and he prompted clashed with other students before dropping out.

Yet what also remains unanswered is why a warning issued by Sri Lanka’s police chief on April 11 –who raised the alarm after receiving information from a foreign intelligence agency, allegedly India, with the caution that NTJ was concocting attacks – was ultimately ignored.