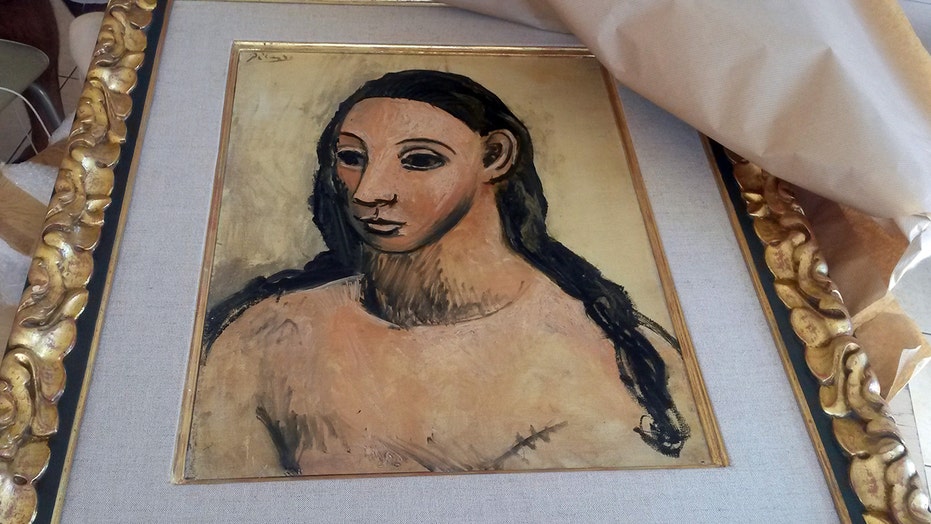 MADRID - When police officers raided the luxury yacht of a billionaire Spanish banker anchored in the Mediterranean Sea in August 2015, they discovered what they were looking for: a masterpiece by Pablo Picasso.

“Head of a Young Woman” was seized from Jaime Botín's schooner after the captain was unable to produce the proper paperwork for the artwork.

The 213-foot boat "Adix" was moored off the island of Corsica, and French police confirmed that the painting it was carrying was banned from leaving Spain without government permission because it was deemed of "cultural interest."

The yacht Adix, owned by the Spanish Santander banking group and flying a British flag, sails off Testa beach on August 4, 2015, in Pianottoli Caldarello, Corsica, four days after French customs seized a Picasso onboard considered a national treasure by Spain. The painting, which French customs said was valued at more than 25 million euros ($27 million), is owned by Jaime Botin, a well-known Spanish banker whose family founded Santander. (PASCAL POCHARD CASABIANCA/AFP via Getty Images)

Five years later, Botín, 83, a member of the Santander banking dynasty, was sentenced last month to 18 months in prison after a Spanish court found him guilty of attempting to smuggle the painting out of Spain.

This week, a court in Madrid doubled his jail term to three years and increased his 53 million euro fine – about $58 million – to 91.7 million euros, or $101 million.

In the rare move, the punishment was made more severe after prosecutors noticed a technical error in the original sentence.

Botín, the uncle of Ana Botín, who is the executive chairwoman for Banco Santander and one of the most powerful women in Spain, denied that he wanted to sell the Picasso abroad.

A handout picture taken on July 31, 2015 and released on Aug. 3, 2015 by the French Customs office, shows the seized painting 'Head of a young woman' by famous Spanish painter Picasso, at the Customs offices in Calvi. (Photo by French Customs Office/Anadolu Agency/Getty Images)

However, the judge ruled Botín broke the law by taking the painting outside Spanish jurisdiction after it was listed as a national heritage item.

Lawyers for Botín are said to be appealing the ruling.

Spanish media reported that the banker had tried to broker a deal with the Spanish government to get a lower sentence on the condition he exhibited the painting in Spain.

Police began monitoring Botín’s activities in 2012 after Christie’s auction house in New York asked for an export license in order to put the Picasso work up for sale. It is valued at more than $28 million.

The Spanish government refused the license and imposed a national protection order on the painting, banning its owner from taking it out of the country.

Spanish Civil Guards push a box containing Picasso's painting "Head of a Young Woman" at the Reina Sofia museum in Madrid after being transferred from the French island of Corsica, on August 11, 2015. (GERARD JULIEN/AFP via Getty Images)

When the painting was discovered aboard Botín's yacht, he denied that he was trying to smuggle it abroad for sale. Instead, he said he was transporting it to Geneva for safe storage.

After the trial, a judge ruled: “Despite being fully aware of the prohibition, the accused took the painting on board his schooner, the Adix moored in Valencia, with the aim of removing it from Spain.”

The judge added: “Anyone with any link to Spain will realize that the work is part of Spanish heritage."

During the trial, Botín's defense argued that the painting was never on Spanish soil, except on rare occasions such as during his daughter's wedding or when he brought it ashore to have it framed.

Botín is said to be worth $1.7 billion because of his holdings in Bankinter, according to Forbes magazine.

Spanish Civil Guards and museum employees push a box containing Picasso's painting "Head of a Young Woman" at the Reina Sofia museum in Madrid after being transferred from the French island of Corsica, on August 11, 2015.  (GERARD JULIEN/AFP via Getty Images)

He is reported to have a floating art collection on the Adix, which includes works by JMW Turner and Camille Corot.

If Botín's appeal is not successful, the octogenarian faces serving time behind bars. He remains free until the hearing.

“Head of a Young Woman” is one of a few existing paintings which Spanish-born artist Picasso painted in 1906 in the village of Gósol in Catalonia, where he spent time with his lover Fernande Olivier.

The painting dates from Picasso's "pink period" and features a woman with long, black hair.

In a statement, Botín said: “The consequence of the sentence is that any ship, yacht or vessel that moors, docks or anchors in Spanish waters and carries on board goods which the Spanish state unilaterally considers integral to its historical heritage, is liable to be seized by Spain, which is simply unacceptable.

“Who is going to buy a work of art in Spain, given the legal uncertainty generated by this sentence?”

Banco Santander is one of the biggest banks in Europe and has interests in Latin America and the U.S.