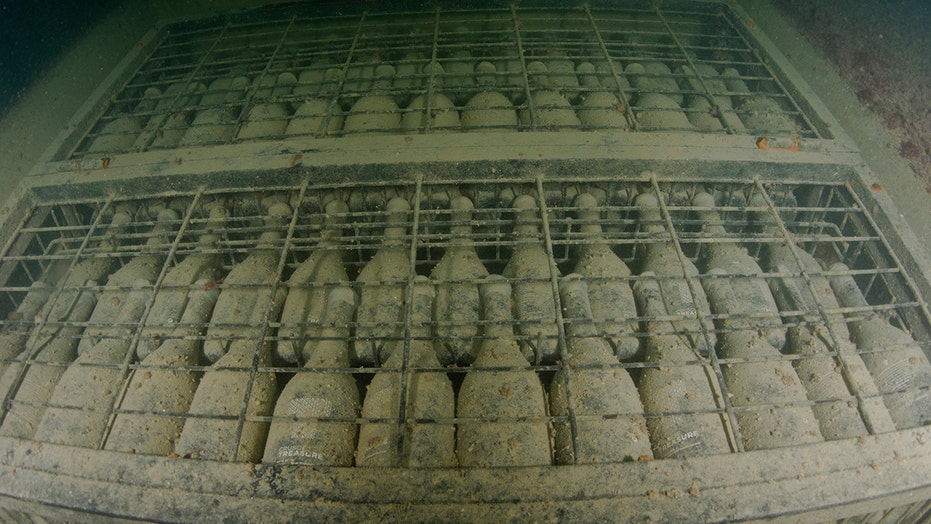 Dressed in a wet suit, Borja Saracho jumps over the side of the Crusoe Treasure to check how thousands of bottles of wine are doing in the murky waters of the Cantabrian Sea off northern Spain.

It is just an average day at the office for the founder of a very unusual Spanish winery.

Bottles of wine age 65 feet beneath the sea in Spain. (Crusoe Treasure)

Crusoe Treasure's wines do not mature in a chilled cellar; instead, they are submerged 65 feet beneath the sea; the bottles spend up to 18 months under the waves with starfish and crabs as company.

“We are a winery which started because we loved the sea and wanted to see if we could produce wine underneath it. It was almost by accident,” Saracho, 46, who did not even like wine before he started the company with associates in 2013, told Fox News.

With the aid of a small crane, sealed crates containing hundreds of bottles of wine are lowered into the sea from the boat in the bay of the pretty town of Plentzia, in the Basque Country of northern Spain.

Crusoe Treasure's wines are submerged 65 feet beneath the sea; the bottles spend up to 18 months under the waves with starfish and crabs for company. (Crusoe Treasure)

Wine tourists from the U.S., Britain, France, and Russia join the crew to sample the experience for themselves.

Last year, the winery's sales were about $551,000, double the figure for 2018. Crusoe Treasure only produces 20,000 bottles per year – a drop in the ocean compared to most winemakers.

Crusoe Treasure whites and reds wines with vestiges of seaweed still attached to the bottle which buyers find part of the charm. (Crusoe Treasure)

The company name was inspired by the famous French underwater explorer, but also by the idea that what they painstakingly produce is a form of treasure.

“I have always been interested in sunken ships and hidden treasures because I came to the sea more when I was younger to improve my asthma,” said Saracho, whose company was the first of its kind in Spain.

Whites and reds are sold with vestiges of seaweed still attached to the bottle -- part of the charm for buyers.

Wine boxes are adorned with drawings of the fish that swim around an artificial reef where the wine matures for six to 18 months.

In the traditional world of Spanish winemaking, the underwater winemakers' idea was initially dismissed as a marketing gimmick.

To prove them wrong, Saracho invited established Spanish winemakers to a blind tasting. They compared wines that had matured underwater to those that remained on land. The sea-aged wines rated higher.

Wine bottles after they have been raised to the surface after aging 18 months under the waves. (Crusoe Treasure)

Maturing the wine under the waves in total darkness, with temperatures between 54 and 65 degrees and aided by the gentle movement of the sea, improves their taste, according to expert oenologists.

The combination of the pressure underwater, the right temperature and the gentle rocking motion is said to be the reason.

However, the costs of making wine this way are high, with bottles selling for between $65 and $109 in Spain.

The company hopes to attract customers who want a bottle for a special occasion or as a special present for a friend or loved one.

“We hope to attract a younger audience, as they are less conservative so look for new experiences,” Saracho said.

​​​​​​​With the aid of a small crane, sealed crates containing hundreds of bottles of wine are lowered into the sea from the boat in the bay of the pretty town of Plentzia, in the Basque Country in northern Spain. (Crusoe Treasure)

Crusoe Treasure has also launched a new form of wine tourism. Instead of gazing at vines then tramping around cellars, visitors take a unique wine-tasting trip out on the boat, watching as divers bring up the cages full of whites or reds.

Last year, 800 people made the journey. Prices for outings range from $167 to $2,218 for a VIP version which includes a wine tasting plus a full meal replete with traditional Basque pintxos, finger foods served with skewers.

“Some are millionaires, others are normal people. All of them love wine and want a different type of wine tourism,” Saracho said. ​​​​​​​