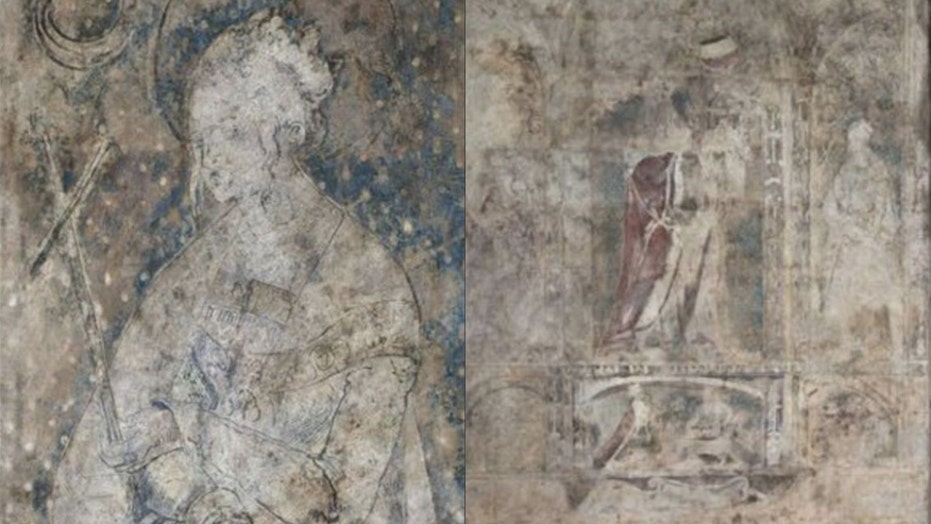 Experts have uncovered a painting beneath centuries of dirt in St. Stephen’s Cathedral in Vienna that may be the work of a famed Renaissance artist.

The large wall painting, which is believed to be the work of Albrecht Dürer, was revealed on a wall above what is now the cathedral’s gift shop, The Art Newspaper reports. The painting is located in a part of the cathedral known as the “bishop’s gate,” according to officials.

The artwork, which depicts Saints Catherine and Margaret, dates to the 16th century, according to Austria’s Federal Monuments Office (BDA). “The special artistic quality suggests a great master,” writes the BDA, in a translated article on its website.

Working with officials from the cathedral, experts from the Federal Monuments Office carefully removed a “centuries-old veil of dirt” from the mural. With the painting revealed, experts were able to analyze the work, concluding that it was created by Dürer.

St. Margaret is depicted in the painting. (BDA/BDA Irene Dworak)

The discovery could shed new light on the life of the German painter. The Art Newspaper reports that there is no record of Dürer visiting the Austrian capital.

Erwin Pokorny, a Dürer specialist, described the painting as the work of the Renaissance master, according to the BDA.

“The question is not whether, but when Dürer was in Vienna,” he said, citing the mural’s “virtuoso brushwork.”

“In Joachim Sandrart's biography of Albrecht Dürer, Emperor Maximilian I orders the artist to 'mark something great on the wall',” art historian Michael Rainer told the BDA. “We could now have found the location of this anecdote, which until now was misunderstood as mere legend.”

The results of the research into the mural will be published by the Federal Monuments Office in the Austrian Journal for Art and Monument Conservation.

Other historic artworks have been revealed in recent years. In 2018, scientists harnessed sophisticated X-ray and imaging technology to reveal a lost painting and other details hidden in a Picasso masterpiece.

The painting, “La Miséreuse accroupie” (The Crouching Woman), is a major work from Picasso’s Blue Period. High-tech analysis of the 1902 painting, however, has revealed how Picasso painted over a landscape by another painter. Buried images linked to other works by Picasso have also been found.

The painting is believed to date back to the early 16th century. (BDA/BDA Irene Dworak)

The painting, which is believed to be the work of Albrecht Dürer, was revealed on a wall above the souvenir shop in St. Stephen’s Cathedral in Vienna. (BDA/BDA Irene Dworak)

In 2017, a secret portrait of Mary, Queen of Scots that had been hidden for centuries beneath another painting was discovered.

A detail from the mural, which is believed to be the work of Albrecht Dürer. (BDA/BDA Irene Dworak)

During 2017 it also emerged that a recently discovered 235-year-old panoramic painting has the only known wartime depiction of George Washington’s Revolutionary War field tent.