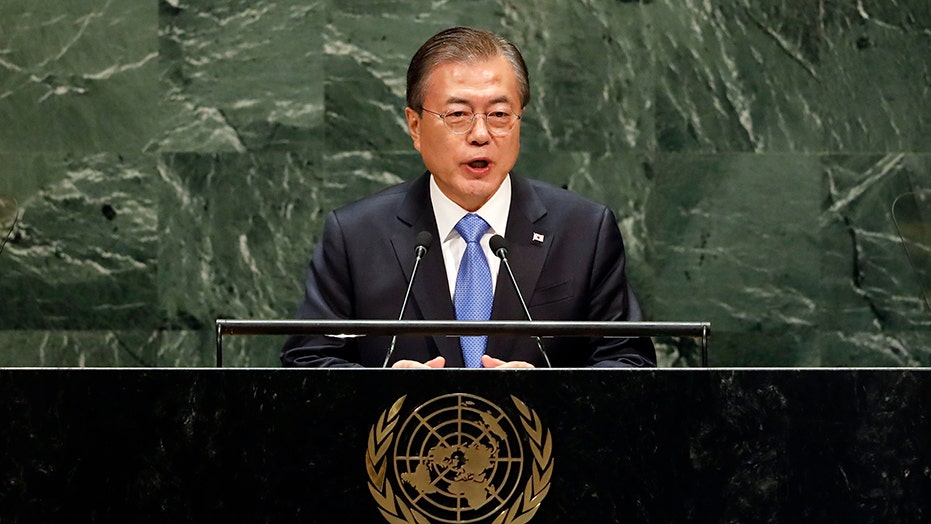 Moon told leaders on Tuesday that his nation “will guarantee the security of North Korea. I hope North Korea will do the same for South Korea.” He called for a peace zone between the two nations' borders to house U.N. offices and other international groups.

Moon’s call for economic relations with the rival nation came one day after President Trump announced that a fourth summit with North Korean leader Kim Jong-Un “could happen soon,” after nuclear talks have remained at an impasse for months. On Sept. 9, North Korea announced via state media that it was open to nuclear talks with the U.S. leader "at an agreed time and place in late September."

North Korea did not send a diplomat to the assembly. Trump met later Monday with the South Korean president, who was a major proponent of the first Trump-Kim summit in 2017.

Nuclear talks have been stalled for months after a February summit in which the U.S. rejected a deal to lift sanctions on the nation for only partial disarmament.

Since the breakdown of talks, however, North Korea has avoided direct criticism of President Trump and demanded that Secretary of State Mike Pompeo be removed from negotiations, accusing him of maintaining a hard-line stance on sanctions.

Trump and Kim met again in June at the demilitarized zone between North and South Korea and agreed to resume talks. But in July, North Korea conducted another missile test. The nation said the test served as a “solemn warning” to “South Korean military warmongers.”

It made no mention of the U.S. in its statement about the test. Moon, after the missile test, said that dialogue between the two neighboring nations remained alive despite "worrying actions taken by North Korea recently." He called on Pyongyang  to choose “economic prosperity over its nuclear program." North Korea mocked the South Korean leader's comments, saying the remarks would make a "boiled head of a cow (fall into) a side-splitting laughter."