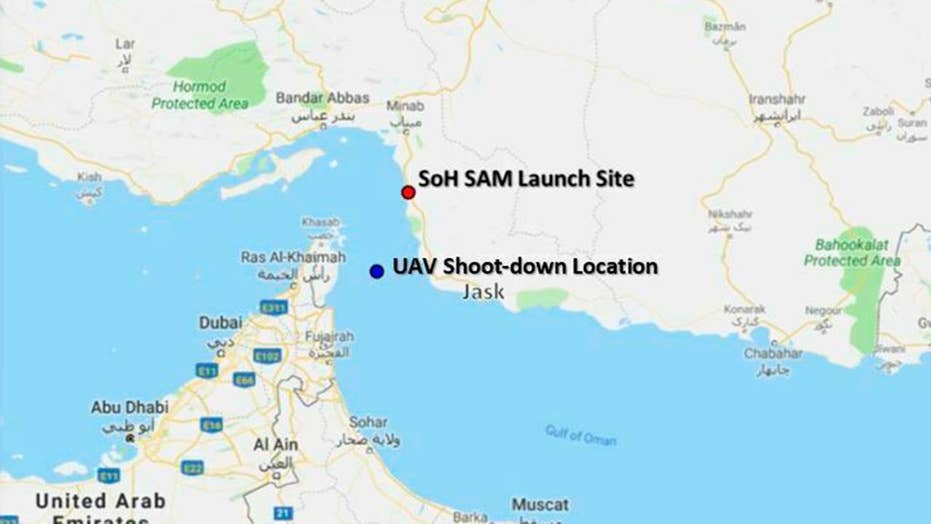 Tensions soar after Iran shoots down US drone

The U.S. Federal Aviation Administration issued an emergency order on Thursday prohibiting U.S. operators from flying in an overwater area of Tehran-controlled airspace over the Persian Gulf and Gulf of Oman “due to heightened military activities and increased political tensions in the region.”

In the order obtained by Fox News, the FAA said the heightened tensions “present an inadvertent risk to U.S. civil aviation operations and potential for miscalculation or mis-identification.”

The decision was made after the U.S. blamed Iran for downing an unmanned drone over international airspace.

U.S. Central Command said in a statement that a U.S. Navy Broad Area Maritime Surveillance ISR aircraft, known as a BAMS-D, was shot down about 7:35 p.m. ET on Wednesday.

"The risk to U.S. civil aviation is demonstrated by the Iranian surface-to-air missile shoot down of a U.S. unmanned aircraft system on 19 June 2019 while it was operating in the vicinity of civil air routes above the Gulf of Oman," the FAA stated in the order.

In a separate advisory to operators, the agency said according to flight tracking applications, the closest civil aircraft was operating within around 51 miles of the drone when it was shot down, Reuters reported.

``There were numerous civil aviation aircraft operating in the area at the time of the intercept,'' the FAA reportedly said.

“Given current events in Iran, United has conducted a thorough safety and security review of our India service through Iranian airspace and decided to suspend our service between New York/Newark and India (Mumbai) beginning this evening,” the airline said in a statement.

Thursday night’s flight scheduled to depart at 8:10 p.m. from Newark did not take off.

“Customers flying onboard UA9239(Mumbai – New York/Newark) will be rebooked on alternative flights back to the U.S.,” the statement said.

“Customers traveling on these flights will experience extended flight times due to a change in our normal flight path.”

The airline said customers were being contacted about the update.

“We continue to explore all our options and remain in close contact with relevant government authorities in order to provide our customers with the most efficient travel experience under these circumstances,” the airline said.

Iran said it "does not seek war" but has the right under the U.N. Charter "to take all appropriate necessary measures against any hostile act violating its territory."

Iran's U.N. ambassador, Majid Takht Ravanchi, wrote in a letter to the U.N. secretary-general and the international body's Security Council that the Islamic Republic targeted a U.S. drone which violated its airspace and "is determined to vigorously defend its land, sea and air."

He said Iran acted under Article 51 of the U.N. Charter, which allows military action in self-defense "if an armed attack occurs."

United Airlines also suspended flights from Newark Airport to New Delhi earlier this year after tensions in the region caused Pakistan to close its airspace. “Seasonal winds” also contributed to the suspension of service, the airline said at the time.