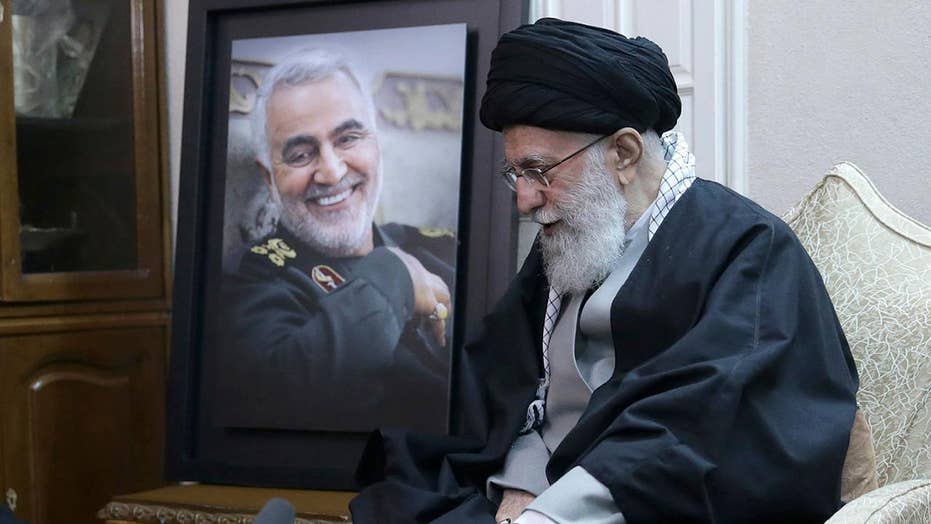 As Iraqis awoke Friday morning to the news that Qassem Soleimani, commander of Iran’s elite Quds Force and the mastermind of its ascending global military influence, had been killed by a targeted U.S. drone strike soon after touching down at the Baghdad International Airport, it didn’t take long for many of the embattled nation’s youth to start circulating photos and messages praising President Trump.

“Happy Friday to Uncle Trump,” one meme read.  “You are a great Commander,” cheered another.

Scores flooded Tahrir Square in Baghdad to dance in jubilation and express their gratitude for the killing.

“I am very happy that America could kill these two criminals,” enthused one activist and former government employee, who feared using his name given the Iran-backed militias have directly targeted him.

Demonstrator Mohammed Mazin, 22, one of thousands who have pushed for Tehran’s dominance in Baghdad to be squashed, agreed.

“I feel happy for this good news," he said. "Soleimani was behind the death of many demonstrators in Iraq. He brought a lot of bad things and sectarianism wars here."

But the celebration was cut short Friday evening by a stabbing attack against demonstrators reportedly carried out by veiled men – an ominous sign for Iraq’s murky future. Indeed, the drone strike has infuriated the Baghdad government – not only blindsiding them but embarrassing them by signifying what little control they have over their sovereignty.

“Things are moving very fast, but the leaders want the U.S. troops out now,” one high-ranking official who was not authorized to speak on the record told Fox News. “The U.S. was only authorized to be in Iraq with the government’s approval for a specific purpose – to fight ISIS. This was a violation of that agreement.”

Iraqi Prime Minister Abdul Mahdi concurred that the strike breached the conditions of U.S. military presence in Iraq and “should be met with legislation that safeguards Iraq’s security and sovereignty.

“This is reckless. We want President Trump to study the consequences for killing Soleimani,” Sameera Abdullah, 33, contended. “We want reckless, irresponsible acts taken away from Iraq.”

The Iran-backed militias that spawned in Iraq, known as the Popular Mobilization Forces (PMF), have been quick to threaten prompt revenge on U.S. personnel and interests. Slaughtered alongside Soleimani at the airport was his close confidante Abu Mahdi al-Mohandas, the deputy head of the PMF.

“[We] will not wait to be targeted in this country or others, we will not wait for the Iraqi government to take retaliation for this killing,” said Hashim Ahmed, a member of the PMF branch known as the Islamic Resistance. “The resistance will respond very soon by attacking U.S. presence by missiles.”

Khakis al Khazali, leader of the PMF outfit Righteous League, underscored that their fighters have been called “to be ready” and warned that the presence of U.S. and Israel elements would be eliminated. Others warned that PMF top-brass were discussing an imminent attack on the U.S embassy in nearby Beirut.

“It won’t be a conventional war like 2003,” one former Iraqi official contended. “They are just going to keep escalating through the occasional proxies and drone strikes. Older U.S. administrations understood the balance Iraq wanted to achieve by having relations with both Iran and the United States. However, [the] Trump administration wants Iraq to pick one side only.”

The U.S embassy in Baghdad immediately urged all American citizens to leave the country, and foreign oil company employees were moved to the southern city of Basra for hasty evacuation.

According to multiple U.S. defense officials and experts, preparations are well underway to shore up American security in the region, including tactical air defenses. The U.S. military has also made clear it will preemptively target Iranian-backed forces if there are any signs of further assaults on U.S. bases and interests.

Pentagon officials announced Friday that they would be sending nearly 3,000 more troops from the 82nd Airborne Division to the region in “a response force to threats throughout the region.” An additional 100 U.S. Marines have also been dispatched from Kuwait.

The uptick in hostilities comes less than a week after the Iranian-backed militia Kata’ib Hezbollah launched a rocket attack in the oil-rich city of Kirkuk, killing an American contractor. Pro-Iran militia members also attempted to swarm the heavily-fortified U.S. embassy this week, ratcheting up pressure on all sides.

“Basically, you have anywhere between 50,000 and 100,000 militiamen with combat training and heavy weapons,” another Middle East weapons tracker, who spoke on the condition of anonymity, said of the PMF militias.

A poster of Qassem Soleimani adorns the entrance of the Iraqi city of Tel Afar in the months after it was liberated from ISIS. (Fox News/Hollie McKay)

The Baghdad government was forced to officially recognize the PMF, despite being largely endorsed and weaponized by Tehran, as a component of their Armed Forces during the operation to defeat ISIS. Iraqis routinely refer to them as “street fighters” who adhere to few rules and regulations on the battleground. While the U.S. refused to work directly with them, PMF units were able to obtain American heavy weapons and equipment. Several militia leaders also told Fox News that PMF fighters joined operations they were prohibited from simply by trading a uniform with an Iraqi soldier or policeman.

While disruption orchestrated by the PMF fighters may be more swift, other analysts on the ground predict Tehran will take its time devising a more calculated response.

“The direct action on Soleimani has taken everyone by surprise, especially the Iranians. Their response directly or by proxy is unlikely to happen soon as they need a new leader to orchestrate it and will pause for thought,” one Western intelligence expert based in the region said. “People are waiting to see how this plays out.”

Moreover, the head of the Iranian National Security Committee, Mojtaba Dhul-Nur, warned that “36 American bases are under our fire” and boasted, “It is easy for us to deal a heavy blow. This crime will not pass easily.”

According to terrorism-monitoring channel Jihadoscope, regime sympathizers have been quick to launch a Twitter campaign entitled “al intiqam al Qassim,” which means “hard revenge,” and functions as a play on words for the slain general.

“Iran will launch its proportionate response through its proxy militias. If it can, Iran will most probably target U.S. military assets in Iraq, Syria or Afghanistan, or attempt assassinations on high-profile U.S. government officials,” cautioned defense expert John Wood. “In the meantime, there will be a ratcheting up of Iranian cyberattacks on any and all U.S. interests that it has found vulnerable, especially those related to the U.S. government.”

Jeff Bardin, the chief intelligence officer at cybersecurity firm Treadstone 71, told Fox News that almost immediately after Soleimani's death, Iranian hackers began infiltrating U.S. city websites, searching for susceptibilities. By Friday afternoon, dozens of U.S. sites were hacked with the same image of the late Soleimani’s face against a black background and the phrase “down with America.”

“The killing of Soleimani is very different from previous U.S. strikes. This wasn’t a terrorist leader. The U.S. just took out a key government official in Iran. That is going to demand a government-level response from Iran,” said Karim Hijazi, the founder and CEO of private cyber and intelligence firm Prevailion. “A cyber-attack is the fastest and most effective way for the Iranian government to respond, while also diminishing the risk of provoking a conventional U.S. military attack.”

Hijazi stressed that Iran’s cyber operations have already infiltrated many of America's critical infrastructure systems, including oil/gas, the electric grid and water supply. The whole idea behind such infiltration is to establish backdoors in these systems and then activate them when needed — such as during a time of war.

“For the Iranians, this attack is likely viewed as just that, so I would expect they will be awakening these dormant infiltrations in order to carry out significant attacks on U.S. assets. They are probably looking at easily accessible water systems, and electric utilities in weather vulnerable regions,” Hijazi continued. “Iran has two dominant threat groups that could carry out these attacks, and they should be feared. They are APT33 and APT34. They have the capability to carry out sophisticated attacks against well-defended systems. Iran also has a lot of experience and technical capability when it comes to attacking ICS (industrial control systems), given their own preeminence in the oil industry.”

Further north in the semi-autonomous Kurdish Regional Government, a sense of exultation was also shared – but with a muted response from the leadership, who still need to maintain diplomatic ties with their often aggressive neighbor.

Inside Iran, the mood has been mixed. Dozens gathered to recite Koranic verses, draped in robes of mourning, inside Soleimani's hometown of Kerman. Others celebrated quietly in the safety of their homes. Morning prayers broadcast on state television featured worshippers bursting into tears and chanting “death to America,” according to footage obtained by the Middle East Research Institute.