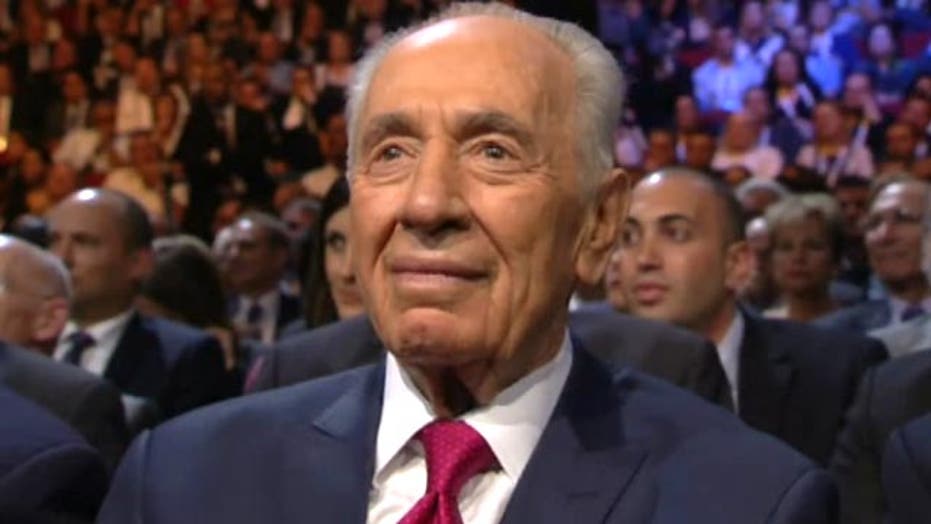 A host of political and entertainment superstars gathered this week in Jerusalem to celebrate the 90th birthday of Israeli President Shimon Peres, whose campaigning for a Mideast peace has won him supporters from around the world.

Among those who appeared at Peres’ celebration -- held to coincide with his annual Presidential Conference -- was former U.S. President Bill Clinton, Israeli Prime Minister Benjamin Netanyahu, former British Prime Minister Tony Blair, singer Barbra Streisand and actor Robert DeNiro. Several leaders from around the world who didn’t attend, including President Barack Obama and Russian President Vladimir Putin, sent video greetings, as did the heads of state from a number of countries.

Peres took the occasion to press his decades-long effort for a more lasting Middle East peace.

“We long for peace with our neighbors," Peres said in an address that was carried live on Israeli television. "The yesterday between us and the Palestinians is full of sadness. I believe that the Israel of tomorrow and the Palestine of tomorrow can offer our children a ray of hope."

Peres did not offer any specific new peace initiatives, perhaps in keeping with his ceremonial position as president.

On Wednesday, Peres presented Clinton with the Presidential Medal of Distinction, citing the former president’s “unwavering commitment to the Jewish people” and “moving support” for the State of Israel. “You offered us what we call in Hebrew tikun olam, which means making the world a better place,” said Peres.

“You transferred the ‘zero sum’ mentality into win-win situations for the people, from Northern Ireland to the Balkans, and from Africa to the Middle East. Where possible -- with an embrace. Where needed -- with strength. And always with charm,” Peres said.

Clinton said he was particularly pleased to receive the award in part “because it comes from Shimon Peres, who is my personal friend and a global treasure.” Clinton went on praise Peres as “the world’s social Einstein" for his efforts to form “a unified theory of meaning."

Clinton also made allusions to the stalled Israeli-Palestinian peace process, saying “the first step in building a new tomorrow is getting rid of the things that divide us.”

In his remarks, Blair pressed for more progress on a two-state Israeli-Palestinian solution.

“Resolution of this conflict remains essential to the security of Israel and to the dignity of Palestinians,” Blair said. “Some people say a two-state solution is now a fantasy. I say the fantasy is in thinking a one-state solution would ever be remotely sustainable or consistent with the values Israel represents. This is urgent and this is now. It is a time for statesmen, and not only politicians.”

The Presidential Conference brings together several thousand participants from around the world each year to discuss a wide variety of topics including politics, economics, technology and culture.