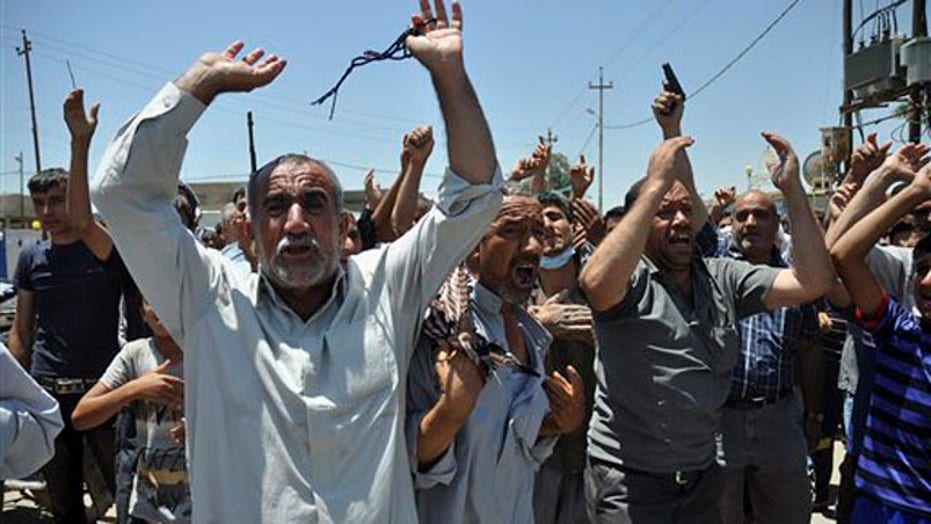 Is the battle to save Iraq already over?

Shiite Turkmen villagers in northern Iraq have claimed that an Al Qaeda-inspired Sunni militant group carried out a "savage massacre" in four villages near the city of Kirkuk.

The Washington Post reported that more than a dozen residents of the villages of Brawchi, Karanaz, Chardaghli and Beshir described atrocities that took place last week. Kirkuk's deputy police chief, General Turhan Abdel-Rahman, said that he knew of at least 40 dead from the four villages, but noted that there were other bodies inside the village of Beshir.

"Tell the world. It was a savage massacre," one man present at the burial of 15 bodies in the village of Tafaz told the Post.

Many survivors of the attacks have fled to Kirkuk, where Iraqi Kurdish security forces are in control.

The United Nations said Tuesday that more than 1,000 people, mostly civilians, have been killed so far in June violence in Iraq, according to Reuters.

"This figure — which should be viewed very much as a minimum — includes a number of verified summary executions and extra-judicial killings of civilians, police, and soldiers who were hors (de) combat," said U.N. human rights office spokesman Rupert Colville, using the French term for soldiers who have signaled they are no longer combatants.

Witnesses said the attacks on the villages by the Islamic State in Iraq and Syria (ISIS) began with shelling before militants fired on fleeing villagers. The Associated Press reported that some residents who attempted to flee were shot at by rooftop snipers. One father of five told the Post that he and his family had survived the June 17 attack on Brawchi by pretending to be dead when the militants reached them. The man and two of his children were wounded.

"You cannot imagine what happened, only if you saw it could you believe it," Hassan Ali, a 52-year-old farmer told the Associated Press. "They hit us with mortars and mortars, and the families fled, and they kept hitting us. It was completely sectarian. The Shiites, out."

Survivors said the militants traveled in Humvees and trucks mounted with machine guns and waving the black flag of ISIS. It is believed that the militants have seized the vehicles, guns and other equipment from the Iraqi positions that they have overrun over the past two weeks.

The Shiite Turkmen are part of an ethnic minority making up approximately three percent of Iraq's population. They speak their own language, a derivative of Turkish.

Days prior to the alleged attacks on the four villages, the Associated Press reported that Shiite homes were burned down in the border town of Tal Afar.

On Monday, the ISIS militants continued to sow terror close to Baghdad as the Wall Street Journal reported that a police convoy near Hilla, just 20 miles south of the capital, was attacked. The shootout that followed killed 81 people, of whom 71 were prisoners held by police. Of the others, five were insurgents, and five were police.

Elsewhere, an Iraqi official told the Journal that rebels had controlled most of the military airport in Tal Afar. The Journal also reported that the Iraqi Army commander in charge of Tal Afar, Maj. Gen. Mohammed al-Quraishi, fled the ISIS offensive to the semiautonomous region of Kurdistan. That report was denied by an Iraq government spokesman.

In the northern province of Tikrit, the Sunni village of Al Alam, fell to ISIS insurgents, who received government-issued vehicles and weapons from the surrendered inhabitants.

"The truce came after the army abandoned us," a resident of the town told the Journal. "We were surrounded."