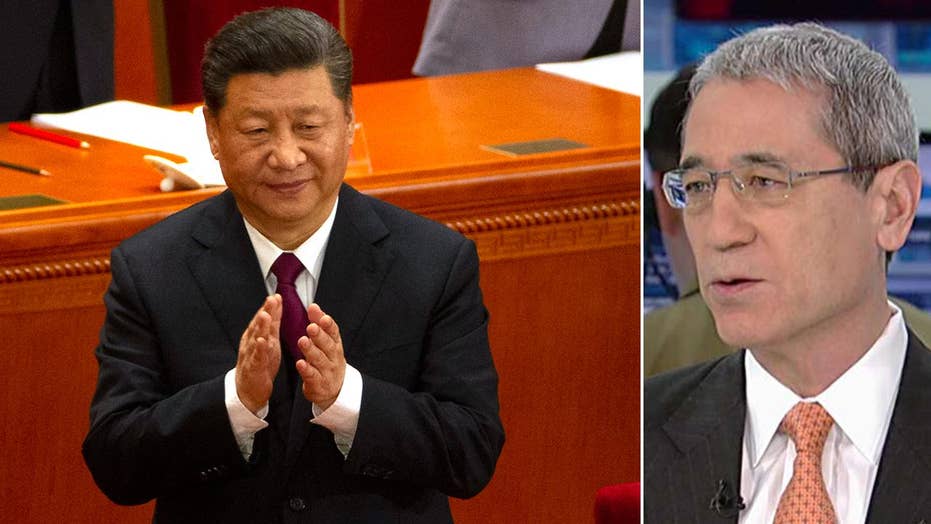 China is the world's second largest military spender after the U.S.; reaction and analysis from Gordon Chang, foreign affairs journalist and the author of 'Nuclear Showdown: North Korea Takes On the World.'

The Center for Strategic and International Studies (CSIS) in Washington released images from April that reveal construction on China’s third aircraft carrier in the Jiangnan Shipyard in Shanghai over the past six months, Reuters reported.

US WARSHIPS SAIL NEAR DISPUTED ISLANDS CLAIMED BY CHINA, AS TENSIONS ESCALATE: REPORT

China has not confirmed it is building a third carrier. But the Pentagon said last week that work had begun on a vessel that would “probably be larger than the first two and fitted with a catapult launch system to accelerate aircraft during takeoff.”

The CSIS images support the Pentagon’s claims. The satellite photographs show China’s Type 002 aircraft carrier is slightly smaller than U.S. carriers but larger than France’s Charles de Gaulle, analysts said. It remains unclear whether the vessel would have nuclear capability.

Changing political relationships have motivated the Chinese government to accelerate the modernization of its armed forces over the past few years, the CSIS reports. Both Asian and Western militaries are seeking information regarding the purpose of China’s newest aircraft carrier.

Meanwhile, some analysts view its construction as a way for China to slowly undermine U.S. strategic superiority in the region, according to a series of Reuters Special Reports.

Singapore-based regional security analyst Ian Storey told Reuters that China’s Type 002 might put added stress on the relationship between the U.S. and China as other nations in the region become threatened by China’s growing military presence.

“Once completed, it will outclass any warship from any Asian country, including India and Japan,” said Storey, of the ISEAS Yusof Ishak Institute. “It is yet another indication that China has emerged as Asia’s paramount naval power.”