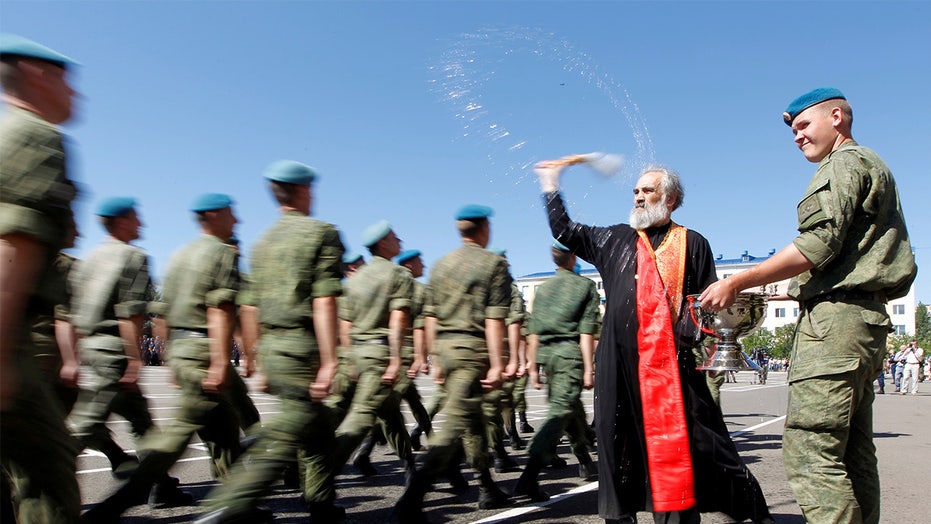 The Russian Orthodox Church thinks its priests should discontinue the practice of blessing weapons of mass destruction that inflict death upon thousands of people, according to a proposal published Monday.

The church released a draft document outlining its stance on the blessing of Orthodox Christians "for the performance of military duty" and "defense of the Fatherland."

Russian priests have longed sprinkled holy water on various weapon systems, including submarines, ballistic missiles and space rockets, among others.

An Orthodox priest blesses Russian paratroopers marching during 2017 Paratroopers' Day celebrations, the annual holiday of Russian Airborne Troops, at their military unit in the southern city of Stavropol, Russia. (REUTERS/Eduard Korniyenko TPX IMAGES OF THE DAY)

"It is not reflected in the tradition of the Orthodox Church and does not correspond to the content of the Rite of blessing of military weapons, and therefore, the use of this order to “sanctify” any kind of weapon, the use of which could lead to the death of an undetermined number of people, including weapons, should be excluded from pastoral practice indiscriminate action and weapons of mass destruction," the church wrote.

The proposal noted the blessing of military vehicles used on land, air and sea is not  the “blessing of guns, rockets or bombing devices that the Lord is asking for, but the protection of soldiers."

The proposals will be discussed on June 1 and the public is being asked to weigh in the debate, Reuters reported.

The request comes as the church and the Russian military continue to forge close ties. The armed forces are building a sprawling cathedral at a military park outside Moscow.