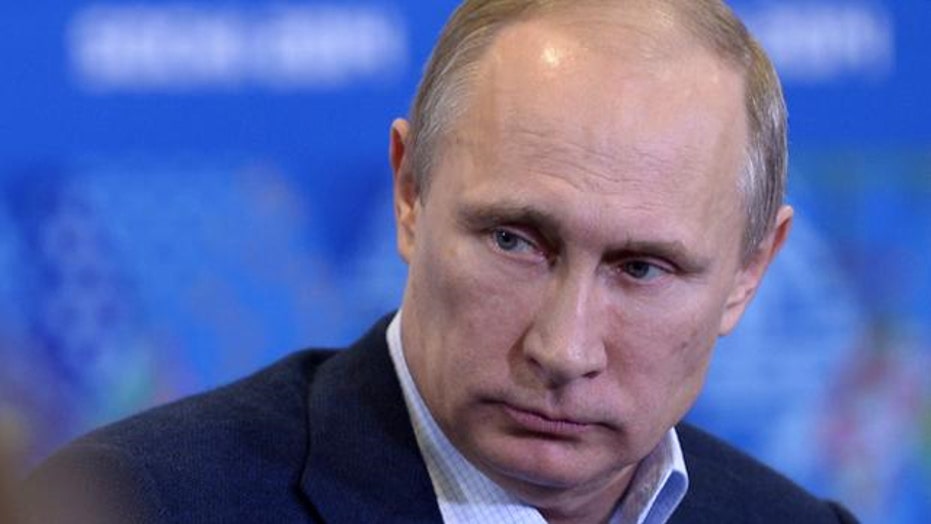 Putin claims his actions are 'consistent with international law’

Armed men believed to be Russian seized a Ukrainian military base in Crimea Friday, triggering a standoff but no gunfire in the latest incident of escalating tension in the flashpoint peninsula.

The move followed reports earlier in the day that Russia had begun large-scale air defense drills.

Witnesses say Russian troops broke through the gate of a missile defense base with a military vehicle, trying to break into a command post, but no shots were fired, Interfax Ukraine reported.

Initial Reuters reports said the truck had pushed through the gates of a post in the city of Sevastopol, but there were no signs of damage. There was conflicting information about the circumstances of the raid.

A Ukrainian military official, Vladislav Seleznyov, told Reuters the armed men took over the base without any shooting and no one appeared hurt. Another Ukrainian official told Reuters at the post that he was now mediating between Ukrainian forces and the armed group inside.

He said Saturday they turned off power and cut telephone lines and urged Ukrainian troops surrender their weapons and swear allegiance to Russia. The invaders left around midnight.

About 100 Ukrainian troops are stationed at the base in Sevastopol, Interfax reported, citing a duty officer and Ukraine's defense ministry. About 20 "attackers" threw stun grenades, the report said.

The Ukrainians barricaded themselves inside one of their barracks, and their commander began negotiations, Interfax said.

Crimea's pro-Russia premier, Sergei Aksyonov, said all was calm when he was asked
about the incident during a live political chat show on Ukranian television, Reuters said.

He described the armed men as "self-defense units" and said they were surrounded by journalists and "there are no attempts to attack."

Earlier Friday, there were reports Russia had begun large-scale air defense drills as tensions remained high over the fate of Crimea.

Roughly 3,500 troops and more than 1,000 units of military hardware will be hosted for about a month in Kapustin Yar, some 280 miles east of the Ukrainian border. The exercise by Russia’s Western Military District, according to a report from RIA Novosti, will culminate with live-firing drills and deployment of air defense systems.

“It is for the first time that all air defense units from the district, including coastal defenses of the Northern Fleet, have gathered in one place,” district spokesman Col. Oleg Kochetkov said, adding that the drills were part of regular training cycles. “It is the largest-ever exercise held by air defense units of the Western Military District.”

Pentagon officials on Friday confirmed the report to Fox News based on the latest intelligence available to U.S. officials. An estimated 20,000 Russian troops are now in Crimea, including roughly 15,000 that were stationed at its naval base in Sevastapol, Ukraine. A senior U.S. official told Fox News that no additional U.S. military commitments are expected as of Friday, adding that it's not in "national interest" to go war over Ukraine.

President Vladimir Putin told reporters on Tuesday that Russia had no intention of annexing Crimea, while insisting that residents had the right to determine the region's status — and thus possible independence — by popular vote. The referendum, however, will give Crimea residents only two options: to join Russia or to stay with Ukraine.

"If the decision is made (by referendum), then (Crimea) will become an absolutely equal subject of the Russian Federation," said Matvienko. She emphasized the grievances of Russian-speaking residents in eastern and southern regions of Ukraine, which have been the Russian government's primary justification for possible intervention in its neighbor.

Matvienko said the government welcomed the expedited referendum date, which was originally slated to coincide with nationwide elections on May 25. She dismissed that vote, saying there are "no conditions for honest, equal, transparent and open elections" in the country.

Friday’s Russian military exercise comes as the speaker of its upper house of parliament said that Crimea — an autonomous Ukrainian region with a majority ethnic Russian population — would become an equal part of Russia if the region votes to leave Ukraine in an upcoming referendum.

Valentina Matvienko met with the head of the Crimean parliament to discuss the region's possible accession to Russia. The parliament of Crimea voted on Thursday to move the referendum date up to March 16 and to include a question on joining Russia.

The Russian parliament has scrambled to introduce legislation that would simplify the procedure for Crimea to join Russia. According to current constitutional law, Russia can only annex foreign territory by an agreement "initiated ... by the given foreign government." Because Crimea is still legally Ukrainian territory, that would entail signing an agreement with new authorities in Kiev, who have condemned Russian moves in the region.

New legislation would sidestep that requirement, according to members of parliament, who said a new bill could be passed as soon as next week.

If the new bill is passed, Crimea would be the first territory to officially join Russia since the breakup of the Soviet Union in 1991. South Ossetia and Abkhazia, which broke away from the Caucasus nation of Georgia after a brief 2008 war with Russia, have been recognized as independent by Moscow, but there have been few serious moves to enable them to join Russia.

Pentagon officials announced Thursday that six U.S. F-15 fighter jets had arrived in Lithuania to bolster air patrols over the Baltics. A U.S. warship, USS Truxtun, is also now in the Black Sea to participate in long-planned exercises.

The U.S. and other Western nations have begun preparing sanctions against Russia for its recent move to send military troops into Ukraine's Crimean Peninsula.

Russia also warned on Friday that any U.S. sanctions imposed regarding the crisis in Ukraine with “boomerang” back on the United States. Foreign Minister Sergei Lavrov “warned against hasty and reckless steps capable of causing harm to Russian-American relations, particularly ... sanctions, which would inevitably hit the United States like a boomerang,'' the Foreign Ministry said during a phone conversation with U.S. Secretary of State John Kerry, according to Reuters.