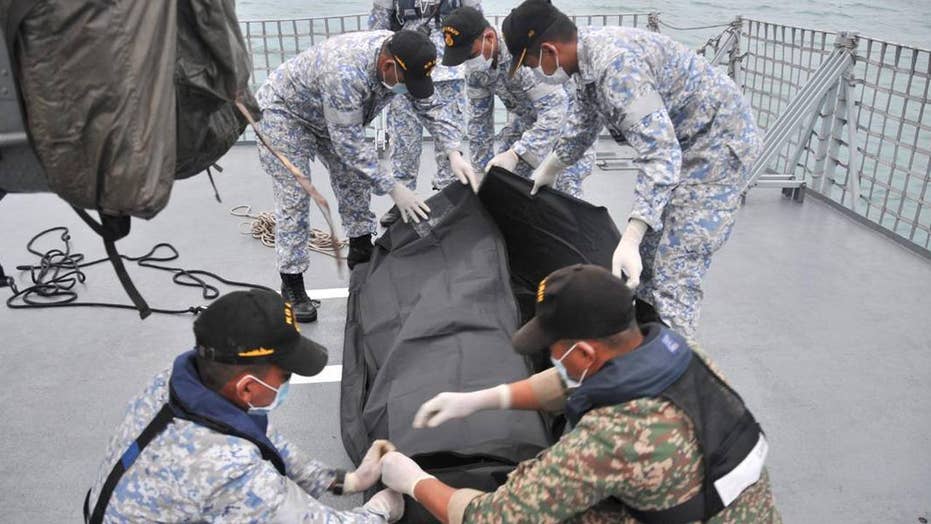 Remains of some of the Navy sailors who went missing after a collision between USS John S. McCain and a tanker near Singapore were found in a compartment aboard the destroyer, Commander of the U.S. Pacific Fleet Adm. Scott Swift said Tuesday.

Swift said "some remains" were found in sealed compartments during their search on Tuesday and Malaysian officials said they found one body, but were still in the process of identifying it.

"We will continue the search and rescue operations until the probability of discovering sailors is exhausted," Swift said, adding that it was "premature to say how many" bodies were discovered at this time.

The Monday collision between USS John S. McCain and the 600-foot Alnic MC, an oil and chemical tanker, left five sailors injured and 10 others missing. U.S. Navy officials told Fox News hours after the incident that diving operations were being carried out in the flooded compartments. The U.S., Singapore and Malaysian navies joined the sea search from Monday into Tuesday.

The crash tore a gaping hole in the destroyer's left rear hull and flooded adjacent compartments. Swift said the USS John S. McCain suffered "significant damage" and the flooding into the destroyer had been controlled. He praised the "tough and resilient" crew for its damage control efforts.

"It is premature to discuss what the outcome will be, but the naval command is sending a team here to do the assessment," Swift said. "They will assess the damage...and determine what repairs are necessary. We are very grateful for the support we're receiving from Singapore."

A full investigation into the incident will be conducted.

The identities of the missing have not been disclosed but Megan Partlow of Ohio said her fiance's parents were in touch with the Navy's family assistance center. Partlow, who said her fiance was on board the McCain, told The Associated Press in a Facebook message that they last communicated on Sunday and she was losing hope of seeing him again.

"My last text to him was 'be safe,' which is the same way we end every conversation. I'm just ready for answers," she said.

The collision was the second major incident in two months involving the Pacific-based 7th Fleet and the fourth major mishap in the Pacific. In June, seven sailors died when USS Fitzgerald and a container ship collided in the waters off Japan. The Navy ordered a pause in 7th Fleet operations to conduct a "broader investigation" into its performance and readiness on Monday.

"While each of these four incidents is unique, they cannot be viewed in isolation," Swift said.

He added the Navy would conduct an investigation "to find out if there is a common cause ... and if so, how do we solve that."