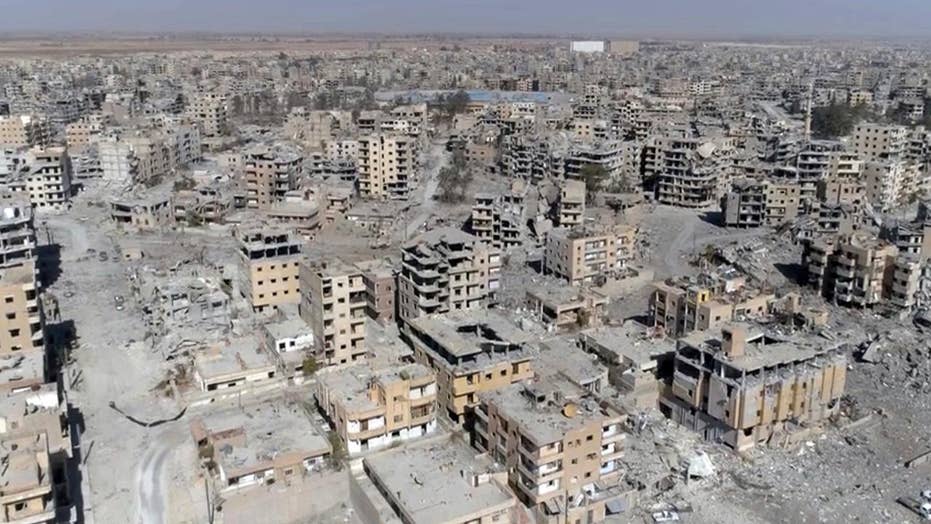 Secretary Tillerson cautions the fight against the terror group is far from over.

The fall of the final ISIS stronghold of Raqqa – the terror group’s self-declared caliphate capital – by the Kurdish-led, U.S-backed Syrian Democratic Forces (SDF) last week has heralded much celebration.

But as the jubilation dies down, what remains is little more than smoldering rubble from air bombardment, akin to an apocalyptic wasteland. So whose burden is it to restore the ruined Raqqa?

Members of the U.S.-backed Syrian Democratic Forces (SDF) walk in a stadium that was the site of Islamic State fighters' last stand in the city of Raqqa, Syria, Friday, Oct. 20, 2017. Syrian Kurdish-led forces backed by the U.S. declare victory in the devastated northern city of Raqqa days after it cleared it from members of the Islamic State group. (AP Photo/Asmaa Waguih) (Asmaa Waguih)

“It is the responsibility of all countries, especially the U.S. and the Coalition because the Coalition’s airstrikes and artillery shelling were ‘half’ responsible for destroying Raqqa, the other half goes to ISIS car bombings,” local activist Sarmad Al Jilane, former CEO at Raqqa is Being Slaughtered Silently and now an advocacy expert at human rights media group Sound and Picture, told Fox News. “Around eighty percent of Raqqa is destroyed, and the rest is damaged.”

While the cost in lives goes far beyond any dollar amount – as tens of thousands of Raqqa residents have been run from their homes and livelihood with thousands more dead and disabled from almost four years of ISIS occupation – the return to any sense of normalcy will require billions.

According to the latest figures released by the Pentagon, U.S taxpayers have already spent an average of $13.6 million per day to fight ISIS in Iraq and Syria since August 8, 2014 – just under $1.6 billion – of which the largest portion was shouldered by the Air Force. So should the U.S bear the responsibility of rebuilding?

A view of destroyed buildings at the frontline in Raqqa, Syria October 16, 2017 (REUTERS/Erik De Castro)

Statistics released by monitoring group Air Wars claimed that U.S-led forces dropped 5,775 bombs, shells and missiles in the month of August alone – and more than 20,000 throughout the three-year campaign. While the U.S. has assumed much of the costs and planning to defeat ISIS in the Middle East, U.S Secretary of State Rex Tillerson earlier this year warned the international community that reconstruction will “require more from you.”

“The U.S has spent billions and took a big responsibility to get rid of ISIS. ISIS is a threat not only to the U.S but to the whole world, so the whole international community should be addressing the issue of rebuilding the city,” affirmed Bassam Barabandi, a Syrian diplomatic defector and now a political adviser to the official opposition negotiations team at the Syrian High Negotiations Committee.

A spokesperson for Operation Inherent Resolve, the U.S name given to the mission to defeat ISIS, told Fox News that the rebuilding of Raqqa will be overseen by the Raqqa Civil Council, a local governing body that has been put in charge since the liberation. The U.S has “no defined role in reconstruction,” the spokesperson said, and will remain focused on the final defeat of ISIS from pockets across Iraq and Syria.

The coalition is continuing to provide training to the SDF, thus funding such endeavors as the detection and removal of explosive ordnance, which have already killed members of at least nine families attempting to return to their homes in the city post-liberation.

The coalition also provides security and logistical support to the local council and to non-governmental agencies, to assist in rebuilding homes, buildings and medical buildings as well as restoring electricity and providing potable water.

AMERICA'S ROLE IN YEMEN WAR MUST END, US LAWMAKERS DEMAND

FILE - This March 7, 2017 file frame grab from video provided by Arab 24 network, shows U.S. forces patrolling on the outskirts of the Syrian town of Manbij, in Aleppo province, Syria. Syrian government and allied troops have inserted themselves into the battle against Islamic State militants by capturing key areas on the flanks of the coalition-led battle to seize Raqqa. They have positioned themselves as indispensable possibly spoilers in the fight to uproot the militants from Syria. (Arab 24 network, via AP, File)

However, some Syrians are warning that there are already glaring fractions within the Raqqa Civil Council, whose job ultimately is to plan the restoration and maintain its security. Syrians told Fox News that the council’s loyalties are largely divided.

The U.S intention was for representatives from both Kurdish and Arab tribes in Raqqa province to join the council, and receive SDF support. However, Raqqa is traditionally an overwhelmingly Sunni Arab-populated city, and a prominent portion would rather not be aligned with SDF but with Turkish forces, also Sunni Arabs, who view the Kurdish fighters as the enemy.

“Many of the Arab tribes didn’t even want to attend the liberation celebrations,” one Syrian insider told Fox News. “There is already a push to form a new council with new leadership.”

Al Jilane also argued that many members of the civil council “are not locals of Raqqa,” and for civilians to feel confident in returning, “locals and activists should be the ones in charge.”

Raqqa under ISIS, where residents were forced to live under Shariah law (Courtesy Sound and Picture)

In an effort to try and mobilize some of the disenfranchised Sunni tribesman and council members, Syrian sources said, Saudi Affairs Minister Thamer al-Sabhan visited Raqqa late last week alongside U.S special envoy to the coalition against ISIS, Brett McGurk, to meet with the Raqqa Civil Council.

It is believed Saudi Arabia – a prominent backer of opposition forces against the Assad regime – is mulling a request to significantly contribute to the rebuilding, in return for influence among the tribes.

While Syria’s embattled President Bashar al-Assad has insisted he intends to take back the entire country after more than six years of civil war, the U.S. has maintained that the territory is not to be returned into the dictator’s hands.

“The U.S. in partnership with allies including Gulf States like Saudi Arabia and the United Arab Emirates will work as part of a stabilization effort. But we must ensure that not a single dollar goes into areas under control of the Assad regime,” noted Tony Badran, a research fellow at the Foundation for Defense of Democracies (FDD). “Otherwise, we would be paying Assad and Iran for having destroyed the country and ethnically cleansed its population.”

National Security Advisor H.R. McMaster concurred last week at an FDD that it is U.S. policy to ensure that absolutely no money goes to reconstructing anything that is under the regime’s control. However, Badran cautioned that the Russians are working in parallel to “create arrangements between the Kurdish-controlled areas and Damascus,” which means that if the U.S. wants to vigorously enforce that policy and maintain influence in the Raqqa region, it must now develop a broader plan beyond just defeating ISIS.

“Without a broader plan,” he cautioned. “The various local forces will make their own decisions and arrangements, and these would likely play out against our interests.”