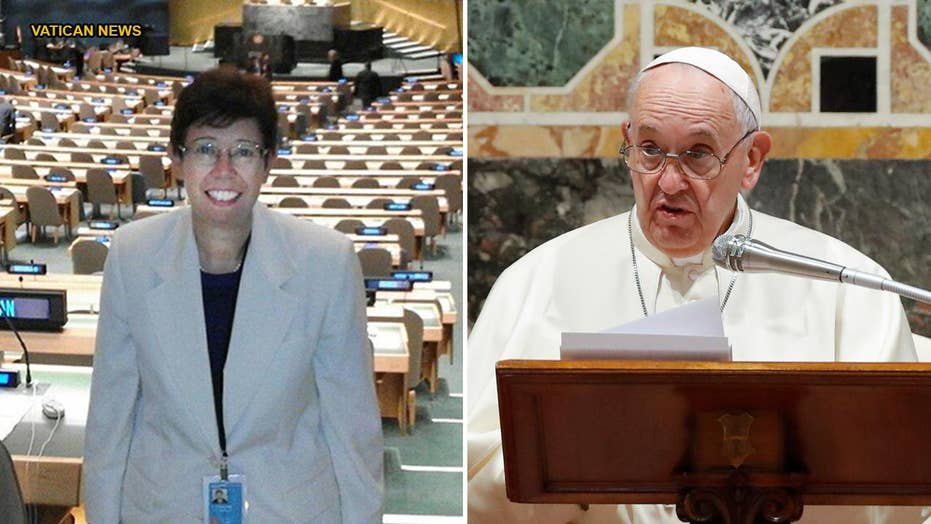 Pope Francis has announced that for the first time a woman is being appointed to a managerial role in the Secretariat of State for the Vatican. The appointment of Francesca Di Giovanni is seen as a monumental decision by Pope Francis, as the leadership of the Roman Catholic Church is almost completely dominated by men. Fox News Vatican expert Jonathan Morris weighs in on the importance of such an announcement.

In a rare move, Pope Francis has for the first time chosen a woman to hold a high-level position in the Vatican's Secretariat of State, one of its most important offices.

Francesca Di Giovanni, a lawyer and 27-year veteran of the Vatican, was named Wednesday as the undersecretary of the powerful office's Section for Relations with States. She will oversee a division that coordinates the Holy See's relations with the United Nations and other intergovernmental groups. The Secretariat of State is responsible for the Vatican's diplomatic relations with other countries.

The move comes as Francis has called for women to be given greater decision-making roles in the male-dominated Vatican. Di Giovanni told the state-run Vatican News that she was surprised by the appointment.

"The Holy Father has made an unprecedented decision, certainly, which, beyond myself personally, represents an indication of an attention toward women," she said. "I hope that my being a woman might reflect itself positively in this task, even if they are gifts that I certainly find in my male colleagues, as well."

Other women with prominent roles in the Vatican are Barbara Jatta, who was appointed as director of Vatican Museums in 2016, and former Vatican Radio journalist Cristiane Murray, who serves as the deputy director of the Holy See press office.

Pope Francis greets a group of nuns during his weekly general audience, in Paul VI Hall at the Vatican on Wednesday. Francis has appointed Francesca Di Giovanni as the undersecretary of multilateral affairs in one of the Vatican's most powerful offices. (AP Photo/Alessandra Tarantino)

"My hope is that his action might signal future appointments of talented, capable women to other Vatican dicasteries and departments," Hinsdale, an associate professor of theology at Boston College, told the National Catholic Reporter. "It's about time!"