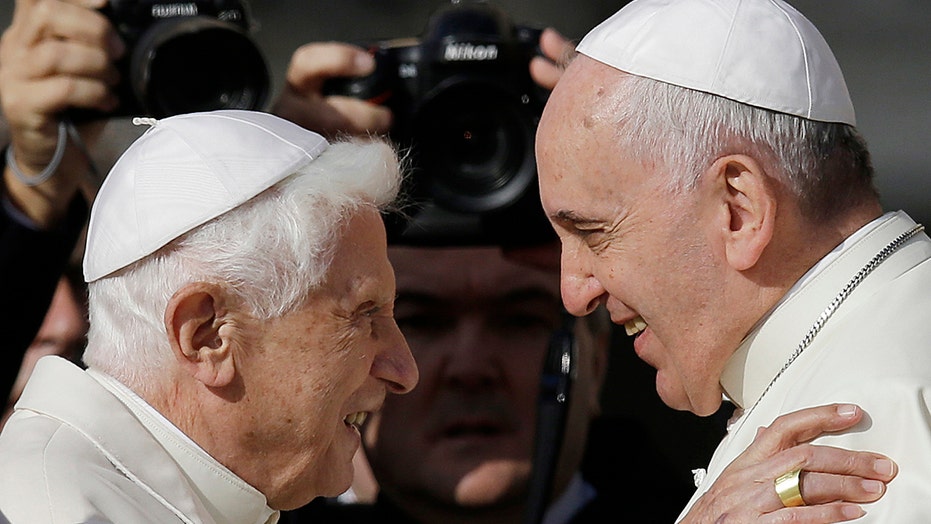 Retired Pope Benedict XVI has reemerged as the co-author of a new book expressing his belief in priestly celibacy, a potential point of conflict with Pope Francis after bishops in the recent synod on the Amazon called for the ordination of married men as priests to address the Roman Catholic priest shortage.

After he vowed to remain “hidden from the world” and pledge obedience to the new pope when he retired in 2013, Benedict's book, entitled “From the Depths of Our Hearts: Priesthood, Celibacy and the Crisis of the Catholic Church," made the case that celibacy was a necessary foundation of the priesthood.

“The priesthood of Jesus Christ causes us to enter into a life that consists of becoming one with him and renouncing all that belongs only to us," Benedict wrote, according to excerpts from the English version which The Associated Press obtained. “For priests, this is the foundation of the necessity of celibacy but also of liturgical prayer, meditation on the Word of God and the renunciation of material goods.”

Marriage, he wrote, required man to give himself totally to his family. “Since serving the Lord likewise requires the total gift of a man, it does not seem possible to carry on the two vocations simultaneously. Thus, the ability to renounce marriage so as to place oneself totally at the Lord’s disposition became a criterion for priestly ministry.”

Co-authored by Guinean Cardinal Robert Sarah, who has led the Vatican's liturgy office and was seen as a silent critic of Francis, the book weighed in on a controversial topic that has taken the spotlight since Francis floated the opinion that celibacy was a tradition, not doctrine, suggesting exceptions could be made to accept married priests into the church.

Pope Francis, right, hugging Pope Benedict XVI prior to the start of a meeting with elderly faithful in St. Peter's Square at the Vatican in 2014. (AP Photo/Gregorio Borgia, File)

A majority of bishops at the synod in October said married men should be ordained to offer a supply for the shortage of priests. Francis has said he would write a document based on the outcome of that meeting.

Benedict's book could be considered a public attempt by the retired pope to sway the thinking of the current pope.

The implications for such an intervention are likely to fuel renewed anxiety about the unprecedented situation of two popes, but both authors wrote in the book that it was written “in a spirit of filial obedience to Francis.”