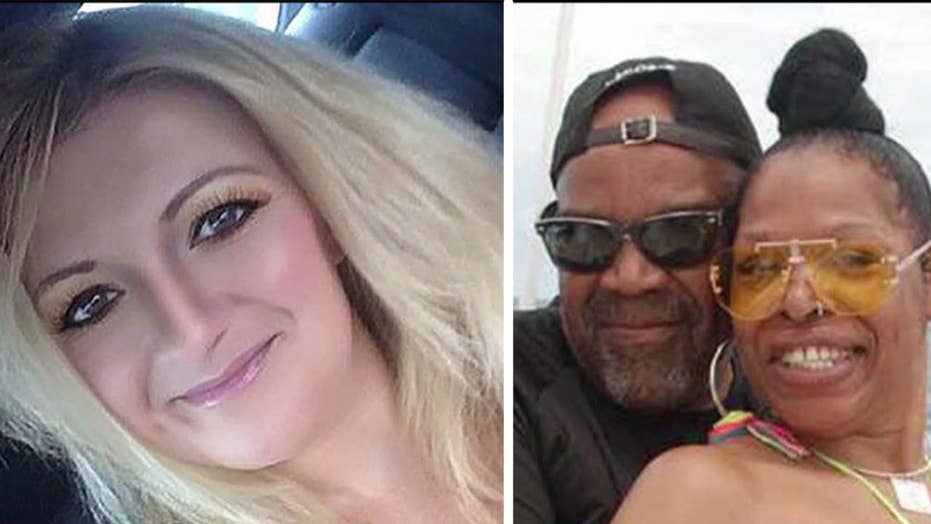 Miranda Schaup-Werner from Pennsylvania died on May 25th; Edward Nathaniel Holmes and his fiancee Cynthia Day were found dead in their room there five days later.

A Pennsylvania woman who was vacationing with her husband in the Dominican Republic died suddenly in her room, five days before a couple from Maryland passed away in their room at the same resort complex in similar circumstances, Fox News has learned.

The woman, identified by a relative as Miranda Schaup-Werner, a 41-year-old psychotherapist from Allentown, Pa., collapsed on May 25 after having a drink from the mini-bar at the all-inclusive Bahia Principe Bouganville, her relative told Fox News.

Five days later, engaged couple Edward Nathaniel Holmes and Cynthia Day, were found dead in their room -- at the adjacent Bahia Principe Hotel -- by a resort employee who went in after they failed to check out. They had coincidentally arrived the same day Schaup-Werner passed away.

The U.S. State Department on Tuesday confirmed the death to Fox News, saying: "We can confirm the recent deaths of three U.S. citizens in La Romana, the Dominican Republic - Nathaniel Edward Holmes, Cynthia Ann Day, and Miranda Schaup-Werner.  We offer our sincerest condolences to the families for their loss. The U.S. Embassy is actively monitoring the investigations by Dominican authorities into these tragic deaths.  We stand ready to provide assistance as requested."

"The U.S. Department of State and our embassies and consulates abroad have no greater responsibility than the protection of U.S. citizens overseas.  Out of respect to the family during this difficult time, we have no further comment."

"Mrs. Schaup Werner, who was a guest of Luxury Bahia Principe Bouganville, was found unresponsive in her room on May 25," the statement said. "Following established protocols, the hotel doctor responded immediately and coordinated her transfer to Hospiten Santo Domingo. Unfortunately, Mrs. Schaup passed away in the room prior."

"In the days that followed, we provided our complete support to Mr. Werner in collaboration with local authorities and the U.S. Embassy. We are deeply saddened by this situation and express our deepest condolences to the family and friends of the deceased."

The relatives of all three U.S. citizens are raising questions about the deaths, noting that they occurred suddenly.

In all three cases, Dominican authorities said that an autopsy gave the same apparent cause of death – respiratory failure and pulmonary edema, which is caused by excess fluid in the lungs. The Regional Institute of Forensic Sciences said that, in the case of Holmes and Day, further tests are required.

Officials say the couple arrived at the Bahía Príncipe hotel in La Romana on May 25 and planned to leave May 30, the day they were found after they failed to check out. Police say several bottles of medicines to treat high blood pressure were found on the scene, though the relevance to their simultaneous deaths was not made clear.

The Bahia Principe resort group's statement to Fox News said that Schaup "had suffered from heart conditions in the past." They said that her husband had mentioned her past heart condition during an interview with Dominican authorities.

“It was very quick,” said Jay McDonald, who is acting as the family spokesman for his brother-in-law, Daniel Werner, Miranda’s husband.

“Daniel and all of us are in a state of disbelief, we are shocked. She was perfectly content, everything seemed fine.”

McDonald said that Schaup had been diagnosed with inflammation around the heart 15 years ago, and sought treatment for it, but that she was cleared medically afterward. He said it seemed the hotel and others were trying to mislead the public about what caused Schaup's death.

Schaup posted photos of her vacation, including of her hotel room, on her Facebook page. She and Werner were celebrating their ninth wedding anniversary.

McDonald, a business marketing executive, said that Daniel Werner told him that Schaup and he were in their room, before she had an alcoholic drink, sat down and took a selfie, and then stood up.

At that point, he said his brother-in-law told him, “She started shrieking and she dropped to the floor. He attempted to do CPR, he tried to resuscitate her.”

“At that point, they just declared her dead,” McDonald said, adding that the authorities “did a very cursory [look] into determining the cause of death.”

McDonald said the family was stunned by the news of the death of the Maryland couple at the very same hotel group -- the buildings are nearly side-by-side and have the same owner -- just five days later, and under mysterious circumstances.

Authorities in the Dominican Republic announced that they believe they have discovered the bodies of Orlando Moore and Portia Ravenelle, an American couple missing since late last month. The couple vanished while leaving their hotel in the Dominican Republic after a getaway to the Caribbean island, and never boarded their flight home. Police say they believe the couple was in a car crash on Las Americas highway while on their way to the airport.

“That was beyond coincidence,” he said. “They died five days after, and the cause was determined to be the same, this just puts this whole thing through the stratosphere – something is going on, and we want to know what it is.”

“We also want to know why her death was treated in such a cursory manner.”

McDonald said the family, which he says has been in touch with the U.S. State Department and the U.S. Embassy in the Dominican Republic, wants Schaup's body to be returned to the U.S. They expect the body to be sent back to them this week, he said, perhaps as soon as tomorrow.

"[Daniel] wants his wife's body home," he said, "we want [an investigation] to be done domestically."